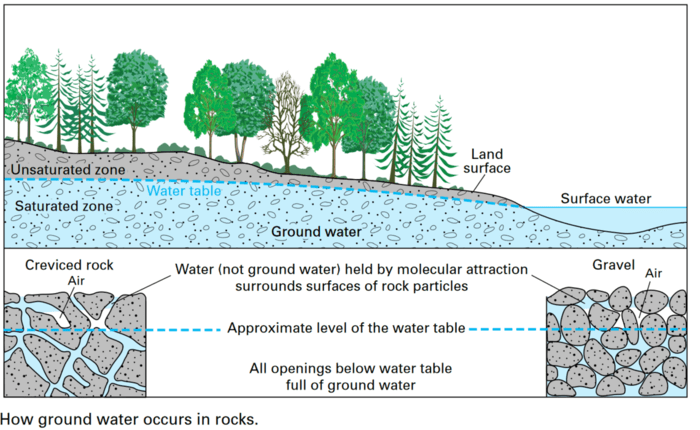 Along with hurricanes and wildfires, there’s another important, but seldom-discussed effect of climate change — toxic water and sinking land made worse by groundwater drought.

Water from snow and rain seeps deep into the ground between layers of soil and accumulates in sponge-like underground bathtubs, called aquifers. Farmers rely heavily on this groundwater to irrigate their crops when they can’t get enough water from surface water sources.

Roughly 85 percent of Californians also rely on groundwater for some portion of their water supply. Worldwide, an estimated two billion people depend on it. However, excessive groundwater use combined with droughts has caused land surface to sink, damaging critical infrastructure including roads, buildings, and sewage and water pipes.

New UC Riverside research shows groundwater takes an average of three years to recover from drought — if it ever recovers at all. In the largest study of its kind, scientists found that this recovery time only applies to aquifers that aren’t touched by human activity, and the recovery time might be even longer in regions with excessive pumping.

For groundwater levels to recover after a drought, new precipitation requires time to percolate through the soil and recharge the depleted aquifer. The researchers show that this process can take several years longer in areas with deeper groundwater levels.

“If people pump groundwater without first letting it recharge, groundwater levels keep going down, the cost of pumping goes up, and the land sinks,” explained Hoori Ajami, UCR groundwater hydrologist and study co-author and principal investigator on this project.

Published in the Journal of Hydrology, the new study is the first to examine groundwater response to droughts on a continental scale. Previous investigations of groundwater drought have mostly relied on model simulations and covered smaller areas. This study relied on 30 years of daily measurements from 600 wells across the country.

On average, the researchers determined it takes about two years for rainwater drought to become groundwater drought, though in some cases it takes as long as 15 years. Because of the long lag time, the effects aren’t felt or seen immediately. However, they can be severe.

Groundwater drought combined with pumping can cause a gradual, uneven lowering of the land surface called subsidence. “It is a known problem in California’s Central Vaalley, exacerbated by climate factors and excessive water pumping,” Ajami said. “Subsidence causes irreversible damage to infrastructure, buildings and roads.”

As the ground shifts and water level declines, contaminants in the soil, like arsenic, can mobilize and poison the water. In coastal areas, aquifers depleted by drought and pumping can fill up with salty sea water, making groundwater unusable for drinking or farming.

To reduce the damage from prolonged droughts that are an inevitability as the planet continues to warm, the researchers have several recommendations. Most climate models show rain becoming more intense. Storing rain waters could recharge aquifers, speeding up the recovery process.

The researchers also suggest that farmers improve irrigation efficiency and switch perennials like almonds, pistachios, and walnuts to annual, less water-intensive crops in areas where groundwater depletion is severe.

“We need to improve our climate projections to include groundwater, so that we can better assess what we have and how to protect it,” Ajami said. “There are ways to better manage what we have.”