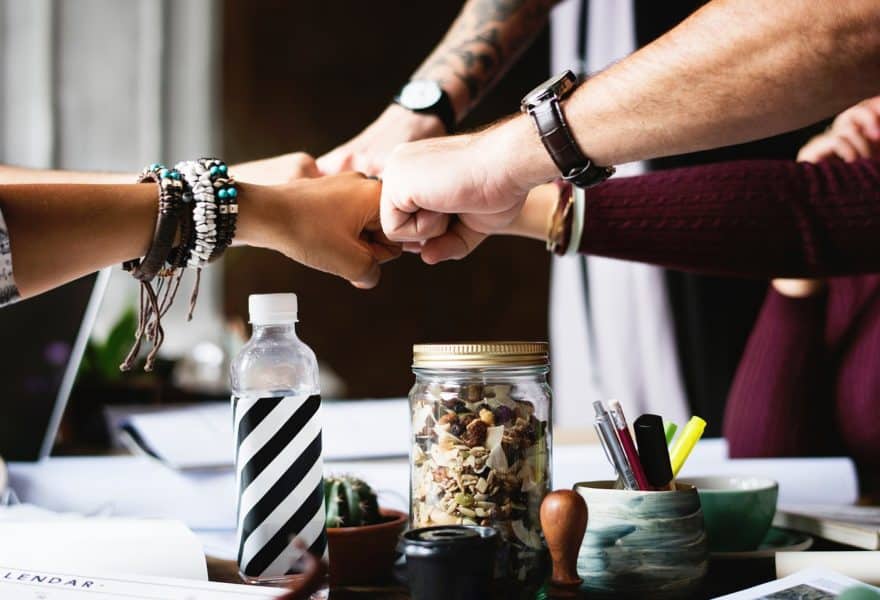 Over the last year, handshakes have been replaced by fist or elbow bumps as a greeting. It shows that age-old social conventions can not only change, but do so suddenly. But how does this happen? Robotic engineers and marketing scientists from the University of Groningen joined forces to study this phenomenon, combining online experiments and statistical analysis into a mathematical model that shows how a committed minority can influence the majority to overturn long-standing practices. The results, which were published in Nature Communications on 29 September, may help to stimulate sustainable behaviour.

How does complex human behaviour take shape? This is studied in many ways, mostly relying on lots of data from observations and experiments. Ming Cao, Professor of Networks and Robotics at the Faculty of Science and Engineering at the University of Groningen, has studied complex group behaviour in robots by using agent-based simulations, among other methods. These agents follow a limited number of simple rules, often inspired by nature, which can lead to realistic complex behaviour. ‘Swarming birds or schools of fish are a good example’, Cao explains, ‘their movements can be reproduced by agents that follow a few simple rules on keeping a certain distance and heading in the same direction as their neighbours.’

In parallel, the Marketing research group at the Faculty of Economics and Business, led by Dr Jan Willem Bolderdijk, Dr Hans Risselada, and Prof. Bob Fennis, has carried out various research projects into human behaviour, but not so many using these kinds of agent-based models. After a discussion with Cao and his colleagues, both groups saw possibilities for such models. Consequently, marketing PhD student Zan Mlakar and the two post-doc researchers in Cao’s group, Mengbin Ye and Lorenzo Zino, worked together creating an online experiment to gather data on the social diffusion of new behavioural trends.

They developed an online game in which 12 participants act as board members of a company that plans to launch one of two potential products. The participants have to vote on which product to launch. The catch is that the decision has to be taken unanimously. The participants cannot discuss their choice, they vote in 24 consecutive rounds, and they only see the distribution of votes at the end of each round. If unanimity is reached, the participants receive a reward.

Unknown to the participants, between two to four participants in the groups studied were computer bots, programmed to stick to their choice. ‘If the majority voted for product A in the first round, the bots were set to vote for B to try and overturn the majority’, explains Ye, who now works as Senior Research Fellow at Curtin University in Australia. Meanwhile, the votes of the human participants over all the rounds studied were registered. The vast majority of over 20 of these online game rounds resulted in a unanimous vote, with humans eventually siding with the bots to vote for product B. The results of all the games were then analysed to look for patterns in the voting decisions of the human participants.

Ye: ‘In quite few cases, we saw a delay before the votes started changing, but when they did, the group would reach unanimity in just a few voting rounds.’ The overall voting behaviour was able to be reproduced in an agent-based model with three simple rules: do as the majority does, stick to your previous decision, and follow the trend. ‘These rules are acknowledged in the literature as group coordination, inertia, and trend-seeking’, explains Ye. ‘They have been separately studied in human behaviour, but never combined in one model; this combination was critical in capturing social change.’

The results of the experiments and the simulations show that new conventions can suddenly arise when the influence of a committed minority reaches a threshold. A small group of ‘activists’ can therefore change social conventions. Cao: ‘However, this only happens if the minority is also able to influence others in their network. And this depends on the amount of risk-taking present among the other voters.’ The team are now interested in exploring what might enhance or inhibit this risk-taking behaviour. ‘We now have a solid framework and a model, which can be used to examine environmental factors that might make people have greater inertia, or be more susceptible to trends’, says Ye.

The three basic rules could help in steering the behaviour of large groups. ‘Of course, we can’t control people’, stresses Cao. ‘But we can provide guidelines, for example on how to nudge people to change their behaviour.’ This could be useful in the energy transition, or in getting people to reduce their meat consumption. ‘Governments already spend money to convince people to adopt more sustainable behaviour. Our research can help them to spend it in a more effective way.’