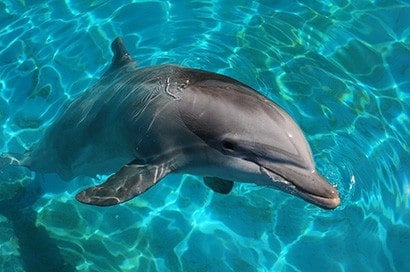 Just published in De Gruyter, a new report coauthored by PETA Foundation Supervising Wildlife Veterinarian Dr. Heather Rally exposes the neural impact that marine parks and other “impoverished environments” likely have on cetaceans, such as bottlenose dolphins. Prior to this paper’s publication, relatively little attention had been paid to the brains of cetaceans who live in cramped and artificial settings.

In the report, the authors outline how concrete tanks in marine parks are—at best—about 10,000 times smaller than cetaceans’ natural home ranges and that animals in these parks often display abnormal types of behavior, such as repetitive swimming patterns, gnawing on hard surfaces, and lying motionless at the bottom of tanks. Arguing that cetaceans exhibit abnormalities similar to those of other mammals in impoverished environments and possess very similar neurobiological systems, the authors conclude that marine parks have a negative neurobiological impact on cetaceans and call for the release of these animals to coastal sanctuaries.

“Denying these animals the chance to dive deep, swim long distances, forage, and socialize on their own terms takes a significant neurobiological toll,” says Dr. Rally. “PETA urges SeaWorld and other marine parks to put plans in place to transfer these long-suffering cetaceans to sanctuaries—it would be the kind and scientifically sound thing to do.”

At seaside sanctuaries, once-captive bottlenose dolphins and other cetaceans could thrive in safe and spacious ocean coves while still receiving care, feeding, and veterinary support. PETA notes that the 60 experts on the board of The Whale Sanctuary Project have endorsed seaside sanctuaries and that the National Aquarium in Baltimore is creating a seaside sanctuary for the dolphins in its care.