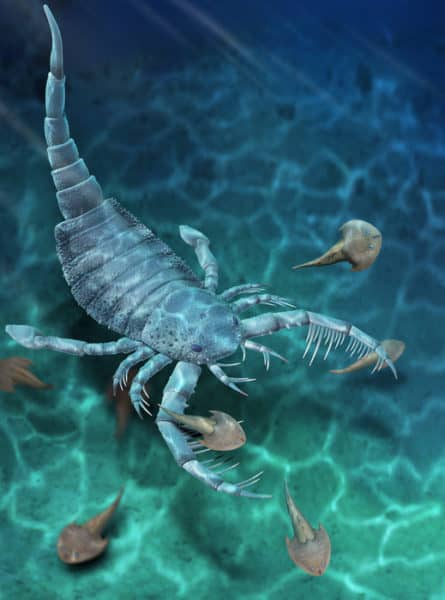 Eurypterids, normally known as sea scorpions, are an important group of Paleozoic chelicerate arthropods. They first appeared in the Ordovician, reached their peak of diversity in the Silurian, then declined, and were completely extinct by the end of the Permian.

Mixopterids are a remarkable group of eurypterids characterized by extremely specialized prosomal appendages. These limbs were presumably used for prey-capture, like the “catching basket” formed by the spiny pedipalps of whip spiders.

Recently, doctoral researcher WANG Han and Prof. WANG Bo from the Nanjing Institute of Geology and Palaeontology of the Chinese Academy of Sciences (NIGPAS), in collaboration with other researchers from China, Germany and England, described a new mixopterid, Terropterus xiushanensis gen. et sp. nov., from the Lower Silurian of South China. It’s the first mixopterid in Gondwana, and also the oldest mixopterid.

“Our knowledge of mixopterids is limited to only four species in two genera, which were all based on a few fossil specimens from the Silurian Laurussia 80 years ago,” said Prof. WANG.

This study, published in Science Bulletin, expands our understanding of the morphological diversity and geographical distribution of mixopterids.

Terropterus is relatively large, estimated to be nearly a meter in length. It features a particularly enlarged prosomal limb III, characterized by a unique arrangement of spines.

The well-preserved appendages and other body part fossils provide new evidence for expanding the morphological diversity of Mixopteridae. By morphological comparison and phylogenetic analysis, the researchers revealed more complex evolutionary relationships for this group than previously thought.

Large predators have not yet been found in the Early Silurian shallow marine environment of South China. Terropterus, a large arthropod with a “sharp weapon,” may have played an important role as one of the top predators in this environment.

This first Gondwanan mixopterid, along with other eurypterids from China and some undescribed specimens, suggests an under-collection bias in this group. Future work, especially in Asia, may reveal a more cosmopolitan distribution of mixopterids and perhaps other groups of eurypterids.