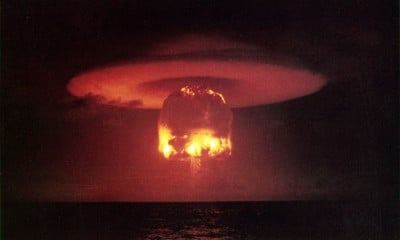 Nuclear weapon test on Bikini atoll in 1954. (Image from U.S. Department of Energy.)

The massive columns of smoke generated by a nuclear war would alter the world’s climate for years and devastate the ozone layer, endangering both human health and food supplies, new research shows.

The international study paints an even grimmer picture of a global nuclear war’s aftermath than previous analyses. The research team used newly developed computer climate modeling techniques to learn more about the effects of a hypothetical nuclear exchange, including complex chemistry interactions in the stratosphere that influence the amounts of ultraviolet (UV) radiation that reach the planet’s surface.

“In addition to all the fatalities that would happen almost immediately, the climate effects and the UV effects would be widespread,” said lead author Charles Bardeen, a scientist at the National Center for Atmospheric Research (NCAR). “These aren’t local to where the war occurs. They’re global, so they would affect all of us.”

Since the ozone layer protects Earth’s surface from harmful UV radiation, such impacts would be devastating to humans and the environment. High levels of UV radiation have been linked to certain types of skin cancer, cataracts, and immunological disorders. The ozone layer also protects terrestrial and aquatic ecosystems, as well as agriculture.

“Although we suspected that ozone would be destroyed after nuclear war and that would result in enhanced ultraviolet light at the Earth’s surface, if there was too much smoke, it would block out the ultraviolet light,” said study co-author Alan Robock, a professor of climate science at Rutgers University. “Now, for the first time, we have calculated how this would work and quantified how it would depend on the amount of smoke.”

The study was funded by the Open Philanthropy Project with computational support from the National Science Foundation, which is NCAR’s sponsor, as well as from the University of Colorado Boulder and Colorado State University. It was published in the Journal of Geophysical Research — Atmospheres, a publication of the American Geophysical Union.

Scientists in the 1980s found that the enormous amounts of smoke from a nuclear war would cool the planet by blocking incoming sunlight, an outcome known as a “nuclear winter.” They also found that a nuclear war would destroy ozone because of chemical reactions involving nitrogen oxides produced from the fireball created by a nuclear weapon explosion.

Subsequent research, however, suggested that the smoke would also cause ozone loss by heating the stratosphere, which changes chemical reaction rates, and by reducing photochemistry (chemical reactions caused by sunlight).

In the new study, the authors explored how much the reduced photochemistry would affect ozone destruction, as well as the extent to which the smoke would protect the surface from UV radiation. They calculated, for the first time, the combined effects of nitrogen oxides, stratospheric heating, and reduced photochemistry on stratospheric ozone chemistry and surface UV resulting from a global nuclear war.

The research team combined four advanced NCAR-based computer models: the Community Earth System Model, which simulates global climate; the Whole Atmosphere Community Climate Model, which simulates higher regions of the atmosphere; the Tropospheric Ultraviolet and Visible Radiation Model, which calculates the light available for photolysis and the amount of UV radiation that reaches the surface; and the Community Aerosol and Radiation Model for Atmospheres, which provides an advanced treatment of smoke particles.

The results highlighted the importance of using sophisticated modeling techniques to flesh out the complexities of the atmosphere. In the case of the global nuclear war, for example, the simulations showed that massive injection of smoke into the stratosphere would initially cool surface temperatures by blocking sunlight, alter precipitation patterns, shield the planet from incoming UV radiation, while also destroying the protective ozone layer. Within a few years, however, the smoke would begin to dissipate and far more UV radiation would reach the surface through the diminished ozone layer.

“Conditions would switch dramatically, and adaptations that may work at first won’t help as temperatures warm back up and UV radiation increases,” Bardeen said. “Just as the smoke is clearing up, you would get this blast of UV with completely different impacts on human health and agriculture.”

In contrast, a regional nuclear war that generated less smoke would result in a more straightforward pattern, with UV increasing right away while surface temperatures are decreasing and the ozone layer gradually recovering as the smoke dissipates.