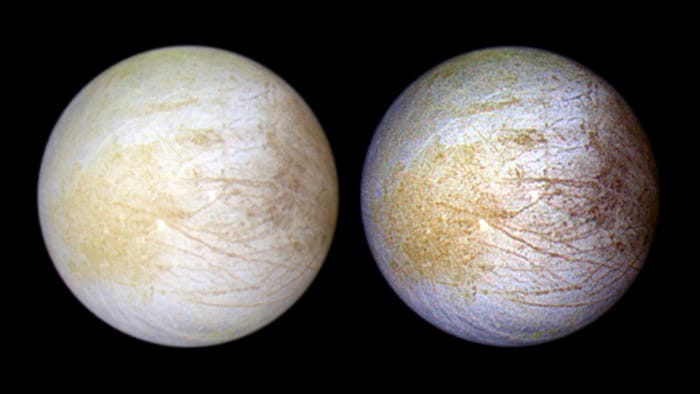 This photograph of the Jovian moon Europa was taken in June 1997 at a range of 776,700 miles by NASA's Galileo spacecraft. Slightly smaller than Earth's moon, Europa has a very smooth surface and the solid ice crust has the appearance of a cracked eggshell. The interior has a global ocean with more water than found on Earth.

NASA’s Hubble Space Telescope observations of Jupiter’s icy moon Europa have revealed the presence of persistent water vapor – but, mysteriously, only in one hemisphere.

Europa harbors a vast ocean underneath its icy surface, which might offer conditions hospitable for life. This result advances astronomers’ understanding of the atmospheric structure of icy moons, and helps lay the groundwork for planned science missions to the Jovian system to, in part, explore whether an environment half-a-billion miles from the Sun could support life.

Previous observations of water vapor on Europa have been associated with plumes erupting through the ice, as photographed by Hubble in 2013. They are analogous to geysers on Earth, but extend more than 60 miles high. They produce transient blobs of water vapor in the moon’s atmosphere, which is only one-billionth the surface pressure of Earth’s atmosphere.

The new results, however, show similar amounts of water vapor spread over a larger area of Europa in Hubble observations spanning from 1999 to 2015. This suggests a long-term presence of a water vapor atmosphere only in Europa’s trailing hemisphere – that portion of the moon that is always opposite its direction of motion along its orbit. The cause of this asymmetry between the leading and trailing hemisphere is not fully understood.

This discovery is gleaned from a new analysis of Hubble archival images and spectra, using a technique that recently resulted in the discovery of water vapor in the atmosphere of Jupiter’s moon Ganymede, by Lorenz Roth of the KTH Royal Institute of Technology, Space and Plasma Physics, Sweden.

“The observation of water vapor on Ganymede, and on the trailing side of Europa, advances our understanding of the atmospheres of icy moons,” said Roth. “However, the detection of a stable water abundance on Europa is a bit more surprising than on Ganymede because Europa’s surface temperatures are lower than Ganymede’s.”

Europa reflects more sunlight than Ganymede, keeping the surface 60 degrees Fahrenheit cooler than Ganymede. The daytime high on Europa is a frigid -260°F. Yet, even at the lower temperature, the new observations suggest water ice is sublimating – that is, transforming directly from solid to vapor without a liquid phase – off Europa’s surface, just like on Ganymede.

To make this discovery, Roth delved into archival Hubble datasets, selecting ultraviolet observations of Europa from 1999, 2012, 2014 and 2015 while the moon was at various orbital positions. These observations were all taken with Hubble’s Space Telescope Imaging Spectrograph (STIS). The ultraviolet STIS observations allowed Roth to determine the abundance of oxygen – one of the constituents of water – in Europa’s atmosphere, and by interpreting the strength of emission at different wavelengths he was able to infer the presence of water vapor.

This detection paves the way for in-depth studies of Europa by future probes including NASA’s Europa Clipper and the Jupiter Icy Moons Explorer mission from the European Space Agency (ESA). Understanding the formation and evolution of Jupiter and its moons also helps astronomers gain insights into Jupiter-like planets around other stars.

These results have been published in the journal Geophysical Research Letters.

The Hubble Space Telescope is a project of international cooperation between NASA and ESA. NASA’s Goddard Space Flight Center in Greenbelt, Maryland, manages the telescope. The Space Telescope Science Institute (STScI) in Baltimore, Maryland, conducts Hubble science operations. STScI is operated for NASA by the Association of Universities for Research in Astronomy in Washington, D.C.