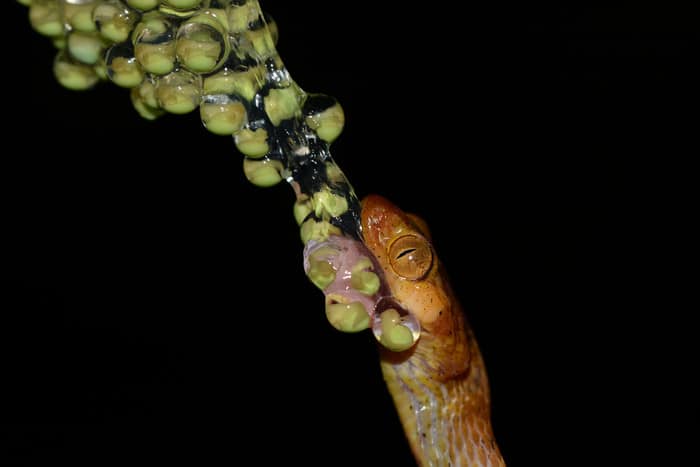 The remarkable diversification of mammals and birds after the demise of the dinosaurs 66 million years ago is well known; but what happened to the snakes? According to a study publishing October 14th in the open-access journal PLOS Biology by Michael Grundler at the University of California, Los Angeles and Daniel Rabosky at the University of Michigan, snakes experienced a similarly spectacular burst of evolution from unassuming insectivorous ancestors to diverse lineages that included the newly available birds, fish and small mammals in their diets.

The K-Pg mass extinction event 66 million years ago – during which 75% of species, including all non-avian dinosaurs, went extinct – marked the beginning of the Cenozoic era and opened a myriad of empty niches for the surviving species to exploit. Like mammals and birds, snakes diversified rapidly during the Cenozoic era, resulting in the nearly 4,000 species that we see today.

To better understand the pace and sequence of this phenomenon, the researchers collated published data on the diets of 882 living snake species and used sophisticated mathematical models to reconstruct how the diets of their ancestors changed and diversified since the K-Pg boundary. They found that the most recent common ancestor of living snakes was insectivorous, but after the K-Pg boundary, snake diets rapidly expanded to include birds, fish, and small mammals – vertebrate groups that were also flourishing in the wake of the dinosaurs’ extinction.

“Much of the stunning ecological diversity in snakes seems to result from evolutionary explosions triggered by ecological opportunity,” Grundler adds. “We find a major burst of snake diet diversification after the dinosaur extinction, and we also find that, when snakes arrive in new places, they often undergo similar bursts of dietary diversification.”