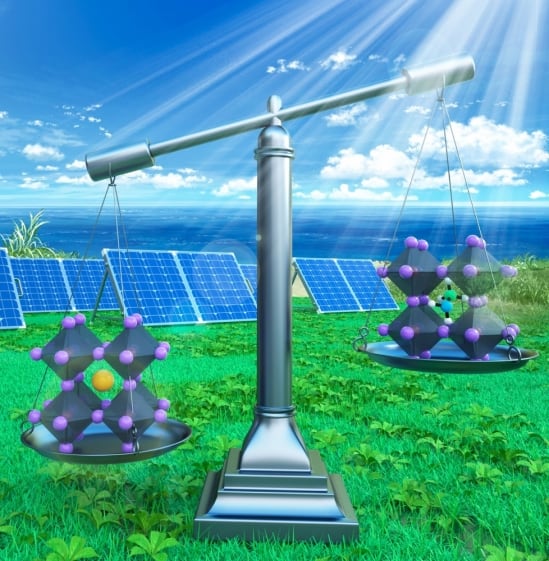 Hybrid organic-inorganic perovskites have already demonstrated very high photovoltaic efficiencies of greater than 25%. The prevailing wisdom in the field is that the organic (carbon- and hydrogen-containing) molecules in the material are crucial to achieving this impressive performance because they are believed to suppress defect-assisted carrier recombination.

New research in the UC Santa Barbara materials department has shown not only that this assumption is incorrect, but also that all-inorganic materials have the potential for outperforming hybrid perovskites. The findings are published in the article “All-inorganic halide perovskites as candidates for efficient solar cells(link is external),” which appears on the cover of the October 20 issue of the journal Cell Reports Physical Science.

“To compare the materials, we performed comprehensive simulations of the recombination mechanisms,” explained Xie Zhang, lead researcher on the study. “When light shines on a solar-cell material, the photo-generated carriers generate a current; recombination at defects destroys some of those carriers and hence lowers the efficiency. Defects thus act as efficiency killers.”

To compare inorganic and hybrid perovskites, the researchers studied two prototype materials. Both materials contain lead and iodine atoms, but in one material the crystal structure is completed by the inorganic element cesium, while in the other, the organic methylammonium molecule is present.

Sorting out these processes experimentally is exceedingly difficult, but state-of-the-art quantum-mechanical calculations can accurately predict the recombination rates, thanks to new methodology that was developed in the group of UCSB materials professor Chris Van de Walle(link is external), who credited Mark Turiansky, a senior graduate student in the group, with helping to write the code to calculate the recombination rates.

“Our methods are very powerful for determining which defects cause carrier loss,” Turiansky said. “It is exciting to see the approach applied to one of the critical issues of our time, namely the efficient generation of renewable energy.”

Running the simulations showed that defects common to both materials give rise to comparable (and relatively benign) levels of recombination. However, the organic molecule in the hybrid perovskite can break up; when loss of hydrogen atoms occurs, the resulting “vacancies” strongly decrease efficiency. The presence of the molecule is thus a detriment, rather than an asset, to the overall efficiency of the material.

Why, then, has this not been noticed experimentally? Mainly because it is more difficult to grow high-quality layers of the all-inorganic materials. They have a tendency to adopt other crystal structures, and promoting the formation of the desired structure requires greater experimental effort. Recent research has shown, however, that achieving the preferred structure is definitely feasible. Still, the difficulty explains why the all-inorganic perovskites have not received as much attention to date.

“We hope that our findings about the expected efficiency will stimulate more activities directed at producing inorganic perovskites,” concluded Van de Walle.

Funding for this research was provided by the Department of Energy Office of Science, Office of Basic Energy Sciences; the computations were performed at the National Energy Research Scientific Computing Center.