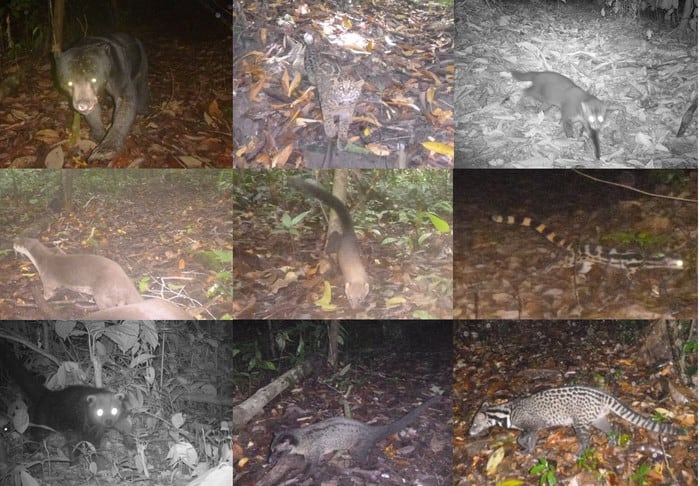 Just as humans may leave their home five minutes early to avoid a talkative neighbor or depart work late to avoid a rude coworker, carnivorous mammals may go out of their way to avoid other species. But they’re not trying to navigate awkward social interactions; rather, they are negotiating space and resources for survival.

Researchers monitored this temporal niche partitioning intermittently over six years with 73 infrared trigger sensor cameras installed at three sites in the Malaysian state of Sabah on Borneo, the third largest island in the world. The international collaboration published their findings, and what they might mean for the mechanism of coexistence between competing mammals, on Oct. 6 in Scientific Reports.

“Approximately 20% of the world’s mammal species face the risk of extinction, mainly due to threats such as habitat loss and overexploitation,” said first author Miyabi Nakabayashi, assistant professor in the Graduate School of Advanced Science and Engineering at Hiroshima University. “The status of mammals in the Indomalayan realm — one of Earth’s eight biogeographic regions, covering most of South and Southeast Asia — is among the world’s worst.”

One of the major roadblocks to effective and realistic solutions to lower the rate of endangered species is the scarcity of basic ecological information on mammals in the Indomalayan region, according to Nakabayashi.

“Information regarding temporal activity patterns of animals is crucial to assess responses to anthropogenic disturbances and to allow the implementation of proper conservation measures,” Nakabayashi said. “Camera trapping is one of the most useful techniques to study cryptic and rare animals.”

The researchers collected 37,379 photos over a total of about three active years. Although the first cameras were installed in 2010 and the last ones were removed in 2016, there were significant periods of bad weather or logistical issues — such as nesting insects — that rendered the cameras inoperable for long stretches of time.

In the dataset, the researchers identified nine distinct carnivore species with sample sizes larger than 10 and categorized their activity patterns by time of day. Of the species, six were active at night, two were active during the day and one was active regardless of time.

Some of the more closely related animals demonstrated a clear temporal segregation, including two wild cats, one of whom was nocturnal while the other preferred the day. However, the researchers also found that three species of civets were all active at night, which might be due to limited competition over resources because all three species eat a variety of food items, Nakabayashi said.

The researchers also found that tourism may have an impact on mammal behaviors. Tourism activities — mainly non-lethal ecotourism events — were conducted at all study sites during the study period. Only one site, however, hosted nocturnal tourism activities. Common palm civets at the other two sites had two clear peaks of temporal activity at night, but the same species at the site with nocturnal tourism had unclear and delayed temporal movement.

“The potential benefits of ecotourism may include reduced threats to wildlife ,” Nakabayashi said, noting that community-based ecotourism can bring significant benefits such as alternative income that incentivizes local communities and policy makers to protect the species in areas of interest. “But our results indicate that the temporal activity pattern of a species might be directly affected by tourism activity. The effect of tourism on animal behavior should be evaluated, even though it is non-lethal ecotourism.”

The researchers also recommended a two- to three-year-long study with at least 10 cameras to gather more data on the activities of the carnivores.

“Current information is too limited and sporadic to understand basic behaviors of mammals, which may affect the progress in evaluating and improving the threatened status,” Nakabayashi said. “We should accumulate more information on rare species to determine their basic ecology and to reassess whether current conservation management strategies are appropriate.”