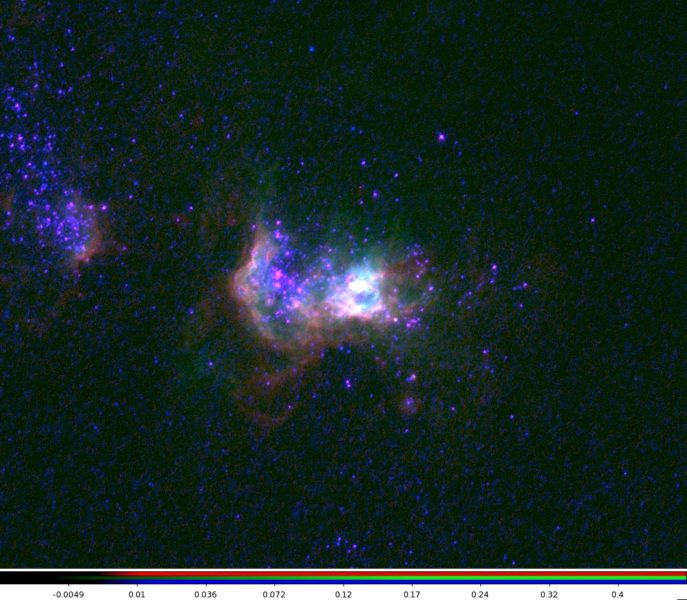 This image zooms in on the Mrk 71 region in the galaxy NGC 2366. The red, blue and green colors reflect the emission of oxygen and helium ions. The observations were made from the Hubble Space Telescope. Image credit: Sally Oey

When astronomers observe superwinds traveling at extremely high speeds from super star clusters, or “starbursts,” they previously assumed the winds were driven by supernovae, the explosions of stars.

This was the case for a starburst called Mrk 71 in a nearby galaxy. Astronomers had observed incredibly fast superwinds—traveling at about 1% of the speed of light—emanating from the cluster, and classic reasoning suggested the blasts from many supernovae drive the gas to such a high rate of speed.

But University of Michigan astronomers think supernovae aren’t the reason: the cluster is too young to have supernovae. They suspect a different mechanism is behind the superwind.

By studying the wind and starburst properties, the astronomers established that ultraviolet radiation from the compact starburst itself drove the superwind. Their findings, published in the journal Astrophysical Journal Letters, may help explain one chapter of the universe’s beginnings.

Just after the Big Bang, the universe was very dense and opaque, says lead author and graduate student Lena Komarova. The universe was so densely packed with particles, no light could pass through them.

“But when the first stars formed in the first galaxies, they produced lots of ultraviolet light. And this essentially evaporates the gas in the universe,” Komarova said. “It’s a process similar to when you have a fog in the morning that you can’t see through—but then the sunshine comes and hits the fog, it starts breaking up into smaller droplets, and you start seeing the light pass.”

In this analogy, neutral hydrogen atoms, which make up 92% of the cosmos, are the “fog” in the universe. But as light started shining out from the first stars forming in the universe, ultraviolet light from these stars began breaking up the hydrogen particles.

“The universe essentially becomes transparent and this happens at so-called cosmic dawn when the first stars appear,” Komarova said. “And so that’s what we’re trying to figure out: How do you get this UV light that’s energetic enough to evaporate the universe, to get out of the galaxies, without it all being absorbed by hydrogen?”

Komarova and Sally Oey, U-M professor of astronomy and senior author of the paper, think the answer lies in the superwinds that they found are generated by the radiation of these compact starburst galaxies. The radiation—ultraviolet light—”evaporates” hydrogen atoms, which are composed of a single proton and a single electron, by stripping off the electrons, ionizing them.

“Only UV light is capable of doing this, because the light has to be above a certain threshold energy,” Oey said. “Once the hydrogen is ionized, it becomes transparent because it can’t capture more UV photons.”

The U-M astronomers came up with the hypothesis of a radiation-driven wind to explain Mrk 71, a starburst region within the galaxy NGC 2366. By examining the spectrum of this region, Komarova and Oey were able to study the gas velocity structure, and found a smooth wind that originated at the brightest Mrk 71 super star cluster.

“We found that even if you had supernovae, there still wouldn’t be enough energy to accelerate the gas to the speeds that we observe,” Komarova said. “We compared the force of stellar light on the gas to the force of gravity, and we found that the radiation is much stronger than gravity—so it can, in fact, push the gas out without gravity bringing it back in. This is what we call a radiation-driven wind.”

The acceleration itself happens when intense light irradiates dense blobs of hydrogen gas from one direction, pushing the gas along, similar to how exploding gas forces a bullet out of a gun. The blobs must be too dense to be evaporated by the ultraviolet radiation. But the light also escapes through spaces between the dense blobs of hydrogen, and blasts blobs farther out from the star cluster.

“The reason why this is linked to the very high velocities is that in order for the blobs to get accelerated to such high speeds, they need to be constantly trapping these UV rays, even at large distances from the star cluster,” Oey said.

What the researchers then propose is this process clears pathways for ultraviolet light to pass between clumps of hydrogen gas.

“So, that UV light can in fact leave its cluster where it was born and go out into the rest of the universe to evaporate it,” Komarova said. “This is putting in another piece of the puzzle of evaporation of the universe and provides a specific physical mechanism of how you do it.”

The researchers drew their conclusion using the Hubble Space Telescope and archive data gathered at the Gemini-North Observatory in Hawaii.