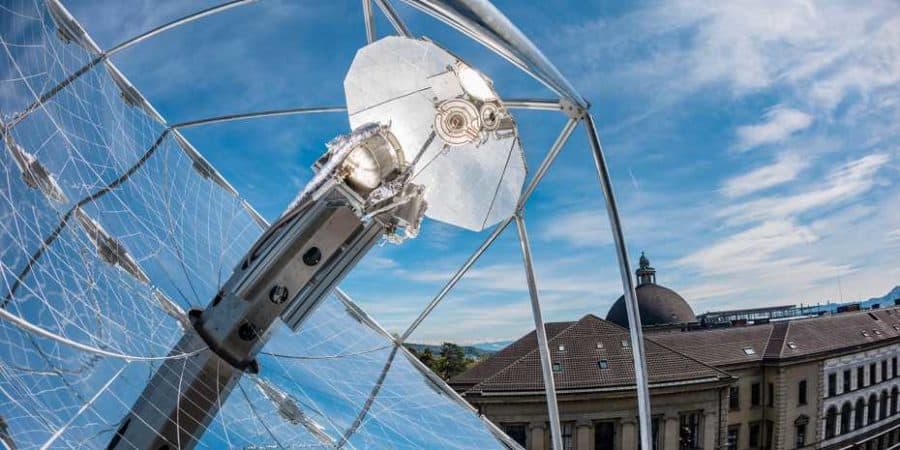 The sun-​tracking parabolic reflector delivers concentrated sunlight to a solar reactor (seen via the secondary reflector) which converts water and CO2 extracted from the air into a syngas mixture, which in turn is further processed into drop-​in fuels such as kerosene (Photograph: ETH Zurich).

Researchers at ETH Zurich have developed the process technology that can produce carbon-​neutral transportation fuels from sunlight and air. Now, in a Nature publication, they demonstrate the stable and reliable operation of the solar mini-​refinery under real on-​sun conditions. And they show a way to introduce solar fuels to the market without additional carbon taxes.

For the past two years, researchers led by Aldo Steinfeld, Professor of Renewable Energy Carriers at ETH Zurich, have been operating a solar mini-​refinery on the roof of the Machine Laboratory in the centre of Zurich. This unique system can produce liquid transportation fuels, such as methanol or kerosene, from sunlight and air in a multi-​stage thermochemical process.

In an interview, project architect Steinfeld and study co-​author Anthony Patt, a professor in ETH’s Department of Environmental Systems Science, explain what the experiments revealed, where optimisation is needed and how solar kerosene can succeed in entering the market.

The solar mini-​refinery on the roof of an ETH building has now been in operation for two years. How would you sum up this work?
Aldo Steinfeld: We have successfully demonstrated the technical viability of the entire thermochemical process chain for converting sunlight and ambient air into drop-​in transportation fuels. The overall integrated system achieves stable operation under real conditions of intermittent solar radiation and serves as a unique platform for further research and development.

In the title of your paper in Nature you refer to “drop-​in fuels”. What do you mean by that?
Aldo Steinfeld: Drop-​in fuels are synthetic alternatives for petroleum-​derived liquid hydrocarbon fuels such as kerosene and gasoline, which are fully compatible with the existing infrastructures for storage, distribution, and utilisation of transportation fuels. These synthetic fuels can help in particular to make long-​haul aviation sustainable.

Are these carbon-​neutral fuels?
Aldo Steinfeld: Yes, they are carbon neutral because solar energy is used for their production and because they release only as much CO2 during their combustion as was previously extracted from the air for their production. The solar fuel production chain’s life-​cycle assessment indicates 80 percent avoidance of greenhouse gas emissions with respect to fossil jet fuel and approaching 100 percent, or zero emissions, when construction materials (e.g. steel, glass) are manufactured using renewable energy.

A refinery that produces fuels from sunlight and air…it sounds like science fiction. How does it work?
Aldo Steinfeld: This is no science fiction; it is based on pure thermodynamics. The solar refinery consists of three thermochemical conversion units integrated in series: First, the direct air capture unit, which co-​extracts CO2 and H2O directly from ambient air. Second, the solar redox unit, which converts CO2 and H2O into a specific mixture of CO and H2 so-​called syngas. And third, the gas-​to-liquid synthesis unit, which finally converts the syngas into liquid hydrocarbons.

How was the yield of syngas / methanol?
Aldo Steinfeld: Our solar mini-​refinery is indeed a “mini” system for research purposes. And although we produced relatively small quantities of fuel, we did it under real field conditions with the not-​so-optimal solar irradiation of Zurich. For example, during a representative day run, the amount of syngas produced is about 100 standard litres, which can be processed into about half a decilitre of pure methanol. Several components of the production chain are not yet optimised. Optimisation is the next phase.

What went well, and what was not so optimal?
Aldo Steinfeld: What went exceptionally well is that we obtained total selectivity for the splitting of H2O to H2 and ½ O2, and of CO2 to CO and ½ O2, that is, no undesired by-​products of the thermochemical reactions. Further, and crucial to process integration, we were able to tailor the syngas composition for either methanol or kerosene synthesis. However, the energy efficiency is still too low. To date, the highest efficiency value that we measured for the solar reactor is 5.6 percent. Although this value is a world record for solar thermochemical splitting, it is not good enough. Substantial process optimisation is still required.

How can the system be further improved to increase efficiency?
Aldo Steinfeld: Heat recovery between the redox steps of the thermochemical cycle is essential because it can boost the efficiency of the solar reactor to over 20 percent. Furthermore, there is room for optimisation of the redox material structure, for example by means of 3D-​printed hierarchically ordered structures for improved heat and mass transfer. We are investing major efforts in both directions, and I’m optimistic that we will soon be able to report a new record value of energy efficiency.

For the chemical process, CO2 and H2O must first be extracted from the air and fed into the system. How much energy must be invested for this?
Aldo Steinfeld: The specific energy requirements per mole CO2 captured are about 15 kJ of mechanical work for vacuum pumping and 500–600 kJ of heat at 95°C depending on the air relative humidity. In principle, we can use waste heat to drive the direct air capture unit. But a huge quantity of high-​temperature process heat is needed for splitting the H2O and CO2, and this is supplied by concentrated solar energy.

For fuels, we would need to impose only a small additional cost on flying, thanks to the current market dominance of fossil fuels, in order to finance investments in renewable fuel production.Anthony Patt

Anthony Patt, as a co-​author on the study, you examined how solar fuels could enter the market and become competitive. What sorts of policies would it take to help make this possible?
Anthony Patt: Our analysis of policy instruments shows a need for technology support similar to what has existed for solar and wind energy. Both of these used to cost roughly ten times as much to build and operate as fossil generators, back when governments first started to support them. The current price ratio for solar kerosene compared to fossil is of the same order. A comparison with other renewable energy technologies shows that with a similar support mechanism, it ought to be possible to bring the cost of solar kerosene down to the current cost of fossil aviation fuel.

What are the most important barriers?
Anthony Patt: The hardest part is overcoming the high initial price barrier. Carbon taxes are not likely to be effective. If we were to tax fossil aviation fuel to the point where its cost to airlines was the same as solar fuels, which is what would be needed, it would mean making it ten times more expensive. Nobody would want to pay this additional cost for flying, and politicians would be unwilling to impose this burden on people. With solar and wind power, however, other policy instruments fit the context much better. They imposed a small additional cost on the total electricity consumed, and used this revenue to fund the cost that wind and solar added to the system. Similarly for fuels, we would need to impose only a small additional cost on flying, thanks to the current market dominance of fossil fuels, in order to finance investments in renewable fuel production. This would certainly help the solar reactor and solar fuels to take hold in the market.

In your opinion, what would be the ideal policy instrument to help solar fuels in the market?
Anthony Patt: The instrument most suited to the fuels market would be a quota system. This would function as follows: airlines and airports would be required to have a minimum share of renewable fuels in the total volume of fuel that they put in their aircraft. This would start out small, e.g. such as 1 or 2 percent. It would raise the total fuel costs, but only minimally; the initially small quota would add only a few Swiss francs to the cost of a typical European flight. The quota would rise each year, eventually towards 100 percent, meaning only solar fuels would be burned. The rising quota would lead to investment, and that in turn to falling costs, just as we observed with wind and solar. By the time solar fuels reach 10–15 percent of the fuel volume, we ought to see the costs for solar fuels nearing those of fossil kerosene. It is a strategy that is politically feasible and straightforward to implement.

What locations would be suitable for large production facilities?
Anthony Patt: A solar reactor needs direct sunlight, with no clouds in the way. It makes sense to build them in arid environments, such as those in South Spain and North Africa, the Arabian Peninsula, Australia, in the southwest of the United States, in the Gobi desert of China, or in the Atacama desert of Chile. The process chain does condense water from the air as one input, yet even desert air is moist enough to supply the needed quantities. Finally, desert land is relatively inexpensive, without competing uses. Solar fuels would be a global commodity similar to fossil fuels today, and indeed would rely on the same basic infrastructure for shipping and delivery.

Aldo Steinfeld: Suitable locations are regions for which the annual direct normal solar radiation is higher than 2000 kWh/m2 per year. In contrast to biofuels, which are limited by resource provision, global jet fuel demand can be met by utilizing less than one percent of the worldwide arid land, which does not compete with food production. To put this in context, 2019 global aviation kerosene consumption was 414 billion liters; the total land footprint of all solar plants required to fully satisfy global demand would be about 45,000 km2, equivalent to 0.5 percent of the area of the Sahara Desert.