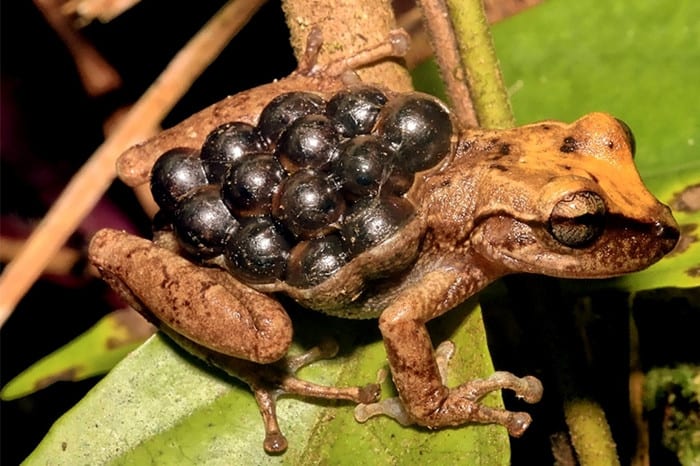 A Brazilian study described in an article published in the journal Salamandra evidences the versatility of amphibians in terms of reproductive modes: their eggs and larvae can develop in at least 74 different ways.

Signed by scientists at the University of Campinas (UNICAMP) and São Paulo State University (UNESP) in Brazil, the article compiles data available in the specialized literature and collected by the authors over decades of research. In addition, it proposes a novel system for classifying the reproductive modes of the entire class of animals comprising anurans (frogs and toads), salamanders, newts, and caecilians.

“The previous classification comprised only anuran amphibians and pointed to the existence of 39 variations. This is already an impressive number, and far larger than for other vertebrates, such as reptiles, mammals and birds, yet it still doesn’t reflect the huge reproductive diversity of amphibians in its entirety,” said Luís Felipe Toledo, a professor at UNICAMP’s Institute of Biology (IB) and principal investigator for the study. The first author is Carlos Henrique Luz Nunes-de-Almeida.

The researchers analyzed the reproductive strategies of 2,171 species of amphibians, including 80% of the families of these animals known to exist worldwide. The anurans are the most diverse subgroup, with 7,315 known species and 2,012 represented in the study. They were found to have 71 reproductive modes, of which 56 were exclusive.

Besides the diversity of anurans, their moving between terrestrial and aquatic environments leads to the development of a vast array of reproductive strategies. In several species of Pipidae, for example, the females carry their eggs on their back in water, and offspring hatch ready for life in an aquatic environment, skipping the tadpole stage (direct development).

In the case of egg-brooding or marsupial frogs (genus Fritziana), the females, which are tree dwellers, also carry eggs on their back, depositing them in water pooled in bromeliads or bamboo stalks. There the eggs hatch and the larvae finish developing in these aquatic environments.

Hylodes japi, a torrent frog endemic to Serra do Japi in the state of São Paulo, lays its eggs in an underwater chamber it builds on the bed of small streams. Only fish had previously been seen to do anything similar.

Some species nest in bromeliads, carnivorous plants, and even Brazil nut fruit capsules on the floor of the Amazon Rainforest. Examples include Scinax alcatraz, Microhyla borneensis (a narrow-mouthed frog found in Borneo), and Rhinella castaneotica (the Para toad) respectively (more at: agencia.fapesp.br/24106).

“The study has impacts in several areas, such as natural history and animal behavior, of course, but also our understanding of the evolution of amphibians. It will contribute to conservation and ecology, since it shows how amphibian species may be dependent on certain habitats and even species, such as plants. A pond drying up or extinction of a bromeliad, for example, can mean the end of some toad species,” said Célio Fernando Baptista Haddad, a professor at UNESP’s Institute of Biosciences in Rio Claro and the third co-author of the article. Haddad produced the previous classification of anuran reproductive modes, published in 2005.

Some species adapt better by developing several reproductive strategies. For example, Physalaemus spiniger, a frog endemic to Brazil, has at least three reproductive modes. Depending on local conditions, it spawns in ponds, on the moist forest floor, or in bromeliads.

This plasticity should be an advantage in adapting to climate change. If ponds dry up or bromeliads disappear, the species may be able to survive by switching modes. Most species, however, only use one of the 74 modes and are considered at risk of extinction due to environmental and climate change (more at: agencia.fapesp.br/23336).

Eggs may develop in the body of a parent or may be deposited in aquatic environments, such as rivers, streams, ponds, lakes, and plant water cups, or terrestrial environments, such as rocks, hillsides, and even termite mounds. The system also considers the existence of parental feeding. The caecilians Boulengerula taitanus and Siphonops annulatus, for example, nourish their offspring with their own skin.

“Reproductive mode diversity results from selective pressures such as competition and predation,” Toledo said. “A pond is a highly dangerous environment full of predators such as fish, dragonfly larvae, and other carnivorous tadpoles. When a species becomes able to spawn outside the pond, on an overhanging leaf, for example, eggs can escape all these aquatic predators, and tadpoles fall into the water when ready.”

Some species skip the larval stage and never leave dry land during their life cycle. The superfamily Brachycephaloidea comprises more than 1,100 species, including the pumpkin toadlet Brachycephalus rotenbergae, all of them direct developers. The offspring hatch as miniature adults, ready to live on the forest floor.

In light of this diversity and their constant discoveries, the researchers are aware the study’s results are not definitive. On the contrary, it opens the door for descriptions of more reproductive modes not only in amphibians but also other vertebrates. The idea is for the system to include fish, reptiles, mammals and birds, and for new groups and reproductive modes to be added in future.