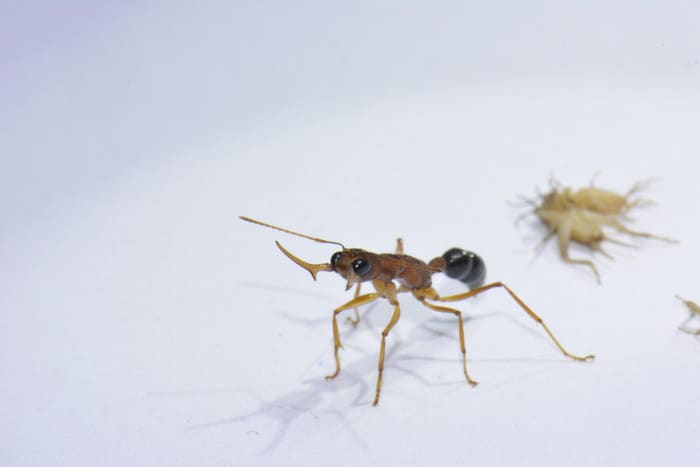 Depending on the outcome of social conflicts, ants of the species Harpegnathos saltator do something unusual: they can switch from a worker to a queen-like status known as gamergate. Now, researchers reporting in the journal Cell on November 4th have made the surprising discovery that a single protein, called Kr-h1 (Krüppel homolog 1), responds to socially regulated hormones to orchestrate this complex social transition.

“Animal brains are plastic; that is, they can change their structure and function in response to the environment,” says Roberto Bonasio of the University of Pennsylvania Perelman School of Medicine. “This process, which also takes place in human brains—think about the changes in behavior during adolescence—is crucial to survival, but the molecular mechanisms that control it are not fully understood. We determined that, in ants, Kr-h1 curbs brains’ plasticity by preventing inappropriate gene activation.”

In an ant colony, workers maintain the colony by finding food and fighting invaders, whereas the queen’s main task is to lay eggs. And, yet, it is the same genetic instructions that give rise to these very different social roles and behaviors. By studying ants, Bonasio and colleagues, including Shelley Berger, also at the University of Pennsylvania, wanted to understand how turning certain genes “on” or “off” affects brain function and behavior. Because Harpegnathos adults can switch from a worker to a gamergate, they were perfect for such studies.

So that they could study the underlying molecular events that cause such a switch, the research team, led by co-first authors Janko Gospocic and Karl Glastad, developed a method for isolating neurons from the ants and keeping them alive in plastic dishes in the lab. This allowed the team to explore how the cells responded to changes in their environment, including hormone levels.

These studies further identify that two hormones, juvenile hormone and ecdysone, which are present at different levels in the bodies of workers and gamergates, produced distinct patterns of gene activation in the brains of the two castes. The biggest surprise was that both hormones influenced the cells by activating a single protein, Kr-h1.

“This protein regulates different genes in workers and gamergates and prevents the ants from performing ‘socially inappropriate’ behaviors,” Berger says. “That is to say, Kr-h1 is required to maintain the boundaries between social castes and to ensure that workers continue to work while gamergates continue to act like queens.”

“We had not anticipated that the same protein could silence different genes in the brains of different castes and, as a consequence, suppress worker behavior in gamergates and gamergate behavior in workers,” Bonasio adds. “We thought that these jobs would be assigned to two or more different factors, each of them only present in one or the other brain.”

The findings reveal important roles for socially regulated hormones and gene regulation in the ability of animal brains to switch from one genetic mode and social caste to another. “The key message is that, at least in ants, multiple behavioral patterns are simultaneously specified in the genome and that gene regulation can have a great impact on which behavior that organism carries out,” Berger says. “In other words, the parts of both Dr. Jekyll and Mr. Hyde are already written into the genome; everyone can play either role, depending on which gene switches are turned on or off.”

The researchers think the implications may go much farther than understanding behavioral plasticity in ants and other insects. “It is tempting to speculate that related proteins might have comparable functions in more complex brains, including our own,” says Bonasio. “Discovering these proteins might allow us to one day restore plasticity to brains that have lost it, for example aging brains.”

The discovery that a single factor can suppress different sets of genes and behaviors in different brains raises important questions about how the dual function of this protein and others like it might be regulated. In future studies, the researchers plan to explore the role of Kr-h1 in other organisms. They say they also want to explore how the environment impacts gene regulation at the epigenetic level—through the presence or absence of certain chemical marks on DNA—and how this in turn impacts brain plasticity and behavior.

This work was supported by the National Institutes of Health, the Searle Scholars Program, and the 2020 Max Planck-Humboldt Research Award.