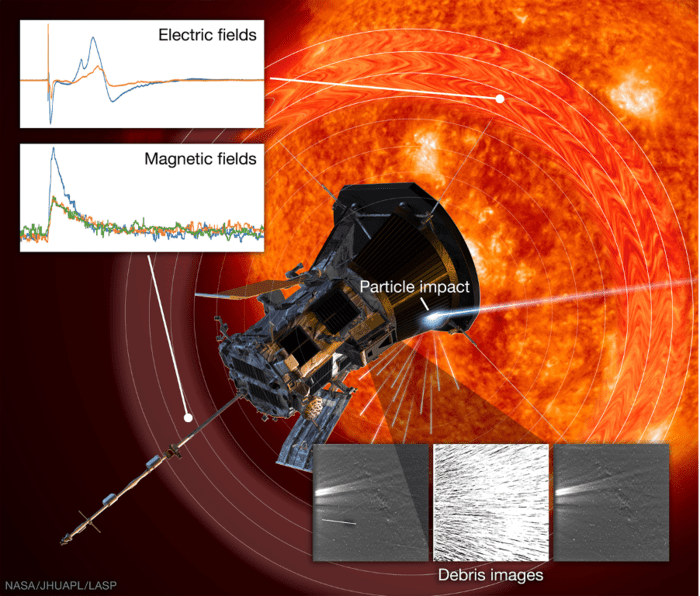 The Parker Solar Probe spacecraft, NASA’s newest and most ambitious effort to study the sun, has broken a lot of records: it has gotten closer to the sun than any other spacecraft to date, its instruments have operated at the hottest temperatures, and the probe is the fastest human-made object ever. But those records come at a cost: The spacecraft is moving so fast that running into even a tiny grain of dust can lead to serious damage.

New research by scientists at the Laboratory for Atmospheric and Space Physics (LASP) at the University of Colorado, Boulder and the Johns Hopkins University Applied Physics Laboratory (APL) examines collisions between the Parker Solar Probe spacecraft and dust. Led by David Malaspina, a researcher at LASP, and Assistant Professor in the Astrophysical and Planetary Sciences Department at the University of Colorado, the team drew on electromagnetic and optical observations from Parker Solar Probe to produce the most complete picture yet of how hypervelocity dust impacts may damage a spacecraft and disturb its operations.

Traversing near-sun space at up to 180 kilometers per second (about 400,000 miles per hour), Parker Solar Probe plows through the densest region of the zodiacal cloud. The zodiacal cloud is a thick, pancake-shaped dust cloud that extends throughout the solar system and is made up of tiny dust grains shed from asteroids and comets. As Parker Solar Probe barrels through this region, thousands of tiny (about 2 to 20 microns in diameter, or less than a quarter of the width of a human hair) dust grains strike the spacecraft at hypervelocity (faster than 6,700 miles per hour). Upon impact, the material that makes up the dust grains and the spacecraft surface is heated so much that it first vaporizes, then ionizes. Ionization is a process where atoms in the vaporized material are separated into their constituent ions and electrons, producing a state of matter called plasma. The rapid vaporization and ionization creates a plasma explosion lasting less than one thousandth of a second. The largest of these impacts also generate clouds of debris that slowly expand away from the spacecraft.

In the new study, Malaspina and colleagues used antennas and magnetic field sensors to measure disturbances to the electromagnetic environment around the spacecraft produced by dust impact plasma explosions (Figure 1). The findings could lead to new insights into space weather around the sun. For example, these measurements allowed the team to study how these plasma explosions interacted with the solar wind, or the stream of ions and electrons that the sun generates on a constant basis.

“With these measurements, we can watch the plasma created by these dust impacts be swept away by the flow of the solar wind.” Malaspina said. He added that learning how this “pick up” process works on a small scale may help scientists better understand how larger plasma regions, such as those in the upper atmospheres of Venus and Mars, are swept away by the solar wind.

The findings also have major implications for the safety of Parker Solar Probe and spacecraft that will come after it.

The team observed how metallic flakes and paint chips knocked loose during collisions with dust drifted and tumbled near the spacecraft. Those pieces of debris created streaks in the images taken by navigational and scientific cameras on Parker Solar Probe.

“Many image streaks look radial, originating near the heat shield,” said study co-author Kaushik Iyer of APL, referring to the large shield that protects Parker Solar Probe from the intense heat near the sun. The study also reports that some debris scattered sunlight into the Parker Solar Probe navigation cameras, temporarily preventing the spacecraft from determining how it was oriented in space. That can be a dangerous prospect for a spacecraft that relies on precise pointing of its heat shield to survive.

Parker Solar Probe was launched in 2018 and has completed nine full orbits of the sun. Before its prime mission ends in 2025, it will complete another 15 orbits.

As Parker Solar Probe continues its journey of exploration near the sun, it can now add one more record to its long list: most sand-blasted spacecraft.

The results of this study will be presented on November 11, 2021, at the 63rd Annual Meeting of the APS Division of Plasma Physics in Pittsburgh, PA.

This work was supported by NASA (NNN06AA01C).