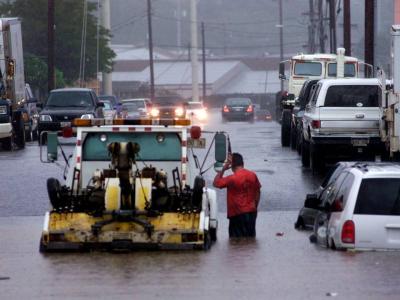 The town of Tangier on Tangier Island, Chesapeake Bay, has lost 62% of its original habitable upland area since 1967, a new study has found. It will see further decline within the next 15-30 years, leaving hundreds of people without homes and income. The researchers estimate that fully protecting and restoring the town would cost roughly between $250m and $350m. The case of Tangier is a prime example of the consequences of continued sea level rise and human displacement due to the climate crisis.

The effects of the climate crisis can be seen all over the world. The last seven years were the warmest on record, and research is showing that future projections of climate crisis related changes, such as extreme weather events, extreme droughts, and global sea level rise, are more severe than previously thought.

Continued sea level rise is one of the most serious consequences of the climate crisis, according to the latest IPCC Assessment Report. Sea level rise leads to loss of habitat for plants and animals, more severe hurricanes and typhoons, and loss of habitable land for humans. Ultimately, sea level rise will force people to migrate to higher ground, creating climate change refugees.

A prominent example of the consequences of human driven sea level rise is the case of the Tangier in Tangier Island, Chesapeake Bay, US. Tangier Island is one of the last remaining inhabited islands in Chesapeake Bay and is primarily a fishing community. The town’s population has shrunk from more than 1,100 inhabitants in the early 1900s, to 436 in 2020 and consists of three upland ridges: Canton, Main, and West.

A new study published in Frontiers in Climate found that Tangier has lost a significant portion of its original habitable upland area and is set to lose all habitable land within the next 15-30 years.

“Our study shows that sea level rise has already had a severe impact on a small town in the US. Soon, these Americans, inhabitants of the last isolated fishing community in Virginia, will become climate change refugees, forced to relocate,” said lead author David Schulte, College of William and Mary, US.

A 2015 paper by Schulte found that Tangier Island had lost 67% of its total landmass since 1850 due to a combination of relative sea level rise and coastal erosion. The publication of the paper was followed by misinformation, the researchers said, with claims that coastal erosion alone was responsible for Tangier’s land loss.

The current study is a follow up on the 2015 paper, to determine the impacts of sea level rise on Tangier, and to clarify the climate crisis related misinformation that followed the first study.

How much to move the whole town?

To determine the impacts of sea level rise on the town, the researchers analyzed local sea level rise data and compared upland to wetland conversion rate to the rate of population decline.

They found that, as of 2019, the town had lost 62% of its original habitable upland area since 1967. The results also showed that, if relative sea level rise were to continue as predicted, the year of full conversion to wetlands for each ridge is: 2033 (West Ridge), 2035 (Main Ridge), and 2050 (Canton Ridge).

“We noted that local sea level rise in the Chesapeake Bay region is higher than the global average, and that it is accelerating in a similar trend as the global mean rate. The rate of conversion of high ground to wetlands was generally an accelerating trend, just like the sea level rise that is driving it,” explained Schulte.

The authors estimate that fully protecting and restoring the town would cost roughly between $250m and $350m. Necessary actions included in this estimate are, for example, applying protective stone along the vulnerable shorelines of the island and raising the three ridges by three meters using dredged sand. Natural based solutions, such as oyster reefs, could cost an additional $100-$300,000 per hectare of reef.

When human exodus from the island becomes inevitable, the estimated cost of relocating a town of 436 inhabitants is between $100m and $200m.

A wake-up call for the world

The authors predict that the population of Tangier will reach zero by the year 2053, which parallels the upland to wetland conversion rate. Though the decline in population can’t only be attributed to sea level rise, a lot of the social issues the town faces, such as a lack of land for new commercial or residential use, are linked to it.

Eventually, the climate crisis will affect everyone. The majority of Americans live in coastal cities and Tangier Island is a warning for the effects and the economic cost of continued sea level rise.

“Our study shows that sea level rise impacts in the US are already severe in some areas, even forcing people to relocate, which most Americans do not realize is happening (mostly due to misinformation),” concluded Schulte.

“Our data and analysis suggest Tangier Island is almost out of time, just like many other coastal communities all over the world.”