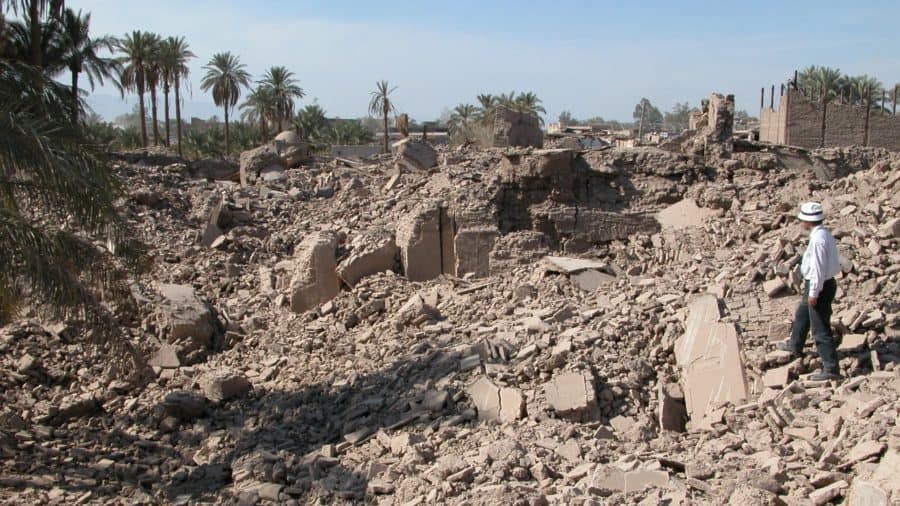 In 2009 in L’Aquila, a city about 60 miles northeast of Rome, a severe earthquake killed over 300 people and left 60,000 homeless. In 2011 six Italian scientists and a government official were put on trial for manslaughter, with the prosecution alleging they had not properly communicated the risk of such a major earthquake occurring. They were found guilty and each sentenced to six years in prison and a huge fine. Following international outrage, the convictions were overturned on appeal two years later.

“If you allow people to believe we can predict earthquakes, they won’t do anything to make their lives safer.”

Professor James Jackson has spent his career studying earthquakes. He can tell you how the Earth’s continents are deforming, on scales from single fault lines to vast continental areas. Using space-based techniques combined with geological investigations he can identify where earthquakes will happen, how big they’ll be, and how long the shaking will last. But what he can’t do is predict when they’re going to occur – nobody can.

“We took the scientists from L’Aquilla to other countries at risk of earthquakes, including Kazakhstan, for them to tell the local politicians: ‘if you allow the public to believe you can predict earthquakes, this is what will happen’. That had a real impact,” says Jackson, in the University’s Department of Earth Sciences.

In earthquake-prone developed countries like Japan and New Zealand, even severe earthquakes cause very few deaths – they are mainly stories of economic loss. The design of buildings in these countries is regulated to ensure they are as earthquake-proof as possible, in preparation for the unexpected.

But throughout much of the Mediterranean­–Middle East–Central Asia earthquake belt, buildings are of low quality and have not been managed through building codes in the same way. Towns and cities near active faults are experiencing rapid population growth and urban development. Earthquakes here will kill tens, or hundreds of thousands of people.

Realising this huge disparity led Jackson and his colleagues, Professor Keith Priestley and Dr Alex Copley in the University’s Department of Earth Sciences, to ask how they could use science to increase developing countries’ resilience to earthquake risk.

Together with Professor Philip England at the University of Oxford, the team had developed a long-term relationship with collaborators across the Mediterranean–Himalayan–Asian earthquake belt, many of whom advise their respective governments on earthquake hazard and risk. In 2012 they leveraged this relationship to establish ‘Earthquakes without Frontiers’ (EwF), a consortium jointly funded by the Natural Environment Research Council and the Economic and Social Research Council, to support physical and social scientists working to increase resilience to earthquakes in Asian countries.

Cambridge research has shown that seismic risk is higher in continental interiors, where the network of geological faults is much less well defined, than at plate boundaries. Devastating earthquakes such as those in Bam, Iran (2003; 30,000 deaths), and Muzzafarabad, Pakistan (2005; 75,000 deaths), invariably take place on faults that were either previously unknown, or whose threat had not been recognised, making hazard assessment and development planning impossible.

At its heart, EwF uses science to help developing countries be better prepared for earthquakes. In Tehran, for example, work by EwF identified a new fault line, subsequently named the Pardisan fault. This was a major step in evaluating the earthquake hazard to this city of over 10 million people.

In another of its focus regions in north-west India, EwF identified an area at the entrance to the Kashmir valley at risk of a major earthquake at some point in the future. The likely effects of that earthquake will be to block all the roads and completely cut off the Kashmir valley.

“We can’t say when it will happen, but when it inevitably does we can estimate how big it will be, where the shaking will be and how long it will last”

says Jackson, adding: “Long-term forecasting is a matter of understanding the local geology, what happened before, and how earthquakes work in that part of the world. Then there’s a lot you can do to prepare.”

A Nepalese EwF collaborator (centre) shows collaborators from India (left) and Iran (right) some particularly vulnerable buildings in central Kathmandu, Nepal – which were later destroyed in an earthquake in 2015.

Earthquakes in major cities today have a much bigger impact than in the past, in part because of their much bigger populations. In a two-year scientific study, EwF’s Nepalese partners forecasted the impacts of an earthquake in Kathmandu on public ‘lifelines’ including water supply, electricity, and phone networks, and created a picture book for the public showing the unfolding scenario day-by-day.

“Two years later the earthquake actually happened – and jeepers, you could just turn over the pages of the book and it was all accurate!” says Jackson. “That had a huge impact on the Chinese, who wanted us to do the same thing there.”

“Earthquakes without Frontiers was an experiment no-one had tried before”

says Jackson, adding: “We had the previous experience of working with people in all these different countries, and we wanted to see what happened if we tried to connect them all.”

What happened was that scientists in developing countries no longer felt that they were working alone. “In India, for example, we did a mixture of collaborative science, learning about the region to assess earthquake hazard and risk, and bringing in contacts from other developing countries in the EwF network to talk to Indian officials about contingency planning,” says Jackson. “That really helped the Indian scientists to be taken seriously and to influence those responsible for public safety.”

Across many countries, EwF’s collaborative work has shifted the focus away from short-term earthquake prediction towards increasing resilience. In Tehran, EwF’s work has helped their Iranian scientific partners to influence the Iranian government’s changes to planning policy, and revisions to its city development plan, to reduce the risk.

“Collaborations through EwF have provided the possibility of identifying…and studying the active hidden Pardisan fault within the capital city of Tehran, which was a major step in evaluating the earthquake hazard to Tehran,” – Geological Survey of Iran

EwF has led to improved earthquake hazard assessment in many other countries too. Empowered in-country scientists have led to improved public safety policy, and a shift in the political understanding of managing earthquake risk. New building codes have been developed, and many more been retrofitted, resulting in safer and more resilient buildings.

The results are saving lives. In a 2015 earthquake in Nepal, 300 schools retrofitted to increase earthquake resilience by the National Society of Earthquake Technology (NSET, a Nepalese non-profit organization) all survived unscathed. This is in stark comparison to the wider statistics: 98% of the nearly 9,000 deaths from this earthquake were caused by collapsing buildings.

EwF visited one of the sites of NSET’s schools retrofitting programme in Kirtipur, Nepal, before the earthquake in 2015.

A report presented by EwF’s Nepalese partners NSET on the impact of, and resilience to, the 2015 earthquake led the Nepalese government to develop a new building code to improve earthquake resilience. NSET were awarded a USD $10 million contract by USAID to rebuild over 50,000 residential properties and thousands of schools. The new buildings allow children to attend school without fear.

NSET attributed their success in securing and delivering construction contracts in Nepal, both before and after the earthquake, to their collaboration with EwF.

The research has also helped improve the safety of hydrocarbon exploration as a result of better assessment of seismic hazard and risk in the Caspian region, an area which has attracted more than $50 billion of investment but which is at extreme risk of earthquakes.

“A big part of the success of EwF was not us going to developing countries and telling them what to do, but finding ways to give local scientists more confidence and be taken more seriously by their own nationals,” says Jackson. “We’re helping to tell them the reality of what they’ll be up against, and empowering local scientists to speak to their officials.” He adds:

“You simply can’t do short-term earthquake prediction – it will never be possible, but in many countries, people seem to think we can. That kind of attitude kills people.”