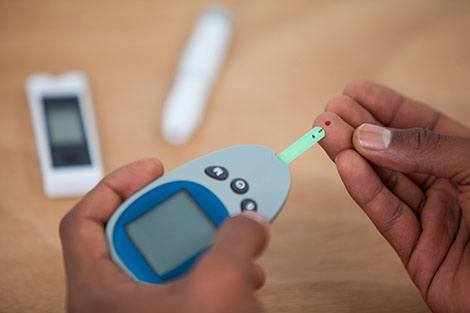 A new anti-diabetic compound derived from a garden flower has been approved by Health Canada for Phase 1 human trials. GlycoNet researcher Stephen Withers anticipates that the compound could be used to develop a treatment with fewer side effects than other options currently available to those with Type 2 diabetes.

“Our approach is to slow down the degradation of the starch component of your food, but not affect the simple sugars,” says Withers, lead researcher and professor at the University of British Columbia (UBC).

The natural compound called Montbretin A (MbA) works by inhibiting the enzyme alpha-amylase. When MbA inhibits the alpha-amylase enzyme, starch doesn’t break down immediately and instead travels down into the lower gut.

Normally, the alpha-amylase enzyme breaks down starch from foods such as rice and bread into complex sugars called oligosaccharides. Oligosaccharides are then further degraded by alpha-glucosidase enzymes in the gut wall, releasing glucose into the bloodstream, which causes blood sugar levels to spike in Type 2 diabetics.

Current drugs that target the same enzyme system usually inhibit the alpha-glucosidase enzyme, stopping the oligosaccharides or complex sugars from being broken down, and preventing the release of glucose. “The downside of these drugs is that the oligosaccharides that are shunted down provide ‘fast food’ for the gut bacteria further down, and these gut bacteria produce a lot of gas as a side product…so the patient tends to suffer from diarrhea and flatulence,” explains Withers. “As a consequence they do not tend to take the drug.”

Withers expects MbA could be a drug for controlling blood glucose levels with fewer side effects than existing drugs of this class, so that Type 2 diabetics will be more likely to take it. Since MbA prevents starch from being broken down into oligosaccharides, the full starch polymer will make its way into the lower gut. “The bacteria down there can degrade that, but we anticipate they will do so much more slowly,” says Withers.

From flower to treatment

Withers and UBC researcher Gary Brayer spent many years studying the alpha-amylase enzyme and first tried to develop a compound in the lab that could inhibit the enzyme, before turning their search to nature.

“We were lucky enough to get our hands on a library with a collection of extracts of different plants from around the world. We had 30,000 such extracts, and we were able to screen those extracts for potential inhibitors of the enzyme,” says Withers.

Withers selected the most promising extract from the montbretia (Crocosmia x crocosmiiflora) flower, and worked with UBC researcher Raymond Andersen to isolate and identify the active ingredient: MbA.

“In conjunction with Gary Brayer we figured out how it inhibits amylase, and in conjunction with John McNeill we did animal studies on diabetic rats and showed that it very nicely controlled blood sugar levels,” says Withers.

The Phase 1 clinical trial has been approved but it has been delayed due to COVID. The trial is set to start as soon as circumstances allow.

In anticipation that MbA will be successful in human trials, GlycoNet researcher and UBC professor Joerg Bohlmann, along with his postdoctoral fellow Sandra Irmisch (now a professor at Leiden University), have been tackling the problem of obtaining a secure supply of the compound on a large scale.

Supported by GlycoNet, Bohlmann and Irmisch have been studying how the plant makes the compound and are now working on a way to synthetically produce MbA—inserting the compound-producing genes from the montbretia plant into yeast to create a “factory.” Success at this approach will enable affordable, reliable production in a controlled lab environment, eliminating the risk of a shortage if the plant itself were to be affected by some disease and die off.

The overall project, from the fundamental science stages to pre-clinical trials to the human trial stage now, has taken approximately 30 years of research and extensive commitment to developing a better treatment for managing Type 2 diabetes.

“We’re excited and I’d have to say pretty confident that we’ll get through this phase of the clinical trial in fine shape,” says Withers. “MbA is very similar to a number of molecules that are in our diet, but of course you have to test it to be sure.”