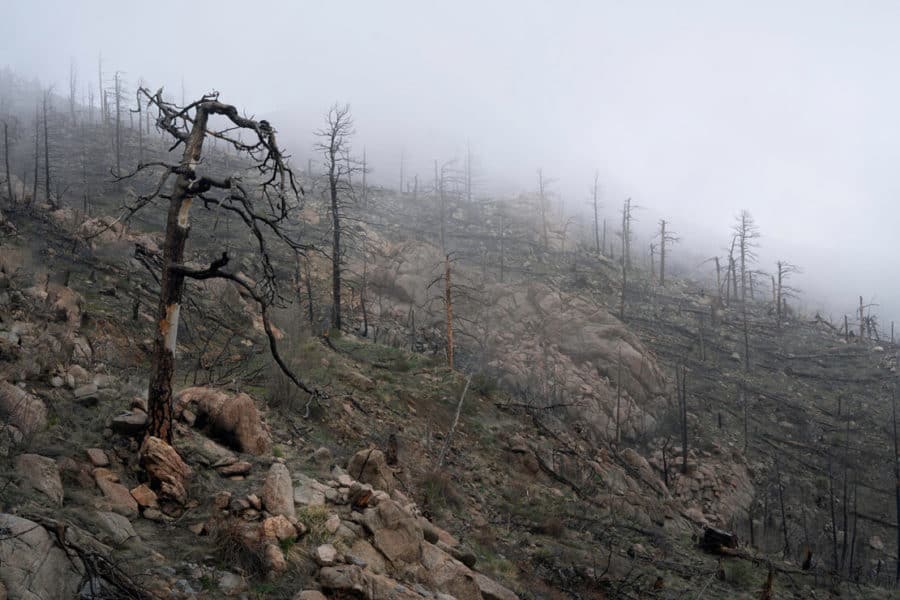 Refugees are on the move in forests across the western U.S. As climate conditions change, the ranges of tree species are shifting, especially toward cooler or wetter sites. A new Stanford analysis provides some of the first empirical evidence that wildfire is accelerating this process, likely by reducing competition from established species. The study, published Nov. 15 in Nature Communications, raises questions about how to manage land in an era of shifting ecosystems – a key issue as President Biden prepares to sign into law an infrastructure bill that allocates more than $5 billion for forest restoration and wildfire risk reduction.

“Complex, interdependent forces are shaping the future of our forests,” said study lead author Avery Hill, a graduate student in biology at Stanford’s School of Humanities & Sciences. “We leveraged an immense amount of ecological data in the hopes of contributing to a growing body of work aimed at managing these ecosystem transitions.”

As the climate changes, animal and plant species are shifting their ranges toward conditions suitable for their growth and reproduction. Past research has shown that plant ranges are shifting to higher, cooler elevations at an average rate of almost five feet per year. In many studies, these range shifts lag behind the rate of climate change, suggesting that some species may become stranded in unsuitable habitats. The factors that impact plant species’ ability to keep up with climate change are key to maintaining healthy populations of the dominant trees in western forests, yet have remained largely mysterious.

To better understand the distance, direction and rate at which tree ranges are shifting, Hill and study co-author Chris Field, the Perry L. McCarty Director of the Stanford Woods Institute for the Environment, looked at how the phenomenon is affected by wildfire, a potent and widespread driver of ecosystem structure and composition in the western United States.

Using U.S. Forest Service data collected from over 74,000 plots across nine Western states, the researchers identified tree species that are shifting their ranges toward cooler, wetter sites – an expected response to the recent warming and drying. Then, they compared the rate of these range shifts between places that were burned by wildfire and places that were not.

Of eight species that had seedlings growing in climates significantly different from mature trees of the same species, Hill and Field found strong evidence that two – Douglas fir and canyon live oak – had larger range shifts in areas that burned than in areas that did not.

Although the analysis did not reveal the mechanism for how wildfire accelerates range shifts for certain trees, the researchers hypothesized that burned areas with their open canopies and scorched understory present less competition from other plant species.

The findings demonstrate not only that fire can accelerate tree migration, but that some species may be slowing the range shifts of others through competition. This, in turn, raises questions about the impact of fire management on trees’ ability to keep up with climate change, and points to the importance of low-intensity prescribed and natural fires.

“This study highlights a natural mechanism that can help forests remain healthy, even in the face of small amounts of climate change,” said Field. “It also illustrates the way that ecosystem processes often have several layers of controls, a feature that emphasizes the value of detailed understanding for effective management.”

Field is also the Melvin and Joan Lane Professor for Interdisciplinary Environmental Studies, a professor of Earth system science and biology, and a senior fellow at the Precourt Institute for Energy.

The research was funded by the Gordon and Betty Moore Foundation.