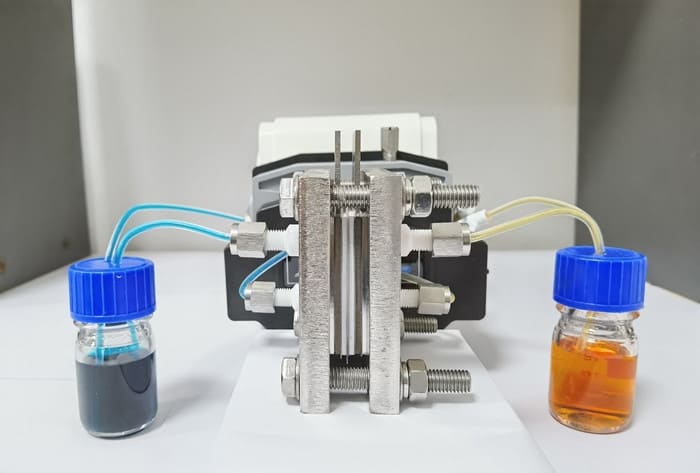 To produce a cost-effective redox flow battery, researchers based at the South China University of Technology have synthesized a molecular compound that serves as a low-cost electrolyte, enabling a stable flow battery that retains 99.98% capacity per cycle. They published their approach on August 14 in the Energy Material Advances.

Comprising two tanks of opposing liquid electrolytes, the battery pumps the positive and negative liquids along a membrane separator sandwiched between electrodes, facilitating ion exchanges to produce energy. Significant work has been dedicated to developing the negative electrolyte liquid, while the positive electrolyte liquid has received less attention, according to corresponding author Zhenxing Liang, professor in the Key Laboratory of Fuel Cell Technology of Guangdong Province, School of Chemistry and Chemical Engineering, South China University of Technology.

“Aqueous redox flow batteries can realize the stable electrical output for using unsteady solar and wind energy, and they have been recognized as a promising large-scale energy storage technology,” Liang said. “Electroactive organic merit of element abundance, low cost and flexible molecular control over the electrochemical features for both positive and negative electrolytes are regarded as key to developing next-generation redox flow batteries.”

Liang and his team focused on TEMPO, a chemical compound with easily reversed oxidation states and high potential for energy, a desired quality in positive electrolytes.

“However, TEMPO cannot be directly applied to aqueous redox flow batteries due to the high hydrophobicity of the molecular skeleton,” Liang said, explaining that TEMPO, left unmodified, will not dissolve in the liquid needed to facilitate the energy exchange in the flow batteries. “We developed a strategy to functionalize TEMPO with viologen, an organic compound that has highly reversible redox reactions, to improve TEMPO’s hydrophilicity.”

According to Liang, viologen is highly soluble in water, which increases TEMPO’s ability to dissolve in water. Viologen also chemically withdraws electrons from atomic partners, which elevates its potential to change its oxidative state. Viologen is also a salt, which endows TEMPO with what Liang calls “a decent conductivity” in an aqueous solution.

When the synthesized viologen-modified TEMPO was tested in a flow battery, the researchers found that the battery retained capacity of 99.98% per cycle, meaning the battery could hold nearly all its stored energy when not in active use.

“This work overcomes the disadvantages of TEMPO by viologen-functionalization and realizes its application in aqueous redox flow battery,” Liang said. “The molecular design concept provides a strategy for novel organic electroactive materials and lays a foundation for the application of aqueous organic flow battery.”