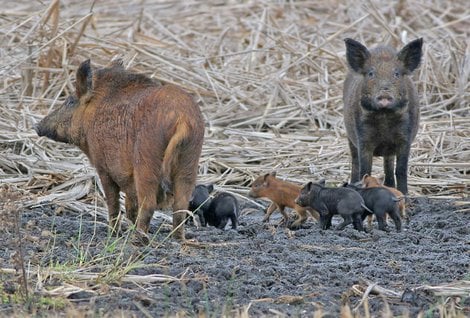 Coastal marshes that have been invaded by feral hogs recover from disturbances up to three times slower than non-invaded marshes and are far less resilient to sea-level rise, extreme drought and other impacts of climate change, a new study led by scientists at Duke University and the University of Massachusetts Boston (UMB) finds.

“Under normal circumstances, marshes can handle and recover from drought or sea level rise, given time, but there is no safety net in place for hog invasions,” said Brian Silliman, Rachel Carson Distinguished Professor of Marine Conservation Biology at Duke, who co-authored the study.

“Marshes that are invaded by hogs recover slower from drought, are less resilient to erosion, and hemorrhage carbon dioxide back into the air as hogs turn vast areas of the marsh into mud pits,” Silliman said.

“Based on data from our experiments, our disturbance-recovery model suggests full marsh recovery could take an extra 80 to 100 years,” he said.

Feral hogs are ravenous predators with an insatiable hunger for ribbed mussels, a shellfish species that is one of the most common – and ecologically important – inhabitants of southeastern salt marshes.

The mussels, which feed on tiny sea life, recycle part of their diet back into the marsh mud as concentrated nutrients that fuel the growth of marsh grasses. The grasses return the favor by shading and protecting the mussels. This “marsh mutualism” benefits the entire ecosystem by helping to stabilize the marsh from erosion, protect it against drought, and provide habitat for other species like crabs and snails.

Unlike other shellfish that burrow into the mud or sand, however, ribbed mussels grow together in mounds that dot the surface of the marsh landscape, making them easy targets for the hogs.

“We found that when hogs invade a salt marsh, ribbed mussels are eradicated from the area,” said Marc Hensel, who led the study as a postdoctoral scholar at Duke and UMB and is now a scientist at Virginia Institute of Marine Science.

“By both trampling along the edges of recovering marsh patches and by destroying mussel mounds that are a hotspot for biodiversity, feral hogs totally disable the key positive interactions that have made marshes so resilient to climate change,” Hensel said.

To conduct their study, they used a combination of field experiments, on-the-ground surveys, drone surveys and mathematical models to document how feral hogs affect marshes in the southeastern United States.

Much of their research was conducted at the Sapelo Island National Estuarine Research Reserve, where Hensel, Silliman, and their colleagues first observed feral hog effects in marshes in 2012, directly after an intense drought that lasted more than two years.

“Usually, drought forces marsh grass to retreat into mussel-rich patches and, when drought conditions subside, those patches form the nuclei for rapid post-drought recovery,” Hensel said. “However, we saw from drone imagery that some marshes were simply not recovering, and that was because those marshes were invaded by feral hogs that specifically target those same mussel-rich areas.”

Long-term field experiments showed that the post-drought recovery rate for these grasses was three times slower at sites where hogs were present. Many of the sites still had large stretches of patchy vegetation years after the drought ended.

“If the mussels don’t return, or if they do but the hogs keep depleting them, the marsh may remain patchy and disturbed forever,” said Silliman.

Without a total removal of feral hogs or reintroduction of their natural predators, the positive interactions that have kept southeastern marshes resilient to climate change until now will no longer be able to keep up, said Hensel.

“All coastal ecosystems in the Southeast are under threat now because feral hog numbers are exploding across the region. Established hog populations are expected in every county along the Gulf of Mexico and Atlantic coasts by 2025,” he noted.

That finding emphasizes a changing coastal landscape that is more frequently being shaped by large organisms that have unique roles in marine habitats, said Silliman.