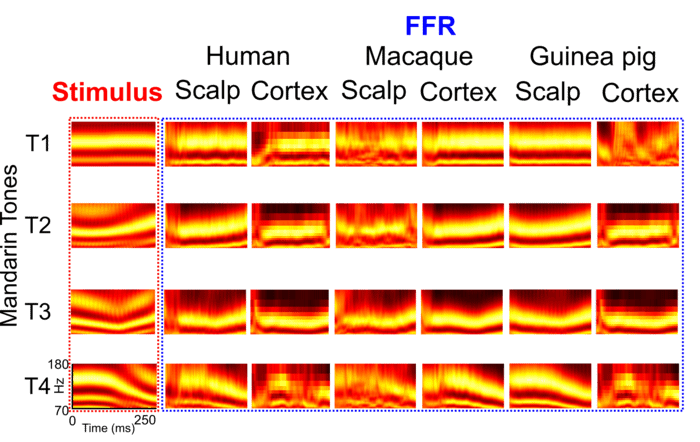 The sound profiles of Mandarin tones (T1-4) elicit similar frequency-following responses in humans (left), macaques (middle) and guinea pigs (right) both at the scalp and the auditory cortex

Speech sounds elicit comparable neural responses and stimulate the same region in the brain of humans, macaques and guinea pigs, a multidisciplinary group of University of Pittsburgh researchers reported in the journal eNeuro today. The finding could help pave the way for better understanding and diagnosis of auditory processing deficits.

The brain’s responses to sound—called frequency-following responses, or FFRs,—can be recorded from small electrodes placed onto a person’s scalp. They are used by clinicians to quickly assess a child’s hearing capacity and flag a slew of potential speech and language disorders, such as dyslexia and autism. But the method has a major drawback: It is lacking specificity.

“These tests can only tell us that something is off – but we don’t know what that ‘off’ is,” said co-corresponding author Bharath Chandrasekaran, Ph.D., professor and vice chair for research in the Department of Communication Science and Disorders at Pitt’s School of Health and Rehabilitation Sciences. “Understanding the source and mechanism of FFR generation would allow for the development of specific markers of speech impairments, which would be instrumental in improving clinical diagnostics of auditory processing deficits.”

The FFRs—which show up on a neurotypical brain electroencephalogram as a near carbon copy of the sound wave that the brain is interpreting and responding to—have the potential to complement hearing screening of newborns. If the baby’s brain produces an electrical response to a sound played though tiny headphones, then the neural pathway connecting the ear to the high-level information processing center in the brain cortex is developed and functional.

The FFRs are also used to identify any issues in auditory processing, or the way that the brain interprets sounds coming from the environment, especially speech. The closer the FFR profile resembles the profile of the sound source, the stronger the brain’s auditory processing capacity. In contrast, the more different the two profiles are, the higher the chances of diagnosing an auditory deficit.

Until recently, scientists thought that FFRs arise deep inside the brain stem—the brain’s innermost structures close to the base of the skull—and ripple outward, eventually reaching the surface of the brain and the scalp.

By combining electroencephalographic recordings from the scalp with recordings from electrodes placed inside the skull, Pitt researchers proved the long-standing theory wrong. They found that FFRs are generated not only at the brain stem, but also in the auditory cortex of the brain—the region responsible for the processing of sounds located right around the temple, only a few centimeters away from the surface of the skull—and that the pattern of FFR generation is similar across mammals.

In response to four different tones of the Mandarin syllable “yi,” the brains of English-speaking individuals who aren’t familiar with Mandarin Chinese generated similar FFRs as macaque monkeys and guinea pigs, both of which have very similar hearing range and sensitivity to humans.

“Recognizing the similarities between animal and human FFRs will allow us to study neural circuitry of sound processing in much greater detail,” said lead author Nike Gnanateja Gurindapalli, Ph.D., postdoctoral fellow at Pitt. “These explorations will further pave the way for new models of auditory processing in both typical and impaired auditory systems, which can eventually be used to infer auditory deficits using simple and effective non-invasive tools in the clinic.”

Because FFRs were traditionally thought to be generated outside the cortex in a passive way, researchers typically do not account for the degree of a person’s attention and alertness during the FFR recording. But the new discovery suggests the need to reconsider the way FFRs are collected and how they are interpreted and sets the scene for the development of better biomarkers of auditory processing deficits.

Between 5% and 10% of Americans have diagnosed communication disorders, researchers say. A better understanding of the way auditory deficits manifest in the brain can fill a critical gap in the development of fast, accurate and non-invasive diagnostics.