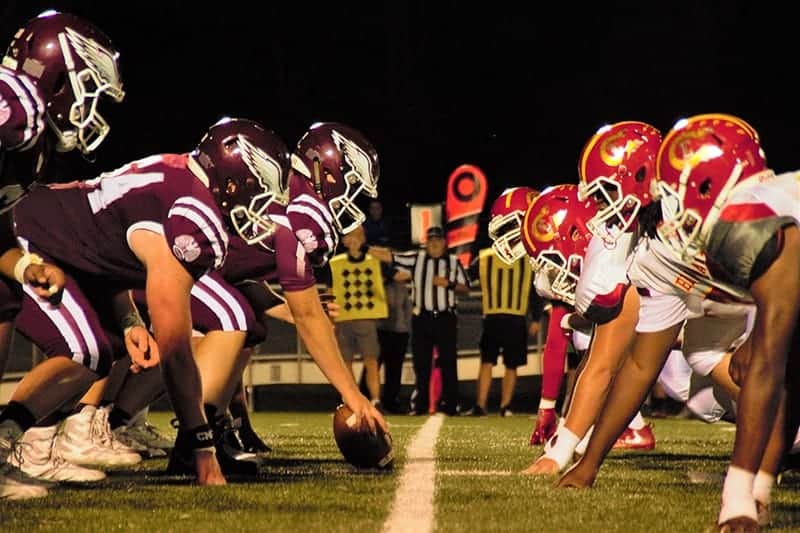 Offensive linemen could experience 40% less hits to the head in a game if they start off a play standing up rather than with fingers to the ground. (Credit: Unsplash)

White matter hyperintensities are areas that appear bright on magnetic resonance imaging (MRI) scans. They are common in people as they age and with medical conditions like high blood pressure.

“Our results are exciting because they show that white matter hyperintensities might capture long-term harm to the brain in people who have a history of repetitive head impacts,” said study author Michael Alosco, PhD, of the Boston University School of Medicine. “White matter hyperintensities on MRI may indeed be an effective tool to study the effects of repetitive head impacts on the brain’s white matter while the athlete is still alive.”

The study involved 75 people who were exposed to repetitive head impacts and had reported symptoms. This included 67 football players plus eight other athletes in contact sports like soccer and boxing, or military veterans. Of the football players, each of whom played an average of 12 years, 16 athletes played professionally and 11 played semi-professionally.

All donated their brains to research after their death in order to advance research into the long-term effects of repetitive head impacts. Researchers then looked at medical records, including scans which were done while the athletes were still alive. Participants had scans taken of their brains, on average, at age 62. The average age of the athletes at death was 67.

Of the participants, 64% were judged to have had dementia prior to death. This was determined by a discussion with their loved ones. Autopsies showed that 53 people, or 71%, had chronic traumatic encephalopathy (CTE). CTE is a neurodegenerative disease associated with repetitive head impacts, including those from football, that can progress to dementia.

After examining the brain scans, researchers found that for every unit difference in white matter hyperintensity volume, there was about twice the odds of having more severe small vessel disease and other indicators of white matter damage, as well as three times the odds of having more severe tau accumulation in the frontal lobe of the brain. Tau protein accumulation in the brain is a biomarker for progressive brain diseases like Alzheimer’s disease and CTE. Researchers also found that higher amounts of white matter hyperintensities were associated with more years of playing football.

When it came to completing daily tasks, greater amounts of white matter hyperintensities were associated with higher scores on a questionnaire about performing daily tasks that was completed by caregivers of the brain donors.

“There are key limitations to the study, and we need more research to determine the unique risk factors and causes of these brain lesions in people with a history of repetitive head impacts,” Alosco said.

Limitations of the study included the use of MRIs obtained for clinical, not research purposes, and that participants were mostly older, symptomatic, male, former American football players.

Learn more about concussion at BrainandLife.org, home of the American Academy of Neurology’s free patient and caregiver magazine focused on the intersection of neurologic disease and brain health. Follow Brain & Life® on Facebook, Twitter and Instagram.

The American Academy of Neurology is the world’s largest association of neurologists and neuroscience professionals, with over 36,000 members. The AAN is dedicated to promoting the highest quality patient-centered neurologic care. A neurologist is a doctor with specialized training in diagnosing, treating and managing disorders of the brain and nervous system such as Alzheimer’s disease, stroke, migraine, multiple sclerosis, concussion, Parkinson’s disease and epilepsy.