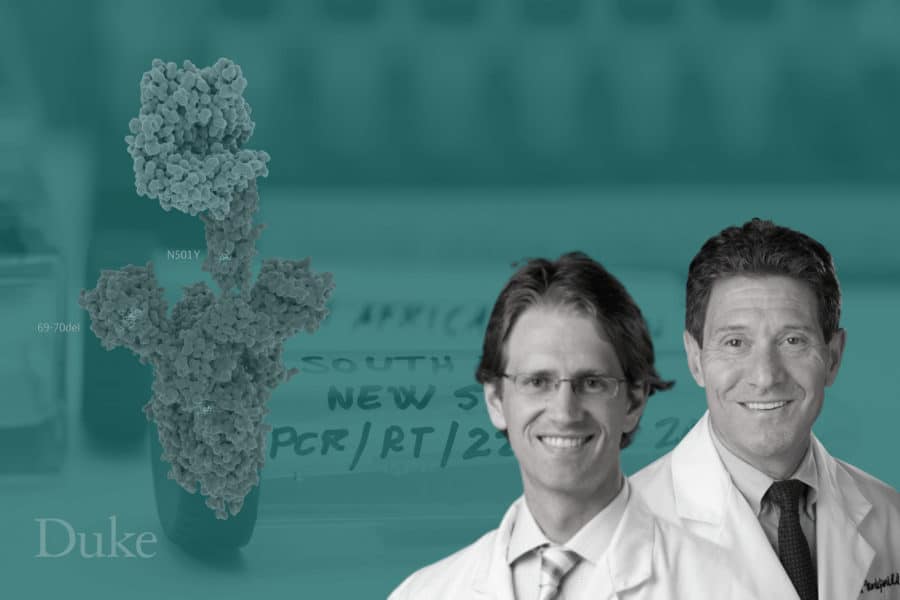 The new omicron variant of the COVID-19 virus has arrived just in time for the holidays, and health experts say it’s not yet clear whether existing vaccines will fight it off as successfully as they have previous mutations.

But more information is coming soon. Meanwhile, people should continue to mask, distance when they can, and make smart decisions about gathering in groups, health experts say.

Two Duke experts discussed these and other omicron-related issues Friday during a virtual briefing with journalists.

ON TIMELINE FOR LEARNING ABOUT OMICRON

“Multiple laboratories around the world are racing right now to isolate the virus and grow it up in the laboratory to do the initial test to give us an indication to what extent this variant might escape our vaccines.”

“The timeline: we will certainly see a lot of data before the holidays and I would expect to see some of those data coming out as early as a week to 10 days from now, some initial results. Those initial results will be testing serum samples from people who have received the various vaccines to see how well the antibodies in those serum samples are able to neutralize the virus in the laboratory. That is usually a fairly reliable predictor of how well the vaccines will be expected to work against a variant.”

“South Africa has a really quite robust reporting system in terms of how they’re sharing data with the rest of the world, which really needs to be celebrated. One of the things we’re seeing already is an uptick in hospitalizations. And yet over the next week or two what we’ll be able to carve into that a little more – is that uptick simply because of a larger number of people falling sick, or particularly how many people within those severe cases … were unvaccinated individuals, how many cases were in previously infected individuals. And that gives you a real clinical sense then about how well natural and vaccinated immunity is holding up in the real world.”

“These early laboratory tests that will be done do provide a fairly reliable indication of how we would expect the vaccines to perform against the variant, but you always need the clinical data to back it up. That is really the most important information.”

ON OMICRON IN THE US

“There have been small number of cases in the U.S. and I expect that number to increase substantially in the coming days. We do not have a clear idea of how contagious this variant is. Is it going to be more contagious than delta and out-compete delta? We really don’t know. It’s just too early.”

ON VACCINES AND VARIANTS

“We’re in uncharted territory here in terms of the ability of this virus to evade natural immunity and vaccine-induced immunity. We’re learning. It’s almost two years of a learning process now. We’re able to make predictions now that we couldn’t make before. But there’s still a lot of gaps in what we know.

We’re going to learn a lot from omicron that I believe will help us in the future as additional variants come down the pike.”

ON HOW VARIANTS IMPACT PATIENT TREATMENT

“We’ve seen so far with previous variants that vaccine and natural immunity has been very effective in mitigating severity. We’re still learning how that plays out here.”

ON PEOPLE DELAYING BOOSTERS DUE TO OMICRON EMERGENCE

“We are still dealing with, primarily, the Delta variant in the world and especially here in the United States. Elderly people and people who are immune-suppressed … really need to get boosted. Their immune system needs that extra boost to give them really good immunity. We’re dealing with Delta and that boost is going to be really important for those people to protect them from the current, predominant variant that is circulating.”

‘We are in a Delta wave still in the United States. One hundred percent of the cases we’ve seen recently here at Duke have all been Delta. It’s not a new variant causing that peak. When you overlap what’s happening in December – we’ve had a congregant activity which was Thanksgiving. We’ve had the widest and most frequently-used travel weekend.

“It’s getting colder and I think we have to be realistic that when that happens, what do we do? We as a community hunker down and spend more time inside, in close-knit areas where we know COVID transmits readily. I suspect that has nothing yet to do with variant activity and everything to do with the fact that, frankly, we’ve eased our guard off a little bit.”

ON COMPLACENCY AMONG VACCINATED

“Be sure to wear your mask. Do social distancing as much as possible. Avoid large gatherings and hopefully prevent this variant from taking off and really causing a problem.”

“We should anticipate that this variant could out-compete delta. We don’t know that, but we should be cautious and … behave in a way that would mitigate the spread of that variant and your risk of being exposed to it.”

“I think that’s a little premature. Certainly there have been reports from South African physicians already who say most of the omicron cases we’ve seen so far have been mild. But we need to remember that’s true for delta, that’s true for beta and gamma and all other variants too. It’s worth remembering the majority of the cases early on that have been picked up in South Africa have often occurred in young, healthy folk where we wouldn’t expect really severe cases.”

It’s only when you get to really analyze a variant like this over many more thousands of infections and look at the way it impacts hospitalization, look at the way severe infection takes place, that we’ll learn to address the issue of severity.”

With delta variant and alpha for that matter, it took quite a few more weeks after we already saw the virus was more contagious and was spreading for us to look at hospitalization rates and see that yes, here it’s also causing more severe illness.”

ON FLAT US VACCINATION RATES

“I think we definitely need to keep trying to get more and more people vaccinated. The way the pandemic has been going in the United States we have not reached that magic number of herd immunity.”

ON PLANNING FOR THE UPCOMING HOLIDAYS

“The big, fundamental difference [from last year] is that we are heavily vaccinated. That is a far better position than we were in (last year).”

“We also know what causes transmissions risk. We also know what allows viruses to spread. It’s me being in close, indoor environments without airway protection that a mask affords. It would be unwise, I think, for us to assume that simply because we’re more vaccinated than we were as an individual or as a community, that will certainly lead this to go away.”

“We sort of have had two years of thinking about top-down government rules and pandemic restrictions. I think we’re moving into a situation where it’s going to need to be much more individualized.”

“It has to be an individualized approach. It has to be community-centric. Let’s not stick our head in the sand and think this is just going to go away.”

“That ended up being a local outbreak despite the fact that the variant spread to many other parts of the world. South Africa is the only place where it really took off – and was a major problem for a while. We don’t know what is going to happen with omicron. Will it be a case like beta, and be primarily a problem where the initial outbreak occurred and not become a globally dominant variant? Or will it behave like alpha and delta did and swiftly become a dominant variant in the world?”

“We haven’t really seen a variant yet that has been a serious problem for our vaccines. We’re hoping that won’t be the case with omicron, but again, because there’s so many additional mutations, we just have to wait to get those answers.”

ON NEED FOR GLOBAL VACCINE RESPONSE

“Variants will continue to emerge at a pace that is somewhat proportional to the amount of virus that exists in our global community. It shouldn’t be news to people so far that we have had wide disparities and inequities in the way our vaccine has been distributed.”

David Montefiori, Ph.D.
David Montefiori is a professor and director of the Laboratory for AIDS Vaccine Research and Development at Duke University Medical Center, where he has studied the effectiveness of COVID-19 vaccines against new variants of the virus.