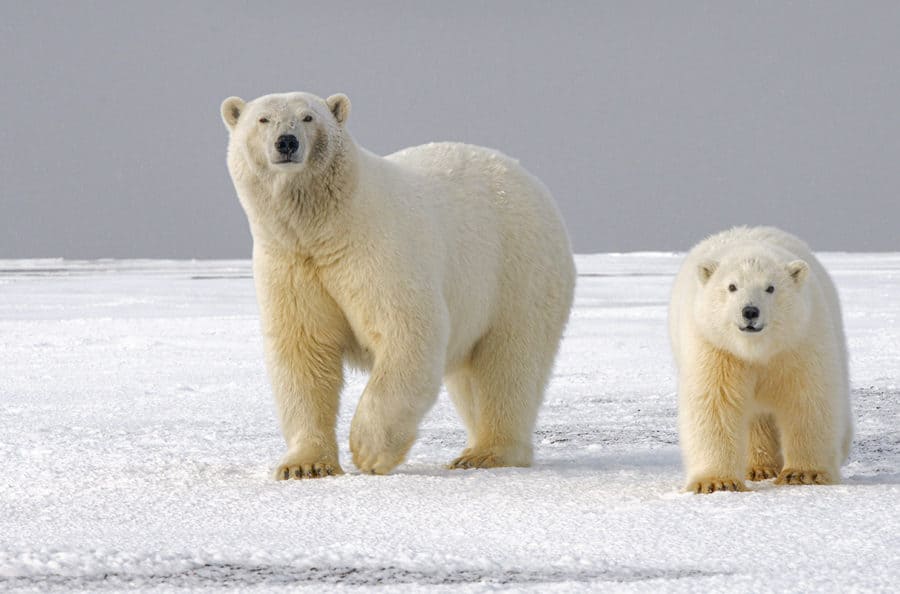 New WSU research shows over the last two decades polar bears are having to travel farther north of their traditional hunting grounds on the continental shelf to remain on their receding sea ice habitat (photo by Hans-Jurgen Mager on Unsplash).

In recent years, polar bears in the Beaufort Sea have had to travel far outside of their traditional arctic hunting grounds which has contributed to an almost 30% decrease in their population.

“Having to travel farther means these bears are expending more energy which can threaten their survival,” said Anthony Pagano, a postdoctoral researcher in Washington State University’s School of the Environment and lead author of the study. “If we want to preserve the habitat of these amazing mammals, then we need to focus on the root of the problem, which is slowing global climate change.”

For the study, Pagano and colleagues from the U.S. Geological Survey used satellite tracking data to analyze the movement patterns of female polar bears from 1986-2016 in the Beaufort Sea area north of Alaska.

Their work showed over the last two decades polar bears are having to travel farther north of their traditional hunting grounds on the continental shelf to remain on their receding sea ice habitat.

Extending around 100 miles north of Alaska and Canada, the continental shelf is a shallow water habitat that contains plenty of fish for the bears’ favorite prey, seals.

During the early summer when seals are weaning their pups and most vulnerable to attack, polar bears will often double their body weight from eating the fatty meat.

The researchers’ data show that as the sea ice over the continental shelf continues to recede earlier and further; the bears are being displaced from this primary foraging habitat and traveling further north into deeper waters where there are fewer seals to prey on.

“The combined impact of having to move farther and farther north with the ice in the summer and then having to move back in the fall and winter as the ice freezes is taking a major toll,” Pagano said. “Our work highlights the worrying impact of sea ice decline on polar bear movement patterns.”

Another interesting finding of the study is that around 20% of the polar bear population in the Beaufort Sea is foregoing their traditional sea ice hunting grounds altogether in the summer and fall. These bears are moving inland along the Alaskan and Canadian coast looking for food such as carrion, berries and sometimes even bowhead whale carcasses that are left on the shore by indigenous residents that hunt the large aquatic mammals.

“Sometimes you’ll have 50 to 100 polar bears that congregate around these whale carcasses and compete with each other for food,” Pagano said. “As more and more bears move on land, I suspect there’ll be a lot more competition for these food resources, and we’ll probably start seeing further decreases in abundance and survival.”

Moving forward, Pagano and his colleagues with the USGS plan to conduct further studies of the polar bears moving inland to get a better idea of how they are coping with their new terrestrial habitat.

He said the best thing humans can do to help preserve the southern Beaufort Sea’s 800 or so remaining polar bears is to focus on curbing global carbon emissions which are the main cause behind receding arctic sea ice.

Recent modeling work has shown that if regulations are enacted to reduce these emissions to avoid global warming greater than 2°C (3.6°F) then it could drastically slow the decline of polar bear habitat in the arctic which would in turn help these animals to survive.

“Coming across a polar bear while flying over the arctic in a helicopter is a surreal experience,” Pagano said. “They are incredibly massive and impressive. It is amazing to observe this animal that is so uniquely adapted to exist in this harsh arctic environment. They are worth the effort it will take to preserve them.”