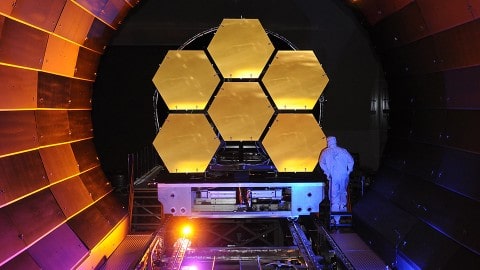 Twenty-five years in the making, the $10 billion telescope is an unprecedented observatory for space exploration. Unlike Hubble, the James Webb Space Telescope will work in infrared light, providing astronomers — including Northwestern’s Farhad Yusef-Zadeh — with the ability to peer into the early life of the universe, view Earth-size planets outside our solar system and learn about familiar and yet-to-be-discovered objects in our solar system.

NASA plans to launch Webb later this month from Europe’s spaceport in French Guiana, and live coverage will air on its website, NASA TV and the NASA app.

The folded-up telescope with its large mirror – featuring five times the light-gathering power of Hubble — will ride to orbit on a European Ariane 5 rocket. The journey to orbit — a million miles from Earth — will take one nerve-racking month. Once Webb unfolds and is operational, observations and science can begin, approximately six months after launch.

More than 1,000 teams of astronomers applied for time on Webb during its first year of observations, with only 286 teams successful.

More than 1,000 teams of astronomers from around the world applied for time on Webb during its first year of observations, with only 286 teams successful, according to an article in the journal Science. Zadeh, an expert in multiwavelength astronomy, is leading one of the fortunate international teams. Webb will help him look more closely at a mysterious flashing supermassive black hole located in the center of the Milky Way galaxy.

Zadeh is a professor of physics and astronomy and a faculty member at the Center for Interdisciplinary Exploration and Research in Astrophysics (CIERA) at the Weinberg College of Arts and Sciences.

Northwestern Now spoke to Zadeh about his work studying the black hole called Sagittarius A* (Sgr A*) and its extreme environment and what Webb will enable him to do.

What attracts you to studying this black hole?

Sagittarius A* is our black hole, the only supermassive black hole in our galaxy. And it’s actively flaring. You can learn quite a bit about the properties of the black hole when it flares. On average, there are five flares per day, each about 30 minutes long. They irradiate intensely and arise from hotspots in the accreting material that orbits the black hole. We want to understand what is behind this frequent flaring activity.

What excites you about Webb?

Hubble works mainly in the optical part of the light spectrum and is limited in many ways. Webb is a telescope on steroids, addressing lots of questions. As we monitor how the black hole behaves, Webb will allow us to observe emissions activity on an hourly time scale in two different infrared bands with the same telescope at the same time. That’s a big technical achievement. It’s very powerful to obtain continuous time coverage. Usually, we can only observe one band at a time and have to switch back and forth.

What will Webb allow you to do that is new?

New instrumentation always generates new discoveries. Webb will allow us to correlate radiation from the black hole in the near- and mid-infrared wavelengths with other types of radiation, such as radio waves, X-rays and gamma rays, detected by other telescopes. By studying flares across the spectrum of electromagnetic radiation, we will gain a better understanding of how flares behave and what the radiation mechanism is.

Our Webb data also will be used by my colleagues at the Event Horizon Telescope (EHT) to help them image Sagittarius A*. They don’t want the black hole image to be affected by the flickering. Data we get of any variable component can be subtracted from the EHT data to improve image quality of the shadow of the black hole.

When is your observation time on Webb?

Spring of 2023, to coordinate with the time the EHT’s network of observatories operates. We have two days with 12 hours each day. Flares are transient phenomena — we could get a big flare, a quiet flare or multiple flares next to each other or some combination. We may get some quiet time, but it’s unlikely we won’t see anything. We will learn quite a bit. It’s an exciting time, to live in an era where we can continue to discover new things.

I’m also part of another project with a group of Europeans looking at how stars are formed near our supermassive black hole. Its observation time will be earlier than the black hole project I’m leading.

What does Webb mean for others at Northwestern?

Webb and its data will mean a lot to many astronomers. A lot of discoveries will be made, whether direct or indirect. Webb certainly will be useful to the exoplanet community. Webb is a luxury, a telescope in space, and it can continuously observe. It will allow researchers to see changes in the orbits of exoplanets, for example.

Will you be watching the launch?

Definitely. Part is self-interest, and part is that Webb is an incredible, expensive and state-of-the-art instrument. Different dimensions come into this. I’m excited and nervous, but I’m all there and will be glued to online coverage.