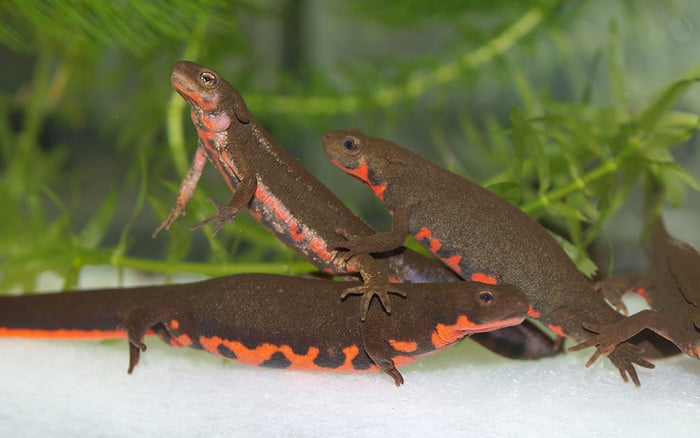 Although human skin heals from injuries and wounds, many of us have scars that are left behind. Scar formation happens in adult mammals because skin regeneration does not fully occur. This poses a challenge to physicians who wish to conduct surgeries without scars appearing afterwards. In a newly published article in Biomedicines, a team led by researchers at the University of Tsukuba investigated the use of the adult newt, Cynops pyrrhogaster, as a model system for studying scarless wound healing for technology development in surgical and cosmetic medicine.

After an injury occurs, the epidermis, which is the outer layer of the skin, can grow and migrate to fill in the wound. This is known as re-epithelialization. Although this takes place, the original skin color and texture is sometimes not retained, leading to the appearance of what we know as a scar. Processes called granulation and dermal fibrosis underpin scar formation, making them a focus for scientists aiming to minimize scarring following clinical procedures. Amphibians have been used as animal models for studying this, because they do not scar prior to metamorphosis. However, it is not clear what happens to fully mature amphibian skin.

“We chose to examine the adult Japanese fire-bellied newt, which is a type of salamander that is well understood on the genetic level,” explains Dr. Tatsuyuki Ishii, lead author of the study. “We know adult newts are capable of complicated tissue, organ, and limb regeneration. Despite that, their ability to regenerate skin has not been scientifically demonstrated.”

The team excised a small piece of skin from various body parts of adult newts, including the head, trunk, limbs, and abdomen. They periodically observed the skin healing and regeneration progression for up to two years, making note of re-epithelialization and dermal fibrosis, as well as recovery of texture, appendage, and color.

“Interestingly, we found that the adult newts could successfully and fully regenerate their skin at each part of the body that we examined,” describes Professor Chikafumi Chiba, senior author. “Re-epithelialization occurred at all locations, while no dermal fibrosis was observed at all.”

However, the original color pattern of the dorsal-lateral and ventral skin was not restored. Because humans do not have such color patterns, the researchers believed this to be a newt-specific issue. Thus, they concluded that Cynops pyrrhogaster could be a perfect model system for investigating skin regeneration and scar formation in humans.

The team also further studied skin regeneration in these newts at the morphological and molecular level. The wounds tended to heal within only a few days, while skin regeneration took up to two years to complete. Inflammatory gene markers were only briefly expressed during wound healing.

“Dermal fibrosis is often characterized by prolonged inflammation at the wound site,” explains Dr. Ishii. “Scar-free skin occurred in the newts through rapid re-epithelialization and skipping of granulation and dermal fibrosis.”

Overall, these findings will be crucial for future studies in humans focusing on efforts to prevent scarring in human skin following various medical procedures.

Funding: This research was funded by the Ministry of Education, Culture, Sports, Science and Technology (221S0002) and the Japan Society for the Promotion of Science (18H04061) to C.C.

The article, “Skin Wound Healing of the Adult Newt, Cynops pyrrhogaster: A Unique Re-Epithelialization and Scarless Model,” was published in Biomedicines.