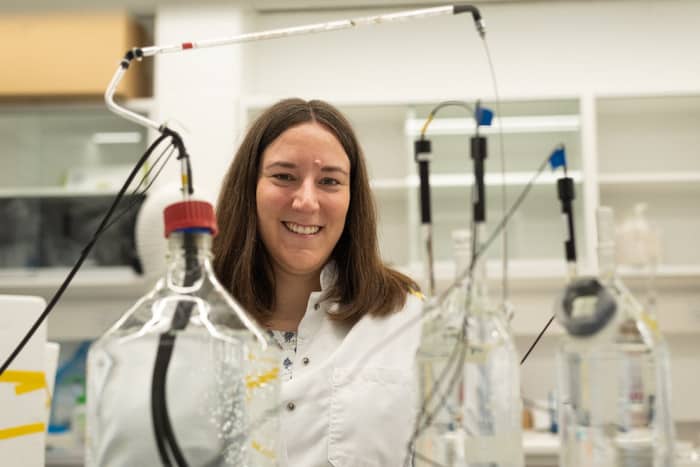 There is more going on in the deep, dark ocean waters than you may think: Uncountable numbers of invisible microorganisms go about their daily lives in the water columns, and now researchers have discovered that some of them produce oxygen in an unexpected way.

The study is led by Beate Kraft and Donald E. Canfield from University of Southern Denmark and published in the journal Science (doi 10.1126/science.abe6733). Contributing authors are Nico Jehmlich, Morten Larsen, Laura Bristow, Martin Könneke and Bo Thamdrup. Beate Kraft is an assistant professor at Department of Biology. Her focus is on microbial physiology and biochemistry, and her research is supported by a Villum Young Investigator Grant. Don E. Canfield is Professor of Ecology at the Department of Biology and Danish Institute for Andvance Study chair of Biology.

Oxygen is vital for life on Earth, and is mainly produced by plants, algae and cyanobacteria via photosynthesis. A few microbes are known to make oxygen without sunlight, but so far they have only been discovered in very limited quantities and in very specific habitats.

Ghost organisms hanging out in the dark

“These guys are really abundant in the oceans, where they play an important role in the nitrogen cycle. For this they need oxygen, so it has been a long standing puzzle why they are also very abundant in waters where there is no oxygen”, says biologist Beate Kraft, adding:

-“We thought; They just hang out there with no function; they must be some kind of ghost cells”.

But there was something puzzling to this;

“These microbes are so common, that every 5th cell in a bucket of sea water is one of them”, adds Don Canfield, co-author of the paper.

So the researchers became curious; could they have a function in the oxygen depleted water after all?

They make their own oxygen

Beate Kraft decided to test them in the lab;

“We wanted to see what would happen if they ran out of oxygen – like they do when they move from the oxygen rich waters to oxygen depleted waters. Would they survive?”

“We saw how they used up all the oxygen in the water, and then to our surprise, within minutes, oxygen levels started increasing again. That was very exciting!”, Don Canfield recalls.

Enough for me and my friends

Nitrosopumilus maritimus turned out to be able to make oxygen in a dark environment. Not much – not at all so much that it would influence oxygen levels on Earth, but enough to keep itself going.

“If they produce a little more oxygen than they need themselves, it will quickly be taken by other organisms in their neighborhood, so this oxygen would never leave the ocean”, Beate Kraft explains.

But what effect do they have on the environment they live in, these extremely abundant oxygen-producing microbes?

Researchers already knew that the ammonia oxidizing archaea are microorganisms, that keep the global nitrogen cycle going, but they were not aware of the full extent of their capabilities.

In the newly discovered pathway, Nitrosopumilus maritimus couples the oxygen production to the production of gasous nitrogen. By doing so they remove bioavailable nitrogen from the environment.

“If this lifestyle is widespread in the oceans, it certainly forces us to rethink our current understanding of the marine nitrogen cycle”, adds Beate Kraft.

“My next step is to investigate the phenomenon we saw in our lab cultures in oxygen depleted waters in various ocean spots around the world”, she adds.

Her research team has already taken samples in Mariager Fjord in Denmark, and next stop is the waters off Mexico and Costa Rica.