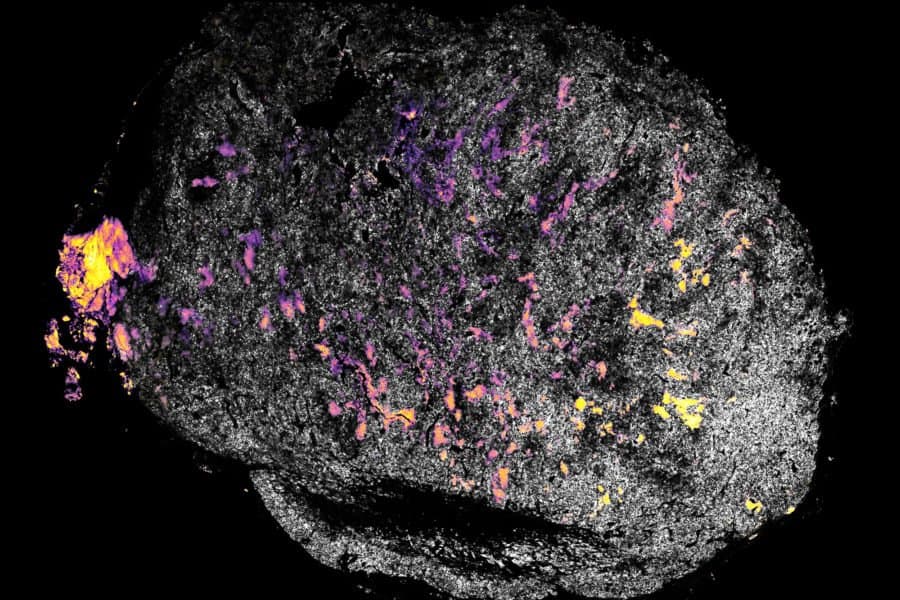 Stimulating the body’s immune system to attack tumors is a promising way to treat cancer. Scientists are working on two complementary strategies to achieve that: taking off the brakes that tumors put on the immune system; and “stepping on the gas,” or delivering molecules that jumpstart immune cells.

However, when jumpstarting the immune system, researchers have to be careful not to overstimulate it, which can cause severe and potentially fatal side effects. A team of MIT researchers has now developed a new way to deliver a stimulatory molecule called IL-12 directly to tumors, avoiding the toxic effects that can occur when immunostimulatory drugs are given throughout the body.

In a study of mice, this new treatment eliminated many tumors when delivered along with an FDA-approved drug that takes the brakes off the immune system.

“Even beyond this particular case of IL-12, which we really hope will have some impact, it’s a strategy that you could apply to any of these immunostimulatory drugs,” says Darrell Irvine, who is the Underwood-Prescott Professor with appointments in MIT’s departments of Biological Engineering and Materials Science and Engineering; an associate director of MIT’s Koch Institute for Integrative Cancer Research; and a member of the Ragon Institute of MGH, MIT, and Harvard.

The researchers have filed for patents on their strategy, and the technology has been licensed to a startup that hopes to begin clinical trials by the end of 2022.

Stepping on the gas

As tumors develop, they secrete molecules that disable nearby T cells and other immune cells, allowing the tumors to grow unchecked. Drugs known as checkpoint blockade inhibitors, which can take these brakes off the immune system, are now used to treat some types of cancer, but many other types are resistant to this kind of treatment.

Combining checkpoint inhibitors with drugs that stimulate the immune system could potentially make cancer immunotherapy work for more patients. Cytokines, which are immune chemicals naturally produced by the body, are one class of drugs that researchers have tried as a way to “step on the gas.” However, in clinical trials, these drugs have shown too many toxic side effects, ranging from flu-like symptoms to organ failure.

“If you soak the patient in cytokines, their whole body reacts and you get such a strong, toxic side effect that you can’t reach the levels you wish you could within the tumor and get the effects that you want,” Wittrup says.

To try to avoid those side effects, Wittrup and Irvine have been working on ways to deliver cytokines in a more targeted way. In a 2019 study, they showed that they could deliver the cytokines IL-12 and IL-2 directly to tumors by attaching the cytokines to a collagen-binding protein. This protein then sticks to collagen found in tumors, which usually have large amounts of collagen.

This strategy worked well in a study of mice, but the researchers wanted to find a way to make cytokines bind even more strongly to tumors. In their new study, they replaced the collagen-binding protein with aluminum hydroxide. This compound, also called alum, is often used as a vaccine adjuvant (a drug that helps boost the immune response to vaccination).

“One major advantage of alum is that the particles are on the micron size scale, so when you inject them in people or in mice, they stay wherever you inject them for weeks, going on to months sometimes,” Agarwal says.

To test the effectiveness of this treatment, the researchers gave mice one injection of IL-12 or IL-2 bound to alum particles, and treated the mice with a checkpoint blockade inhibitor called anti-PD1 every few days.

In mouse models of three types of cancer, the researchers found that the tumors were eliminated in 50 to 90 percent of the mice. In a model where breast cancer cells were transplanted into mice, and then metastasized to the lungs, one injection at the breast cancer site also cleared the metastatic tumors, even though IL-12 was not injected into the lungs.

Alum-IL-12 particles given without the checkpoint blockade inhibitors also showed some ability to stimulate the immune system to fight tumors.

Further studies showed that IL-12 stimulates the production of another cytokine called interferon gamma, and these two molecules work together to activate T cells as well as dendritic cells and macrophages. The treatment also stimulates memory T cells that may be able to respond to tumors that regrow.

The researchers also found that the treated mice did not show any of the side effects that are seen when IL-12 is given systemically. The startup company that has licensed the technology plans to first test IL-12-alum particles on their own, and if that treatment is shown to be safe, they hope to test Il-12 in combination with checkpoint blockade inhibitors.

The new approach of attaching molecules to alum could also be used to deliver other types of immunostimulatory drugs, the researchers say.

“This whole class of drugs that involves stepping on the gas has largely not succeeded yet. Our hope is that this opens the way to test any of those drugs,” Irvine says.