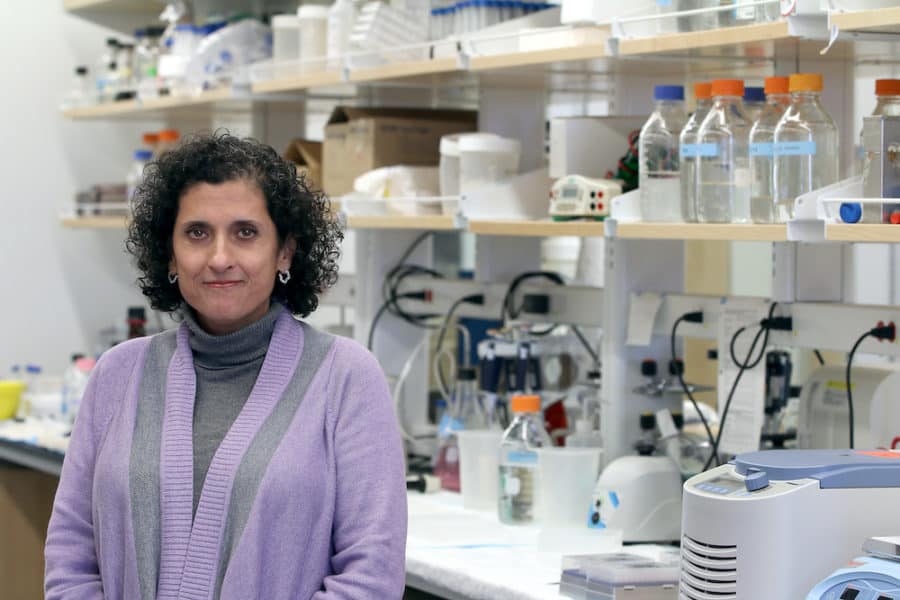 A research team at the Medical University of South Carolina (MUSC) led by Carol Feghali-Bostwick, Ph.D., reports in the Journal of Clinical Investigation (JCI) Insight that the E4 peptide reverses fibrosis, or scarring, in human and mouse tissues by activating an antifibrotic pathway that is common to all organ systems.

The team’s findings are significant because they suggest that the peptide could be effective at reversing fibrosis in multiple organ systems. Fibrosis is implicated in a wide range of diseases, including heart disease, lung fibrosis, liver cirrhosis and chronic kidney disease.

“Now that we know how the peptide works, we’re confident that it will be beneficial for fibrosis in different organs.”

Feghali-Bostwick, senior author of the article, identified the E4 peptide as a potent antifibrotic agent while working at the University of Pittsburgh before joining MUSC as the SmartState and Kitty Trask Holt Endowed Chair in Scleroderma Research in 2013. However, the mechanism by which it reversed fibrosis remained incompletely understood.

The two lead authors of the JCI Insight article, Shailza Sharma, Ph.D., and Tomoya Watanabe, M.D., Ph.D., both members of Feghali-Bostwick’s MUSC laboratory, finalized the work started by Tetsuya Nishimoto, Ph.D., a postdoctoral fellow at MUSC who unexpectedly passed away after a brief illness in 2016, to uncover that mechanism.

“We identified this peptide about a decade ago and described its antifibrotic activity in different tissues,” explained Feghali-Bostwick. “Our current work explains how the peptide exerts antifibrotic effect and what makes it so effective.”

All organ systems share a common path to end-stage fibrosis: excessive production and deposition of collagen and similar proteins. Collagen is the body’s connective tissue and provides the physical scaffolding for our organs. However, excess collagen can cause organs to shrink, harden and cease to function properly. Patients with end-stage fibrosis have few treatment options and many will require organ transplantation.

The E4 peptide is derived from a fragment of a collagen protein. However, when the parent protein is cut, the resulting fragment can have several different roles, including stopping fibrosis.

To understand more fully how E4 reverses fibrosis, the MUSC team performed studies to determine how it interacted with other proteins in the body. E4 had effects on proteins involved in the urokinase pathway, which is known to inhibit fibrosis. The pathway functions by ultimately activating enzymes that break down excess collagen. The pathway also stops further production of fibrotic collagens.

The team conducted its studies by using cells collected from human lungs. Team members also constructed tissue cores from fibrotic lungs donated from patients with lung fibrosis. Healthy lungs are more commonly donated, so tissue cores were also constructed from them, and then fibrosis was induced. These tissue cores provide a model that is more relevant to human disease than cells alone.

E4 was able to reverse fibrosis even in the end-stage fibrotic lungs. Results were then reproduced in mice with lung fibrosis, showing that E4 had the same functions in a dish and in a living system, activating the urokinase pathway in both cases.

“It had already been shown that, when activated, the urokinase pathway can effectively reverse fibrosis in different organs,” said Feghali-Bostwick. “We found a way to activate it with the peptide.”

The MUSC study linked the E4 peptide with this known antifibrotic pathway to provide a possible clinical solution for patients with fibrosis.

“The intellectual property around the peptide has already been licensed, and there’s a company developing it,” said Feghali-Bostwick. The company, iBio Inc. (Bryan, TX), is currently doing preclinical testing of the peptide and preparing for phase 1 safety trials.

“Now that we know how the peptide works, we’re confident that it will be beneficial for fibrosis in different organs,” said Feghali-Bostwick.

No negative side effects were seen in the experimental models on which E4 was tested.

“The peptide is derived from a natural molecule in the body, so we don’t expect it to have side effects,” she explained.

Surprisingly, E4 activates the urokinase pathway by binding to a cell membrane protein called enolase that is involved in sugar breakdown. Further research will have the team looking into different binding partners, additional mechanisms through which E4 can prevent and reverse fibrosis and the ideal length of the E4 peptide.

It is meticulous basic research such as this that leads to clinical breakthroughs, according to Feghali-Bostwick.

“It is important to appreciate the power of basic research in identifying possible therapies, which can then be developed by companies to provide translational solutions for patients.”

Carol Feghali-Bostwick, Ph.D., is an inventor on a patent for the antifibrotic effects of E4 and has received research funding from iBio Inc., which has licensed the intellectual property from the University of Pittsburgh. Feghali-Bostwick is also the inventor on several pending patent applications filed by MUSC related to improvements and additional methodologies for the E4 peptide.