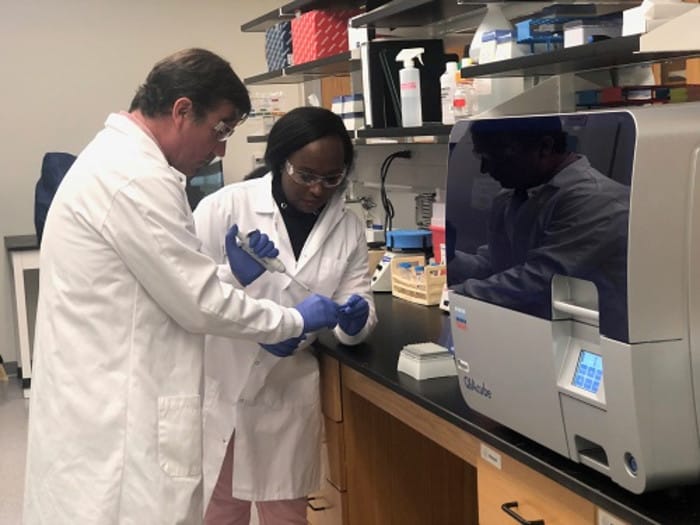 Scientists with the USF Genomics program and Center for Global Health and Infectious Disease Research have taken a significant step in providing the people of Rwanda the scientific tools they need to help address mental health issues that stemmed from the 1994 genocides of the Tutsi ethnic group.

In a first of its kind study, Professors Monica Uddin and Derek Wildman of the College of Public Health looked at the entire genomes of Tutsi women who were pregnant and living in Rwanda at the time of the genocide and their offspring and compared their DNA to other Tutsi women pregnant at the same time and their offspring, who were living in other parts of the world.

In the study published in “Epigenomics,” they found that the terror of genocide was associated with chemically modifications to the DNA of genocide-exposed women and their offspring. Many of these modifications occurred in genes previously implicated in risk for mental disorders such as PTSD and depression. These findings suggest that, unlike gene mutations, these chemical “epigenetic” modifications can have a rapid response to trauma across generations.

“Epigenetics refers to stable, but reversible, chemical modifications made to DNA that help to control a gene’s function,” Uddin said. “These can happen in a shorter time frame than is needed for changes to the underlying DNA sequence of genes. Our study found that prenatal genocide exposure was associated with an epigenetic pattern suggestive of reduced gene function in offspring.”

The team, which includes Clarisse Musanabaganwa, a visiting scholar from the University of Rwanda and her colleagues, came to their conclusion following the review of DNA from blood samples from 59 individuals – about half exposed personally or exposed in utero to the genocide. Exposure is defined as being impacted by genocide-related trauma, such as rape or evading capture, witnessing murder or serious attack with a weapon and seeing dead and mutilated bodies.

The novel study is part of a larger consortium, the Human, Heredity & Health in Africa (H3), which is funded by the National Institutes of Health. It’s an effort to empower scientists in Africa in genomics, increasing their independence and ability to build the infrastructure needed to enhance genetic studies across the continent, and ultimately better capture data on the human genome across the world.

“The Rwandan people who are in this study and community as a whole really want to know what happened to them because there’s a lot of PTSD and other mental health disorders in Rwanda and people want answers as to why they’re experiencing these feelings and having these issues,” Wildman said.

While this study looks specifically at the impact of the 1994 Rwandan genocide, it supports previous studies that show what occurs during pregnancy when one is a fetus can have long-term impacts – many symptoms not appearing until later in life. Such evidence proves the need to enhance efforts to protect the safety and emotional and psychological wellbeing of pregnant women.

Researchers point out that individuals who were in utero during the genocide are starting to have children of their own and they hope to soon look at whether or not that trauma has had an epigenetic impact on the third generation. They’re now awaiting a new, larger batch of DNA samples to find out how trauma can impact risk for specific mental health disorders, like PTSD.