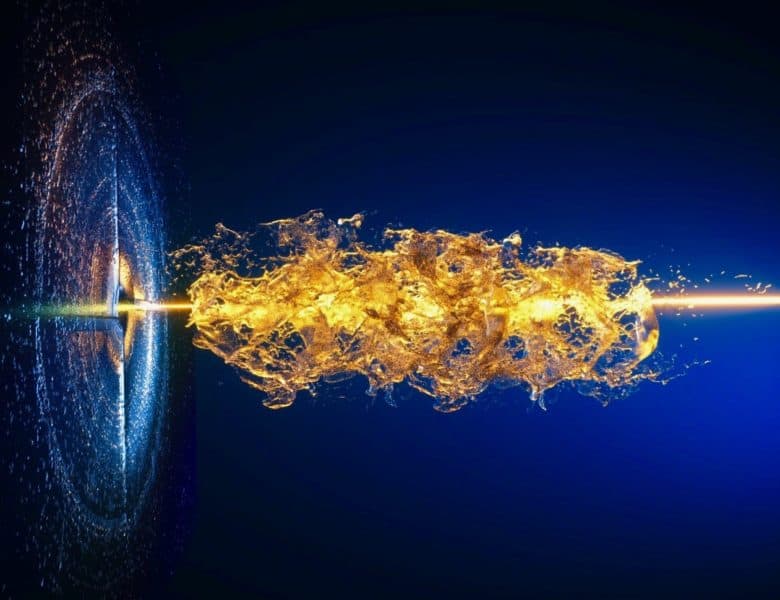 An illustration of the serial femtosecond X-ray crystallography process, showing a jet of liquid solvent combined with the sample particles being blasted with the laser beam to capture diffraction data. This action is completed in just a few femtoseconds – that is quadrillionths of a second, or a few millionths of one billionth of a second. (Credit: Ella Maru Studio)

Francis Crick, who famously co-discovered the shape of DNA, once said: “If you want to understand function, study structure.” Many decades later, this remains a tenet of biology, chemistry, and materials science.

A key breakthrough in the quest for DNA’s structure came from X-ray crystallography, a technique that maps the density of electrons in a molecule based on how beams of X-ray radiation diffract through the spaces between atoms in the sample. The diffraction patterns generated by crystallography can then be used to deduce the overall molecular structure. Thanks to a steady stream of advances over the decades, X-ray crystallography is now exponentially more powerful than it was in Crick’s time, and can even reveal the placement of individual atoms.

Yet the process is not easy. As the name implies, it requires crystals – specifically, purified samples of the molecule of interest, coaxed into a crystal form. And not all molecules form picture-ready crystals.

“X-ray crystallography is most straightforward when the material can be grown into a large single crystal,” said Nicholas Sauter, a computer senior scientist at Lawrence Berkeley National Laboratory (Berkeley Lab), in the Molecular Biophysics and Integrated Bioimaging (MBIB) division. “However, most substances instead form powders composed of small granules, whose X-ray diffraction patterns are harder to disentangle.”

Sauter is co-leading a team working to provide a better way for scientists to study the structures of the many materials that don’t form tidy single crystals, such as solar absorbers and metal-organic frameworks: two diverse material groups with huge potential for combating climate change and producing renewable energy.

Their new technique, called small-molecule serial femtosecond X-ray crystallography, or smSFX, supercharges traditional crystallography with the addition of custom-built image processing algorithms and an X-ray free electron laser (XFEL). The XFEL, built from a fusion of particle accelerator and laser-based physics, can point X-ray beams that are much more powerful, focused, and speedy than other X-ray sources for crystallography. The entire process, from X-ray pulse to diffraction image, is completed in a few quadrillionths of a second.

“It’s diffraction before destruction,” said Daniel Paley, an MBIB project scientist and author on the team’s new paper, published today in Nature. “The idea is that the crystal is going to explode instantly when it’s hit by this beam of photons, but with a femtosecond pulse, you collect all the diffraction data before the damage occurs. It’s really cool.”

Paley and co-leader Aaron Brewster, a research scientist in MBIB, developed the algorithms needed to convert XFEL data into high-quality diffraction patterns that can be analyzed to reveal the unit cell – the basic unit of a crystal that is repeated over and over in three dimensions – of each tiny crystalline grain within the sample.

When you have a true powder, Paley explained, it’s like having a million crystals that are all jumbled together, full of imperfections, and scrambled in every possible orientation. Rather than diffracting the whole jumble together and getting a muddied readout of electron densities (which is what happens with existing powder diffraction techniques), smSFX is so precise that it can diffract individual granules, one at a time. “This gives it a special sharpening effect,” he said. “So that is actually the kind of secret sauce of this whole method. Normally you shoot all million at once, but now you shoot 10,000 all in sequence.”

The cherry on top is that smSFX is performed without freezing the sample or exposing it to a vacuum – another benefit for the delicate materials studied by materials scientists. “No fancy vacuum chamber required,” said Sauter.

In the new study, the team demonstrated proof-of-principle for smSFX, then went one step further. They reported the previously unknown structures of two metal-organic materials known as chacogenolates. Nathan Hohman, a chemist physicist at University of Connecticut and the project’s third co-leader, studies chacogenolates for their semiconducting and light-interaction properties, which could make them ideal for next-generation transistors, photovoltaics (solar cells and panels), energy storage devices, and sensors.

“Every single one of these is a special snowflake – growing them is really difficult,” said Hohman. With smSFX, he and graduate student Elyse Schriber were able to successfully diffract powder chacogenolates and examine the structures to learn why some of the silver-based materials glow bright blue under UV light, a phenomenon that the scientists affectionately compare to Frodo’s sword in The Lord of the Rings.

“There is a huge array of fascinating physical and even chemical dynamics that occur at ultrafast timescales, and our experiment could help to connect the dots between a material’s structure and its function,” said Schriber, a Berkeley Lab affiliate and researcher in Hohman’s lab. “After further improvements are made to streamline the smSFX process, we can imagine programs to offer this technique to other researchers. These types of programs are integral for increasing access to light source facilities, especially for smaller universities and colleges.”