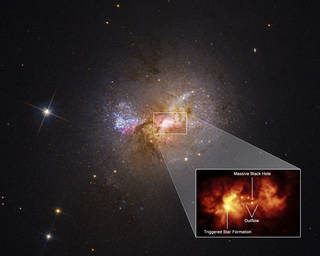 A pullout of the central region of dwarf starburst galaxy Henize 2-10 traces an outflow, or bridge of hot gas 230 light-years long, connecting the galaxy's massive black hole and a star-forming region. Hubble data on the velocity of the outflow from the black hole, as well as the age of the young stars, indicates a causal relationship between the two. A few million years ago, the outflow of hot gas slammed into the dense cloud of a stellar nursery and spread out, like water from a hose impacting a mound of dirt. Now clusters of young stars are aligned perpendicular to the outflow, revealing the path of its spread.

Often portrayed as destructive monsters that hold light captive, black holes take on a less villainous role in the latest research from NASA’s Hubble Space Telescope. A black hole at the heart of the dwarf galaxy Henize 2-10 is creating stars rather than gobbling them up. The black hole is apparently contributing to the firestorm of new star formation taking place in the galaxy. The dwarf galaxy lies 30 million light-years away, in the southern constellation Pyxis.

A decade ago this small galaxy set off debate among astronomers as to whether dwarf galaxies were home to black holes proportional to the supermassive behemoths found in the hearts of larger galaxies. This new discovery has little Henize 2-10, containing only one-tenth the number of stars found in our Milky Way, poised to play a big part in solving the mystery of where supermassive black holes came from in the first place.

“Ten years ago, as a graduate student thinking I would spend my career on star formation, I looked at the data from Henize 2-10 and everything changed,” said Amy Reines, who published the first evidence for a black hole in the galaxy in 2011 and is the principal investigator on the new Hubble observations, published in the January 19 issue of Nature.

“From the beginning I knew something unusual and special was happening in Henize 2-10, and now Hubble has provided a very clear picture of the connection between the black hole and a neighboring star forming region located 230 light-years from the black hole,” Reines said.

That connection is an outflow of gas stretching across space like an umbilical cord to a bright stellar nursery. The region was already home to a dense cocoon of gas when the low-velocity outflow arrived. Hubble spectroscopy shows the outflow was moving about 1 million miles per hour, slamming into the dense gas like a garden hose hitting a pile of dirt and spreading out. Newborn star clusters dot the path of the outflow’s spread, their ages also calculated by Hubble.

This is the opposite effect of what’s seen in larger galaxies, where material falling toward the black hole is whisked away by surrounding magnetic fields, forming blazing jets of plasma moving at close to the speed of light. Gas clouds caught in the jets’ path would be heated far beyond their ability to cool back down and form stars. But with the less-massive black hole in Henize 2-10, and its gentler outflow, gas was compressed just enough to precipitate new star formation.

“At only 30 million light-years away, Henize 2-10 is close enough that Hubble was able to capture both images and spectroscopic evidence of a black hole outflow very clearly. The additional surprise was that, rather than suppressing star formation, the outflow was triggering the birth of new stars,” said Zachary Schutte, Reines’ graduate student and lead author of the new study.

Ever since her first discovery of distinctive radio and X-ray emissions in Henize 2-10, Reines has thought they likely came from a massive black hole, but not as supermassive as those seen in larger galaxies. Other astronomers, however, thought that the radiation was more likely being emitted by a supernova remnant, which would be a familiar occurrence in a galaxy that is rapidly pumping out massive stars that quickly explode.

“Hubble’s amazing resolution clearly shows a corkscrew-like pattern in the velocities of the gas, which we can fit to the model of a precessing, or wobbling, outflow from a black hole. A supernova remnant would not have that pattern, and so it is effectively our smoking-gun proof that this is a black hole,” Reines said.

Reines expects that even more research will be directed at dwarf galaxy black holes in the future, with the aim of using them as clues to the mystery of how supermassive black holes came to be in the early universe. It’s a persistent puzzle for astronomers. The relationship between the mass of the galaxy and its black hole can provide clues. The black hole in Henize 2-10 is around 1 million solar masses. In larger galaxies, black holes can be more than 1 billion times our Sun’s mass. The more massive the host galaxy, the more massive the central black hole.

So far, none of these black hole seeding theories has taken the lead. Dwarf galaxies like Henize 2-10 offer promising potential clues, because they have remained small over cosmic time, rather than undergoing the growth and mergers of large galaxies like the Milky Way. Astronomers think that dwarf galaxy black holes could serve as an analog for black holes in the early universe, when they were just beginning to form and grow.

“The era of the first black holes is not something that we have been able to see, so it really has become the big question: where did they come from? Dwarf galaxies may retain some memory of the black hole seeding scenario that has otherwise been lost to time and space,” Reines said.

The Hubble Space Telescope is a project of international cooperation between NASA and ESA (European Space Agency). NASA’s Goddard Space Flight Center in Greenbelt, Maryland, manages the telescope. The Space Telescope Science Institute (STScI) in Baltimore, Maryland, conducts Hubble science operations. STScI is operated for NASA by the Association of Universities for Research in Astronomy in Washington, D.C.