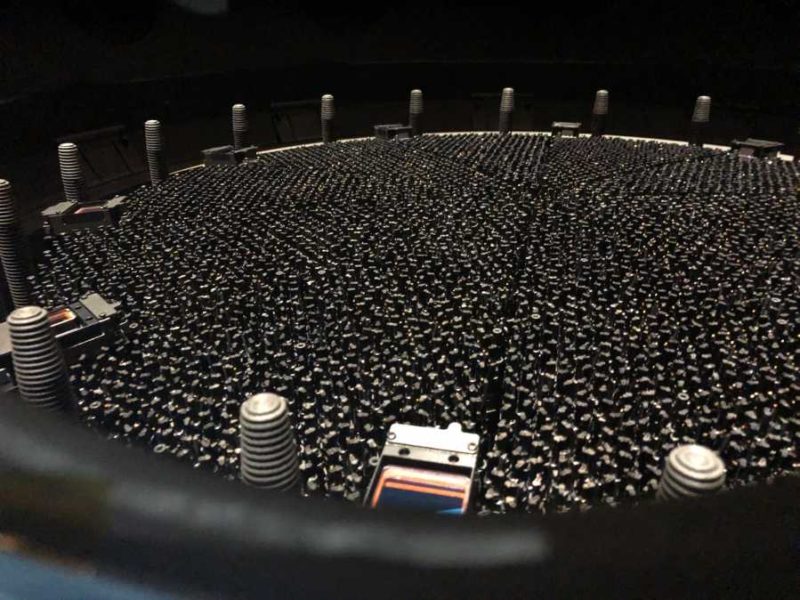 A collaboration of scientists that includes researchers from the University of Arizona’s Steward Observatory and Department of Astronomy has created the largest and most detailed 3D map of the universe to date, released Jan. 13.

Using the Dark Energy Spectroscopic Instrument, or DESI, the collaboration capped off its first seven-month observation run – only 10% of its scheduled five-year surveying time – by observing more galaxies than any previous 3-D galaxy survey.

DESI is a powerful astronomy instrument installed at the Nicholas U. Mayall telescope at Kitt Peak National Observatory near Tucson. The goal of the instrument, which saw first light in 2019, is to create a map of galaxies to shed light on a mysterious force known as dark energy, and thereby give physicists and astronomers a better understanding of the nature of the universe.

DESI is managed by the Department of Energy’s Lawrence Berkeley National Laboratory with primary funding for construction and operations from the department’s Office of Science.

The technical performance and cosmic achievements of the DESI survey are helping scientists, including those at UArizona, learn about the most powerful sources of light in the universe and better understand the distant past, going back more than 10 billion years, when galaxies were still young.

Ragadeepika Pucha, a doctoral student at UArizona, and her colleagues are using DESI data to understand the behavior of intermediate-mass black holes in small galaxies. Enormous black holes are thought to inhabit the cores of nearly every large galaxy, including the Milky Way. But whether small galaxies always contain their own, smaller, black holes at their cores is still not known.

Black holes on their own can be nearly impossible to find, but if they attract enough matter from their surroundings, they become easier to spot. When gas, dust and other material falls into the black hole, it heats up and triggers the formation of what astronomers call an active galactic nucleus, or AGN.

“It’s pretty amazing,” Pucha said. “DESI will tell us more about the physics of galaxy formation and evolution.”

In large galaxies, active galactic nuclei are among the brightest objects in the known universe. But in smaller galaxies, AGNs can be much fainter and harder to distinguish from newborn stars, Pucha said. The high-quality data taken by DESI can help solve this problem – and its wide reach across the sky will yield more information about the cores of small galaxies than ever before.

Those cores, in turn, will give scientists clues about how bright AGNs formed in the very early universe. Also called quasars, bright AGNs are the focus of research by Jinyi Yang, a Strittmatter Fellow at Steward Observatory, and her colleagues. Her team has already discovered quasars within 1 billion light-years after the Big Bang using early DESI data.

“Combining large sky coverage and incredible sensitivity, DESI will more than double the total number of known distant quasars in just the first two years of its operation,” Yang said. “This will tell us so much more about how black holes form and evolve in the early universe.”

DESI has come a long way to reach this point, with construction on the instrument beginning in 2015. The instrument saw first light in 2019. Then, the pandemic shut down the Nicholas U. Mayall telescope for months, although some work continued remotely. In December 2020, DESI turned its eyes to the sky again to test its operation, and by May 2021, it was ready to start its survey.

Observing with DESI requires precise control of 5,000 tiny robots that position optical fibers on the instrument, ensuring their positions are accurate to within 10 micrometers, or “microns” in astronomy terms.

“Ten microns is tiny,” said physicist Klaus Honscheid of Ohio State University, who was instrumental in designing and constructing the instrument. “It’s less than the thickness of a human hair. And you have to position each robot to collect the light from galaxies billions of light-years away. The success of DESI as an instrument is something to be very proud of.”

DESI’s level of accuracy is needed to accomplish the primary task of the survey: collecting detailed color spectrum images of millions of galaxies across more than a third of the entire sky. By breaking down the light from each galaxy into its spectrum of colors, DESI can determine how much the light has been redshifted – stretched out toward the red end of the spectrum by the expansion of the universe during the billions of years it traveled before reaching Earth. It is those redshifts that let DESI see the depth of the sky.

“There is a lot of beauty to it,” said Julien Guy, a staff scientist at Berkeley Lab. “In the distribution of the galaxies in the 3D map, there are huge clusters, filaments and voids. They’re the biggest structures in the universe. But within them, you find an imprint of the very early universe, and the history of its expansion since then.”

In general, the more red-shifted a galaxy’s spectrum is, the farther away it is. With a 3D map of the cosmos, physicists can chart clusters and superclusters of galaxies. Those structures carry echoes of their initial formation, when they were just ripples in the infant cosmos. By teasing out those echoes, physicists can use DESI’s data to determine the expansion history of the universe.

“Our science goal is to measure the imprint of waves in the primordial plasma,” Guy said. “It’s astounding that we can actually detect the effect of these waves billions of years later, and so soon in our survey.”

Dark energy will ultimately determine the destiny of the universe: Will the cosmos expand forever? Will it collapse onto itself again, in a sort of reverse Big Bang? Or will it rip itself apart? Answering these questions means learning more about how dark energy has behaved in the past – and that’s exactly what DESI is designed to do. And by comparing the universe’s expansion history with its growth history, cosmologists can check whether Einstein’s theory of general relativity holds over immense spans of space and time.

“All this data is just there, and it’s just waiting to be analyzed,” Pucha said. “And then we will find so much amazing stuff about galaxies. For me, that’s exciting.”

The DESI collaboration is honored to be permitted to conduct scientific research on Iolkam Du’ag (Kitt Peak), a mountain with particular significance to the Tohono O’odham Nation.