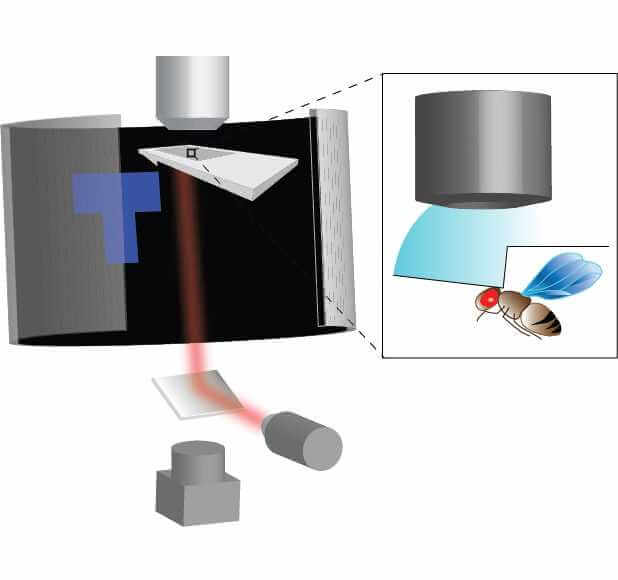 As they annoyingly buzz around a batch of bananas in our kitchens, fruit flies appear to have little in common with mammals. But as a model species for science, researchers are discovering increasing similarities between us and the miniscule fruit-loving insects.

In a new study, researchers at the University of California San Diego’s Kavli Institute for Brain and Mind (KIBM) have found that fruit flies (Drosophila melanogaster) have more advanced cognitive abilities than previously believed. Using a custom-built immersive virtual reality environment, neurogenetic manipulations and in vivo real-time brain-activity imaging, the scientists present new evidence Feb. 16 in the journal Nature of the remarkable links between the cognitive abilities of flies and mammals.

The multi-tiered approach of their investigations found attention, working memory and conscious awareness-like capabilities in fruit flies, cognitive abilities typically only tested in mammals. The researchers were able to watch the formation, distractibility and eventual fading of a memory trace in their tiny brains.

“Despite a lack of obvious anatomical similarity, this research speaks to our everyday cognitive functioning—what we pay attention to and how we do it,” said study senior author Ralph Greenspan, a professor in the UC San Diego Division of Biological Sciences and associate director of KIBM. “Since all brains evolved from a common ancestor, we can draw correspondences between fly and mammalian brain regions based on molecular characteristics and how we store our memories.”

To arrive at the heart of their new findings the researchers created an immersive virtual reality environment to test the fly’s behavior via visual stimulation and coupled the displayed imagery with an infra-red laser as an averse heat stimulus. The near 360-degree panoramic arena allowed Drosophila to flap their wings freely while remaining tethered, and with the virtual reality constantly updating based on their wing movement (analyzed in real-time using high-speed machine-vision cameras) it gave the flies the illusion of flying freely in the world. This gave researchers the ability to train and test flies for conditioning tasks by allowing the insect to orient away from an image associated with the negative heat stimulus and towards a second image not associated with heat.

The researchers also imaged the brain to track calcium activity in real-time using a fluorescent molecule they genetically engineered into their brain cells. This allowed the researchers to record the formation and duration of the fly’s living memory since they saw the trace blinking on and off while being held in the fly’s short-term (working) memory. They also found that a distraction introduced during training—a gentle puff of air—made the visual memory fade more quickly, marking the first time researchers have been able to prove such distractedness in flies and implicating an attentional requirement in memory formation in Drosophila.

“This work demonstrates not only that flies are capable of this higher form of trace conditioning, and that the learning is distractible just like in mammals and humans, but the neural activity underlying these attentional and working memory processes in the fly show remarkable similarity to those in mammals,” said Dhruv Grover, a UC San Diego KIBM research faculty member and lead author of the new study. “This work demonstrates that fruit flies could serve as a powerful model for the study of higher cognitive functions. Simply put, the fly continues to amaze in how smart it really is.”

The scientists also identified the area of the fly’s brain where the memory formed and faded—an area known as the ellipsoid body of the fly’s central complex, a location that corresponds to the cerebral cortex in the human brain.

Further, the research team discovered that the neurochemical dopamine is required for such learning and higher cognitive functions. The data revealed that dopamine reactions increasingly occurred earlier in the learning process, eventually anticipating the coming heat stimulus.

The researchers are now investigating details of how attention is physiologically encoded in the brain. Grover believes the lessons learned from this model system are likely to directly inform our understanding of human cognition strategies and neural disorders that disrupt them, but also contribute to new engineering approaches that lead to performance breakthroughs in artificial intelligence designs.

The coauthors of the study include Dhruv Grover, Jen-Yung Chen, Jiayun Xie, Jinfang Li, Jean-Pierre Changeux and Ralph Greenspan (all affiliated with the UC San Diego Kavli Institute for Brain and Mind, and J.-P. Changeux also a member of the Collège de France).