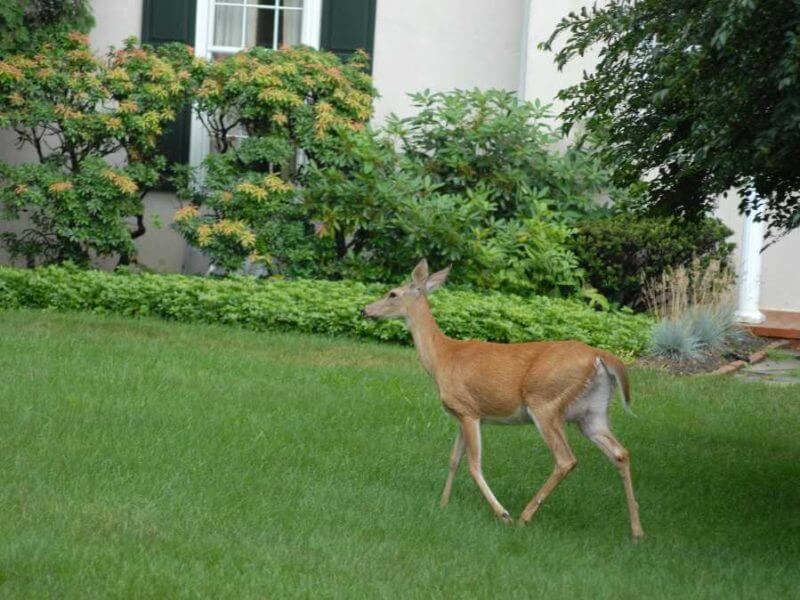 Some white-tailed deer living in Staten Island, New York, are actively infected with the Omicron (B.1.1.529) variant of SARS-CoV-2, according to new research led by scientists at Penn State. The team also found neutralizing antibodies to SARS-CoV-2 in one of the Omicron-infected deer, suggesting that, like humans, deer can be reinfected with the virus.

“The deer population on Staten Island is so large that the animals are considered by local wildlife officials to pose significant challenges to human health and safety, particularly from vehicle collisions and the spread of tick-borne diseases,” said Kurt Vandegrift, associate research professor of biology, Penn State, and lead author of the paper, which published on the pre-print server bioRxiv on Feb. 7. “Our finding that some of these animals harbor SARS-CoV-2 suggests the presence of another potential threat. This is particularly concerning because Staten Island represents a situation where a highly dense human population lives in close proximity to a large population of deer.”

Last fall, Suresh Kuchipudi, Huck Chair in Emerging Infectious Diseases and clinical professor of veterinary and biomedical sciences, Penn State, led a team — including Vandegrift and Kapur, Huck Distinguished Chair in Global Health and professor in the Department of Animal Science at Penn State — that found that up to 80% of white-tailed deer sampled across Iowa tested positive for SARS-CoV-2. The finding was the first direct evidence of SARS-CoV-2 virus in any free-living species.

According to Kuchipudi, the team’s latest research highlights that many urgent steps are needed to monitor the spread of the virus in deer and prevent potential spillback to humans.

“While there is no indication so far of any of the SARS-CoV-2 variants spilling back into humans from deer, such an outcome is possible,” said Kuchipudi. “The longer the virus circulates in these animals and the greater the number of individuals it infects, the more likely the virus is to evolve and potentially lead to the emergence of a completely novel variant that may be resistant to our current vaccines, which would be a serious problem if the virus were to spill back into humans. Our ongoing research in deer may at some point reveal whether spillover back to humans from this animal is possible.”

The team targeted Staten Island because of its close proximity to New York City, where Omicron infection rates at the time were high. The team partnered with scientists at the City of New York Department of Parks and Recreation Wildlife Unit, which is running a population control program for white-tailed deer.

The team analyzed blood samples from 131 individual deer collected between December 12, 2021, and January 31, 2022, and found that 19 were positive for SARS-CoV-2-specific antibodies. The team also detected SARS-CoV-2 nucleic acid in nasal swabs from seven of 68 of the sampled deer, indicating that these deer were actively infected with the virus.

“Our previous research in Iowa examined the lymph nodes of deer that had already been killed during hunting, but we were not able to confirm an active infection from these samples” said Kapur, who helped co-lead the current study. “In our new study, we were able to obtain nasal swabs, which revealed live virus in the animals’ noses.”

Finally, whole-genome sequencing identified that the virus circulating among the white-tailed deer on Staten Island was Omicron. Phylogenetic analyses, which examine the evolutionary history among groups of organisms, revealed that the Omicron sequences in the deer were related to Omicron sequences recovered from infected humans in New York City and elsewhere, suggesting the virus spilled over from humans to deer.

“Importantly, one individual deer was both positive for viral RNA and had a high level of neutralizing antibodies, suggesting that neutralizing antibodies developed rapidly during an ongoing infection or that a breakthrough infection occurred,” said Kuchipudi. “If this animal had a reinfection, then this suggests that white-tailed deer can serve as a reservoir for the virus to continue to mutate, potentially producing new variants that are more dangerous.”

The team’s results also revealed a difference in antibody prevalence between age groups, where a significantly greater proportion of yearling deer, ages 12 to 24 months, possessed neutralizing antibodies than did fawns, which are less than 12 months old.

“Our finding of age-structure in antibody prevalence may help in finetuning future surveillance strategies,” said Vandegrift.