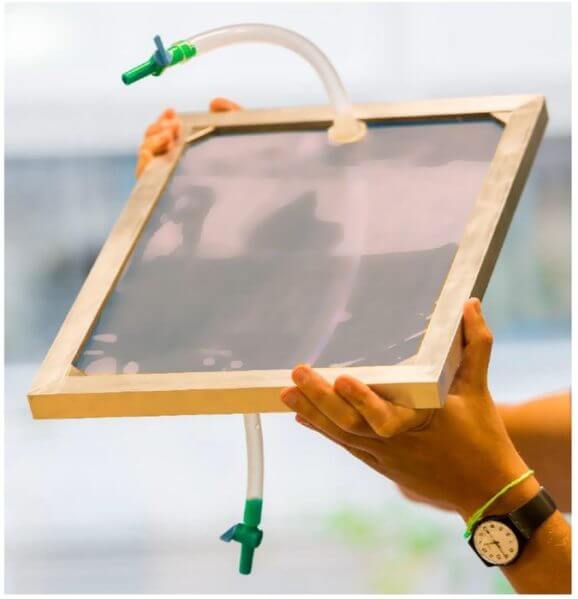 Even today, clean water is a privilege for many people across the world. According to the World Health Organization (WHO), at least 1.8 billion people consume water contaminated with feces, and by 2040, a large portion of the world will endure water stress because of insufficient resources of drinking water. Meanwhile, the United Nations Children’s Fund (UNICEF), around 1,800 children die every day from diarrhea because of unsafe water supply, which causes diseases like cholera.

It has become imperative then that we develop efficient and cost-efficient ways to decontaminate water. And that is exactly what a team of scientists led by László Forró at EPFL have accomplished, with a new water purification filter that combines titanium dioxide (TiO2) nanowires and carbon nanotubes powered by nothing but sunlight.

The scientists first show that the TiO2 nanowires by themselves can efficiently purify water in the presence of sunlight. But interweaving the nanowires with carbon nanotubes forms a composite material that adds an extra layer of decontamination by pasteurizing the water – killing off human pathogens such as bacteria and large viruses.

The idea is that when UV light – from the visible spectrum of sunlight – hits the filter, it causes it to produce a group of molecules called Reactive Oxygen Species (ROS). These include hydrogen peroxide (H2O2), hydroxide (OH), and oxygen (O2-), and are known to be effective pathogen killers.

The researchers tested their device with E. Coli, bacteria, the “gold-standard” for bacterial survival studies, but it should work with other bacteria pathogens, such as Campylobacter Jejuni (a common diarrhea-inducing pathogen in the developed world), Giardia Lamblia (a microorganism that causes the intestinal infection giardiasis), Salmonella, Cryptosporidium (causes diarrheal cryptosporidiosis), the Hepatitis A virus, and Legionella Pneumophila (causes Legionnaires’ disease). The device is exceptionally adept at removing all the pathogens from water, and shows promising results even for eliminating micropollutants, such as pesticides, drug residues, cosmetics etc.

“In a close collaboration between chemists, physicists, and biologists, we have developed a very efficient water purification device, which does not need any energy source but sunlight,” says Forró. “Our prototype can supply clean drinking water even at remote places to small populations and could be easily scaled-up. It is a great achievement and an important “side-product” of this project is that it has attracted a large number of talented and motivated students who care for environmental issues, for sustainability”.

In their paper, published in the Nature partner journal Clean Water, the researchers showcase a prototype of the filter and make suggestions for further improvements. “I am convinced that it will create a strong follow-up in versatile scientific communities and hopefully funding agencies,” says Endre Horváth, the lead scientist on the project.