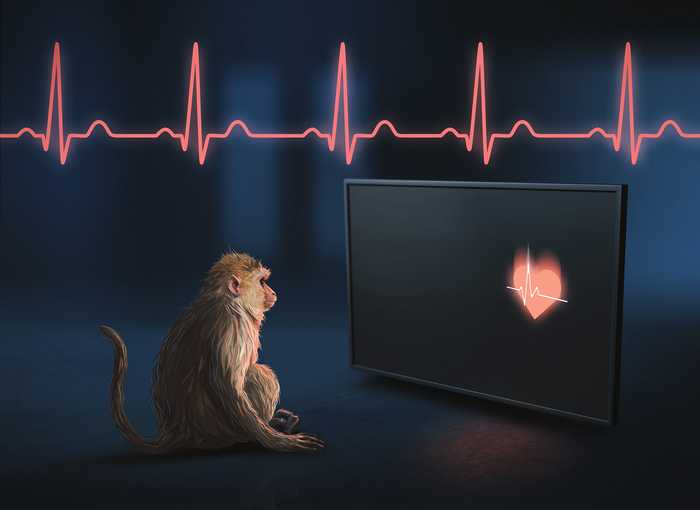 A new study at the California National Primate Research Center shows that rhesus macaques can perceive their own heartbeat. This ability to be aware of internal states is called interoception. Deficits in interception can occur in neuropsychiatric disorders such as depression and Alzheimer’s disease. The discovery could lead to new ways to study such diseases. (Graphic by Matthew Valdolivo/UC Davis Academic Technology Services)

Rhesus macaques are able to perceive their own heartbeats, according to a new study from the California National Primate Research Center at the University of California, Davis, and Royal Holloway, University of London. The research, published April 11 in Proceedings of the National Academy of Sciences creates a first-of-its-kind animal model of interoception. Interoception refers to the ability to sense the internal state of one’s body, such as observing when your heart races or breathing quickens. The findings provide an important model for future psychiatric and neuropsychiatric research as dysfunctions in interoception are associated with anxiety, depression, and Alzheimer’s disease.

The team monitored four rhesus monkeys that sat in front of an infrared eye tracker displaying stimuli which bounced and generated a sound either synchronously or asynchronously (faster and slower) with the monkeys’ heartbeats. Such an experiment capitalizes on the fact that monkeys and human babies look for longer at things that they find surprising or are unexpected.

“Why do we care? Interoception, or the self-monitoring of your physiological systems, is involved in all aspects of human life,” Bliss-Moreau said.

The ability to sense our internal state can indicate issues within the body that require our attention. Impaired interoceptive awareness is associated with less capacity to regulate emotions and increased susceptibility to mental health issues such as anxiety and depression.

“Interoception is hugely important for emotion regulation and mental health in adults, and yet we know very little about how it develops in early infancy or comes to be across evolutionary time,” Tsakiris said. “The work we present here represents a first successful attempt to fill these gaps.”

Deficits in interoception have also been linked to neurodegenerative diseases like Alzheimer’s disease.

“This model will be used in future translational studies of neurodegenerative diseases, including Alzheimer’s,” Bliss-Moreau said. “If we can measure interoception, we can track it as a behavioral biomarker of disease progression.”

The study provides insights into how the rhesus macaque model may be used to further our understanding of brain and body function.

“A next step is to study the mechanism by which interoception may be involved in different psychiatric and neuropsychiatric conditions,” Tsakiris said.

The project was supported by a UC Davis Chancellor’s Fellowship to Bliss-Moreau and grants from the European Research Council and NOMIS Foundation. The California National Primate Research Center is supported by NIH Office of the Director.