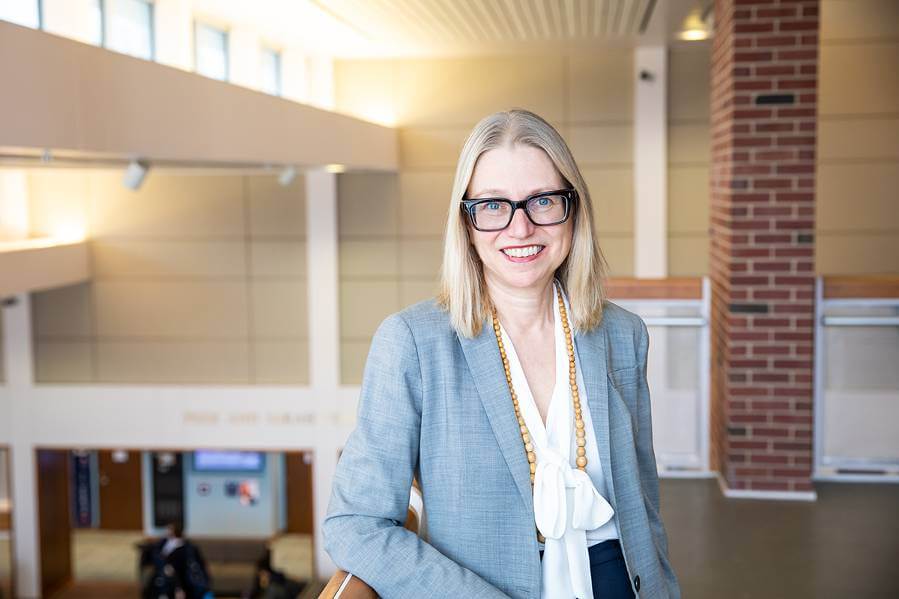 Sanctions imposed against Russia and Belarus as punishment for invading Ukraine have had an effect but may only have meaningful consequences in the longer term, says Taisa Markus, an expert in securities law, cross-border capital markets and corporate finance transactions. Photo by Michelle Hassel

University of Illinois Urbana-Champaign adjunct law professor Taisa Markus is an expert in securities law, cross-border capital markets and corporate finance transactions. She spoke with News Bureau business and law editor Phil Ciciora about the efficacy of international sanctions imposed on Russia in the aftermath of its invasion of Ukraine.

Just how effective have sanctions been against Russia?

The sanctions have had an effect to date but may only have meaningful consequences in the longer term. Sanctions were already imposed on Russia following its annexation of Crimea in 2014, so Russia has had time to prepare for economic pain, including by pivoting toward China.

The sanctions against Russia and Belarus are unprecedented in speed and scope and in the coordinated way they have been imposed. Generally speaking, sanctions may have an economic or political objective. In this case, the objective is political – and the political objective has not been achieved as the aggression and war crimes in Ukraine continue. The Russian retreat from Kyiv and other areas is due to military defeat, not because of sanctions to date.

Historically, it is not the case that sanctions always achieve political objectives. The U.S. embargo on Cuba is an obvious example. However, sanctions are a necessary component of any response to the current situation and will play an important role if imposed adequately and collectively. Sanctions may be even more effective than in past cases given their scope, the interdependence of the global economy, the interconnectedness of the world and instantaneous communications and, interestingly, the self-sanctioning that many large enterprises have voluntarily undertaken.

In the meantime, humanitarian and military assistance is critical, as is an active and strategic campaign to combat disinformation and weaken support for Russian aggression.

Which particular sanction has been the most effective so far?

Cutting Russia off from the global financial community including via exclusion of key entities from the Society for Worldwide Interbank Financial Telecommunications – otherwise known as SWIFT – and freezing Russian foreign reserves have been the most effective sanctions. The result is that any cross-border or hard-currency payments have become extremely difficult and costly for Russia.

Since the invasion started, the Moscow Exchange has yet to resume normal trading operations; numerous Russian companies have been excluded from global indices or delisted from exchanges; the ruble has plummeted, although it has since recovered; and payment systems and banking have been disrupted. A full sovereign default on Russian debt is very likely, and Russian gross domestic product is expected to contract significantly in 2022. Sanctions have played a role in these developments. Export controls on key technology are also likely to have a significant effect.

Sanctioning oligarchs also has had some symbolic value and may threaten Russian President Vladimir Putin’s assets but ultimately doesn’t advance the political objective.

Perversely, the increase in the price of oil since the start of the invasion has benefited the Russian Federation, as oil and gas are the country’s principal exports.

What, if anything, is different this time from previous sanctions against Russia?

The current Russia-Belarus sanctions may be more effective than sanctions imposed for political reasons in the past due to the scope and collective nature and the willingness of the U.S. and allies to inflict pain on the Russian economy.

Other key differentiators are the dependence of Russia on export income from oil and gas; the degree of financial and trade interdependence globally; potential secondary sanctions – that is, sanctioning non-U.S. entities that do business with Russian-Belarus sanctioned persons, which the Biden administration is considering; and self-sanctioning behavior by global companies such as Apple and McDonald’s.

Are there any modern-day analogues to the sanctions Russia is currently under? If so, how effective were they as a deterrent or means of changing behavior?

Sanctions have been commonly utilized since World War II to achieve political goals, typically with limited success. Cuba, Venezuela and Iran are examples where the sanctioning countries have not achieved political goals. The former Soviet Union was under sanctions for decades, but internal politics may have had more of an effect on regime change than sanctions.

On the other hand, sanctions against South Africa arguably did play an important role in the end of apartheid. But there are many important differences between those cases and what’s happening in Russia.

What else can the U.S., EU and other countries do to ramp up the pressure on Moscow?

There is room for existing sanctions to be escalated and for other actions to be taken, such as increasing military and humanitarian assistance.

In terms of sanctions, Europe should ban oil and gas imports from Russia, and the U.S. and other countries should support this effort. Imposing secondary sanctions on entities and persons outside the U.S. and effectively presenting these entities a choice between doing business with Russia or doing business with the U.S. should be explored as a means of further isolating Russia.

In terms of politics, cultivating India, China and Latin America will be important. The U.S. and Europe view this crisis as an existential threat, so it’s important to convey to the leaders of those countries that neutrality may harm their longer-term interests.

Finally, finding ways to maximize the impact of the self-sanctioning behavior of large multinational companies or organizations ought to be explored. Accurate and easily accessible disclosure to consumers on the extent of a company’s presence in Russia should be mandated. Customers can then choose whether to shop at an apparel company such as Zara, which has exited Russia, or at a competitor that has not.

Qualitative and quantitative disclosure to investors in Securities and Exchange Commission filings could be mandated, as well, in the interest of investor protection. Environmental, social and governance funds and other investors would then have more information on which to base investment decisions.