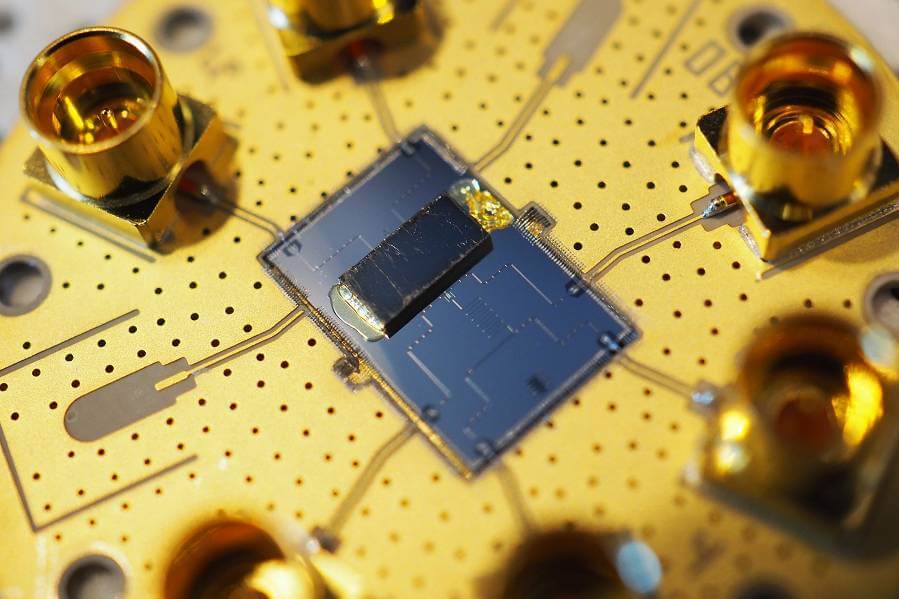 Reliable, compact, durable, and efficient, acoustic devices harness mechanical motion to perform useful tasks. A prime example of such a device is the mechanical oscillator. When displaced by a force – like sound, for instance – components of the device begin moving back-and-forth about their original position. Creating this periodic motion is a handy way to keep time, filter signals, and sense motion in ubiquitous electronics, including phones, computers, and watches.

Researchers have sought to bring the benefits of mechanical systems down into the extremely small scales of the mysterious quantum realm, where atoms delicately interact and behave in counterintuitive ways. Toward this end, Stanford researchers led by Amir Safavi-Naeini have demonstrated new capabilities by coupling tiny nanomechanical oscillators with a type of circuit that can store and process energy in the form of a qubit, or quantum “bit” of information. Using the device’s qubit, the researchers can manipulate the quantum state of mechanical oscillators, generating the kinds of quantum mechanical effects that could someday empower advanced computing and ultraprecise sensing systems.

“With this device, we’ve shown an important next step in trying to build quantum computers and other useful quantum devices based on mechanical systems,” said Safavi-Naeini, an associate professor in the Department of Applied Physics at Stanford’s School of Humanities and Sciences. Safavi-Naeini is senior author of a new study published April 20 in the journal Nature describing the findings. “We’re in essence looking to build ‘mechanical quantum mechanical’ systems,” he said.

The joint first authors of the study, Alex Wollack and Agnetta Cleland, both PhD candidates at Stanford, spearheaded the effort to develop this new mechanics-based quantum hardware. Using the Stanford Nano Shared Facilities on campus, the researchers worked in cleanrooms while outfitted in the body-covering white “bunny suits” worn at semiconductor manufacturing plants in order to prevent impurities from contaminating the sensitive materials in play.

With specialized equipment, Wollack and Cleland fabricated hardware components at nanometer-scale resolutions onto two silicon computer chips. The researchers then adhered the two chips together so the components on the bottom chip faced those on the top half, sandwich-style.

On the bottom chip, Wollack and Cleland fashioned an aluminum superconducting circuit that forms the device’s qubit. Sending microwave pulses into this circuit generates photons (particles of light), which encode a qubit of information in the device. Unlike conventional electrical devices, which store bits as voltages representing either a 0 or a 1, qubits in quantum mechanical devices can also represent weighted combinations of 0 and 1 simultaneously. This is because of the quantum mechanical phenomenon known as superposition, where a quantum system exists in multiple quantum states at once until the system is measured.

“The way reality works at the quantum mechanical level is very different from our macroscopic experience of the world,” said Safavi-Naeini.

The top chip contains two nanomechanical resonators formed by suspended, bridge-like crystal structures just a few tens of nanometers – or billionths of a meter – long. The crystals are made of lithium niobate, a piezoelectric material. Materials with this property can convert an electrical force into motion, which in the case of this device means the electric field conveyed by the qubit photon is converted into a quantum (or a single unit) of vibrational energy called a phonon.

“Just like light waves, which are quantized into photons, sound waves are quantized into ‘particles’ called phonons,” said Cleland, “and by combining energy of these different forms in our device, we create a hybrid quantum technology that harnesses the advantages of both.”

The generation of these phonons allowed each nanomechanical oscillator to act like a register, which is the smallest possible data-holding element in a computer, and with the qubit supplying the data. Like the qubit, the oscillators accordingly can also be in a superposition state – they can be both excited (representing 1) and not excited (representing 0) at the same time. The superconducting circuit enabled the researchers to prepare, read out, and modify the data stored in the registers, conceptually similar to how conventional (non-quantum) computers work.

“The dream is to make a device that works in the same way as silicon computer chips, for example, in your phone or on a thumb drive, where registers store bits,” said Safavi-Naeini. “And while we can’t store quantum bits on a thumb drive just yet, we’re showing the same sort of thing with mechanical resonators.”

Beyond superposition, the connection between the photons and resonators in the device further leveraged another important quantum mechanical phenomenon called entanglement. What makes entangled states so counterintuitive, and also notoriously difficult to create in the lab, is that the information about the state of the system is distributed across a number of components. In these systems, it is possible to know everything about two particles together, but nothing about one of the particles observed individually. Imagine two coins that are flipped in two different places, and that are observed to land as heads or tails randomly with equal probability, but when measurements at the different places are compared, they are always correlated; that is, if one coin lands as tails, the other coin is guaranteed to land as heads.

The manipulation of multiple qubits, all in superposition and entangled, is the one-two punch powering computation and sensing in sought-after quantum-based technologies. “Without superposition and lots of entanglement, you can’t build a quantum computer,” said Safavi-Naeini.

“The bizarreness of quantum mechanics is on full display here,” said Wollack. “Not only does sound come in discrete units, but a single particle of sound can be shared between the two entangled macroscopic objects, each with trillions of atoms moving – or not moving – in concert.”

For eventually performing practical calculations, the period of sustained entanglement, or coherence, would need to be significantly longer – on the order of seconds instead of the fractions of seconds achieved so far. Superposition and entanglement are both highly delicate conditions, vulnerable to even slight disturbances in the form of heat or other energy, and accordingly endow proposed quantum sensing devices with exquisite sensitivity. But Safavi-Naeini and his co-authors believe longer coherence times can be readily achievable by honing the fabrication processes and optimizing the materials involved.

“We’ve improved the performance of our system over the last four years by nearly 10 times every year,” said Safavi-Naeini. “Moving forward, we will continue to make concrete steps toward devising quantum mechanical devices, like computers and sensors, and bring the benefits of mechanical systems into the quantum domain.”

Additional co-authors on the paper include Rachel G. Gruenke, Zhaoyou Wang, and Patricio Arrangoiz-Arriola of the Department of Applied Physics in Stanford’s School of Humanities and Sciences.

The research was funded by the David and Lucile Packard, Stanford Graduate, and Sloan Fellowships. This work was funded by Amazon Inc., U.S. Office of Naval Research, U.S. Department of Energy, National Science Foundation, Army Research Office, and NTT Research.