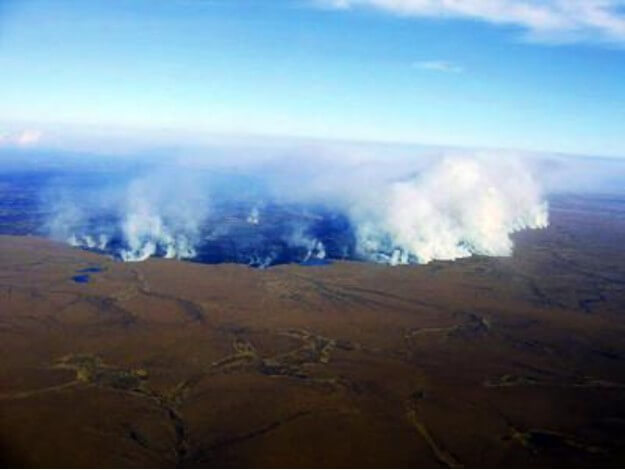 Burning more than 1,000 square kilometers of tundra on Alaska’s North Slope, the 2007 Anaktuvuk river wildfire is one of the largest fires to occur within Arctic ecosystems. Berkeley Lab scientist Nick Bouskill led a study that used data from this disturbance event to predict ecosystem recovery as fires advance in a changing climate. (Credit: Bureau of Land Management)

Greenhouse gas emissions from human activities have caused Earth’s climate to change – and in Arctic regions, air temperatures are warming twice as fast as the global average. Permanently frozen Arctic soils located in tundra ecosystems store approximately twice the amount of carbon currently in the atmosphere. This frozen organic matter is thawing, thus increasing microbial decomposition, which releases carbon dioxide to the atmosphere. Arctic climate change can also lead to more droughts, lower air moisture, and more lightning – all factors that can increase the frequency and intensity of wildfires.

A recent study led by Berkeley Lab scientist Nick Bouskill sought to improve what is known about how these Arctic systems respond to wildfire. The Next Generation Ecosystem Experiments (NGEE) Arctic  project team used environmental modeling to evaluate how these environments recover from wildfires, and how nutrients available in these permafrost soils influence this recovery. Their work showed that over the first five years after the fire, faster-growing bacteria established colonies in areas of the soil that were previously occupied by slower-growing fungi. The study is described in a new paper published in the journal, Communications Earth and Environment.

Bouskill explained, “The onset of wildfire leads to the combustion and loss of carbon from soil and vegetation and the export of soil nutrients to waterways.” Thus, fires are a disturbance to the microbial community because they impact soil conditions. Microbial response to these wildfires can impact soil nutrient cycling, which can influence larger-scale ecosystem recovery.

Using a mathematical ecosystem model, the team simulated how soil carbon and nutrient cycles respond to wildfires in a changing climate, for example with increased temperature and atmospheric carbon dioxide. The model was applied to observations from the 2007 Anaktuvak river fire – one of the largest and most sampled wildfires within Arctic regions. Because of the demonstrated enhanced microbial growth and activity, more nutrients were released into the soil – which allows for better soil quality, and therefore faster recovery of soil carbon and plant communities. These post-fire conditions also encouraged shrubs to grow more rapidly than under warming conditions alone.

The model simulations show that soil nutrients released from microbial activity influence how tundra ecosystems recover from fires. This study advances predictions of how microbes and soil quality may change and respond to a rapidly warming and fire-prone Arctic environment.

NGEE Arctic is supported by the Department of Energy’s Office of Science.