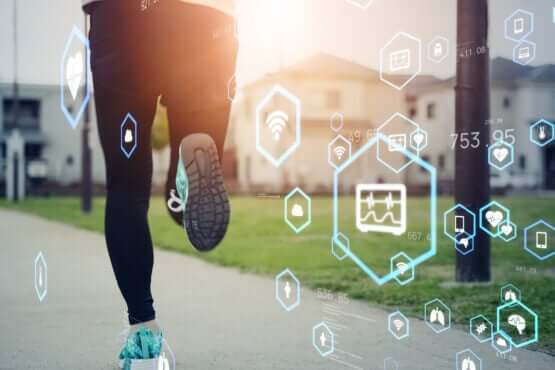 Stanford University scientists have found that when recreational runners are left to their own devices and outfitted with a wearable fitness tracker, they prefer to run at the same calorie-saving pace, regardless of the distance ran – contrary to the explicit goals of competitive racing.

Previously, scientists theorized that runners burn the same amount of calories for a given distance no matter how fast they run because the energetic cost depends mostly on the weight of the runner and time ran. But a new study, published April 28 in Current Biology, helps upend this thinking in favor of a more economical one. With data from more than 4,600 runners totaling more than 28,000 hours of running, researchers compared energy-saving running speeds measured in a lab setting to the preferred, real-world speeds measured by wearable trackers and found the two to be indistinguishable.

“When you go out for a run, you run to have your best fuel economy,” said Scott Delp, the James H. Clark Professor in the School of Engineering and director of the Wu Tsai Human Performance Alliance, who is senior author of the paper. “So, regardless of the distance you travel, you run in such a way that you burn the least amount of fuel per distance traveled.”

Runners in the wild

For this investigation, the researchers gathered data from 26 runners on treadmills and identified the energetically optimal speeds based on their oxygen consumption. They compared this to data collected from thousands of recreational runners outfitted with a waistband tracker from Lumo Run.

Although the data from lab studies may be more consistent and manageable, Jessica Selinger, the study’s lead author who was formerly a Mobilize Center postdoctoral scholar at Stanford and is now an assistant professor at Queen’s University, said that the sheer volume of information made available through wearables is unobtainable in the lab. Wearables can also reveal the choices we make in the real world without the oversight of a researcher or constraints of the lab environment, she added. By fusing the two, a new window has opened up into runners’ behavior.

“Humans are amazing endurance hunters, so to see how modern-day humans run when they’re in the wild is a really interesting window into how our physiology is tuned, over millennia, to enable us to move over such long distances,” said Delp, who is also a professor of bioengineering and of mechanical engineering.

We are not alone

From an evolutionary point of view, energy minimization is considered optimal, to the point that it’s done across the animal kingdom.

“Minimizing energy expenditure has evolutionary advantages – it allows us to move farther on fewer calories. We share this trait with other animals, be it flying birds, swimming fish, or galloping horses – there’s evidence that we all move in calorie conserving ways out in the wild,” said Selinger.

Even if runners are not food-deprived, they still act like their evolutionary history constrains them. Running requires more energy than swimming, flying, or walking, and for humans, running requires twice the energy than that found in other comparably-sized mammals.

Regardless of speed, running and other physical activities have numerous benefits such as building muscular strength and bone density, and the study’s researchers emphasize that runners are more likely to achieve these at the energy optimum, or above. Given that this research suggests people are inclined to stay at this optimum, Delp said that trainers could personalize an individual’s training by finding their energy optimal speed and then pushing above that. At those speeds, runners will see more weight loss and endurance gains. Jennifer Hicks, deputy director of Stanford’s Wu Tsai Human Performance Alliance and co-author of the paper, recommends using music or a running partner to increase your speed.

Hicks refers to the algorithms wearable devices use as a “black box” and notes that they don’t always accurately reflect calories burnt. If these algorithms are working off the assumption that scientists have had – that the same energy per unit distance is consumed at different speeds – she hopes they can, instead, incorporate this study’s findings.

By applying useable data from wearables, and perhaps improving wearables by adjusting algorithms according to research results, the researchers envision expansive ways to enable fitness based on natural, “free-living” human behavior.

“We’re just starting to scratch the surface of what we can learn from wearable data,” said Hicks. “As a runner and researcher, in the future, I’m interested in layering this data with information about weather and the built environment to better understand how we can improve city planning to help people become more active.”

Stanford postdoctoral scholar Rachel Jackson, is a co-author of this research. Additional co-authors of this work are from Seattle Pacific University and Lumo Bodytech, Inc. Delp is also a member of Stanford Bio-X, Maternal & Child Health Research Institute (MCHRI), and the Wu Tsai Neurosciences Institute.

This work was funded by the Natural Sciences and Engineering Research Council of Canada, the National Institutes of Health, the Wu Tsai Human Performance Alliance, and the Joe and Clara Tsai Foundation.