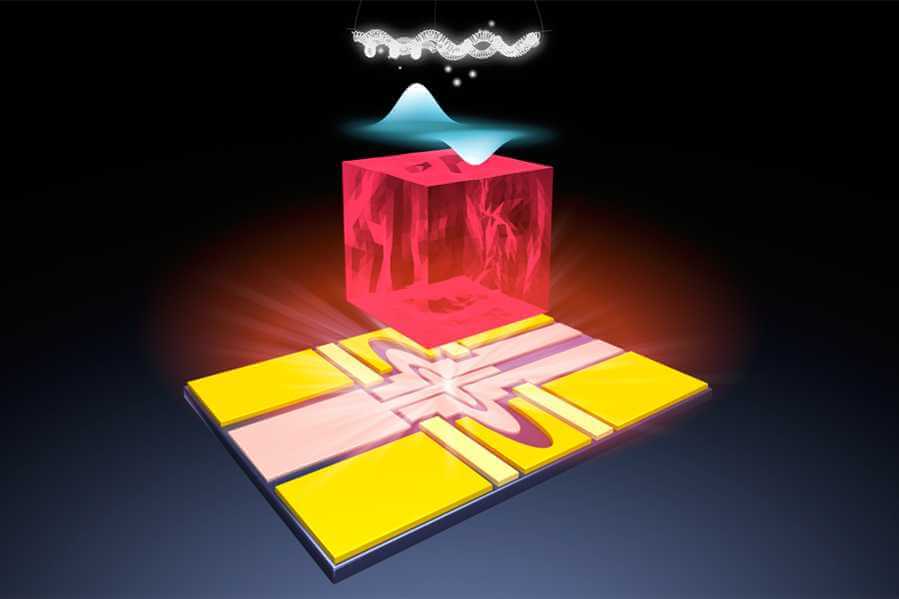 An illustration of the qubit platform made of a single electron on solid neon. Researchers froze neon gas into a solid at very low temperatures, sprayed electrons from a light bulb onto the solid and trapped a single electron there to create a qubit. (Courtesy of Dafei Jin/Argonne National Laboratory)

You are no doubt viewing this article on a digital device whose basic unit of information is the bit, either 0 or 1. Scientists worldwide are racing to develop a new kind of computer based on the use of quantum bits, or qubits, which can simultaneously be 0 and 1 and could one day solve complex problems beyond any classical supercomputers.

A team led by researchers at the U.S. Department of Energy’s (DOE) Argonne National Laboratory, in close collaboration with FAMU-FSU College of Engineering Associate Professor of Mechanical Engineering Wei Guo, has announced the creation of a new qubit platform that shows great promise to be developed into future quantum computers. Their work is published in Nature.

“Quantum computers could be a revolutionary tool for performing calculations that are practically impossible for classical computers, but there is still work to do to make them reality,” said Guo, a paper co-author. “With this research, we think we have a breakthrough that goes a long way toward making qubits that help realize this technology’s potential.”

The team created its qubit by freezing neon gas into a solid at very low temperatures, spraying electrons from a light bulb onto the solid and trapping a single electron there.

While there are many choices of qubit types, the team chose the simplest one — a single electron. Heating up a simple light filament such as you might find in a child’s toy can easily shoot out a boundless supply of electrons.

One important quality for qubits is their ability to remain in a simultaneous 0 or 1 state for a long time,  known as its “coherence time.” That time is limited, and the limit is determined by the way qubits interact with their environment. Defects in the qubit system can significantly reduce the coherence time.

For that reason, the team chose to trap an electron on an ultrapure solid neon surface in a vacuum. Neon is one of only six inert elements, meaning it does not react with other elements.

“Because of this inertness, solid neon can serve as the cleanest possible solid in a vacuum to host and protect any qubits from being disrupted,” said Dafei Jin, an Argonne scientist and the principal investigator of the project.

By using a chip-scale superconducting resonator — like a miniature microwave oven — the team was able to manipulate the trapped electrons, allowing them to read and store information from the qubit, thus making it useful for use in future quantum computers.

Previous research used liquid helium as the medium for holding electrons. That material was easy to make free of defects, but vibrations of the liquid-free surface could easily disturb the electron state and hence compromise the performance of the qubit.

Solid neon offers a material with few defects that doesn’t vibrate like liquid helium. After building their platform, the team performed real-time qubit operations using microwave photons on a trapped electron and characterized its quantum properties. These tests demonstrated that solid neon provided a robust environment for the electron with very low electric noise to disturb it. Most importantly, the qubit attained coherence times in the quantum state competitive with other state-of-the-art qubits.

The simplicity of the qubit platform should also lend itself to simple, low-cost manufacturing, Jin said.

The promise of quantum computing lies in the ability of this next-generation technology to calculate certain problems much faster than classical computers. Researchers aim to combine long coherence times with the ability of multiple qubits to link together — known as entanglement. Quantum computers thereby could find the answers to problems that would take a classical computer many years to resolve.

Consider a problem where researchers want to find the lowest energy configuration of a protein made of many amino acids. These amino acids can fold in trillions of ways that no classical computer has the memory to handle. With quantum computing, one can use entangled qubits to create a superposition of all folding configurations — providing the ability to check all possible answers at the same time and solve the problem more efficiently.

“Researchers would just need to do one calculation, instead of trying trillions of possible configurations,” Guo said.

The team published its findings in a Nature article titled “Single electrons on solid neon as a solid-state qubit platform.” In addition to Jin, Argonne contributors include first author Xianjing Zhou, Xufeng Zhang, Xu Han, Xinhao Li and Ralu Divan. Contributors from the University of Chicago were David Schuster and Brennan Dizdar. Other co-authors were Kater Murch of Washington University in St. Louis, Gerwin Koolstra of Lawrence Berkeley National Laboratory and Ge Yang of Massachusetts Institute of Technology.

Funding for the Argonne research primarily came from the DOE Office of Basic Energy Sciences, Argonne’s Laboratory Directed Research and Development program and the Julian Schwinger Foundation for Physics Research. Guo is supported by the National Science Foundation and the National High Magnetic Field Laboratory.