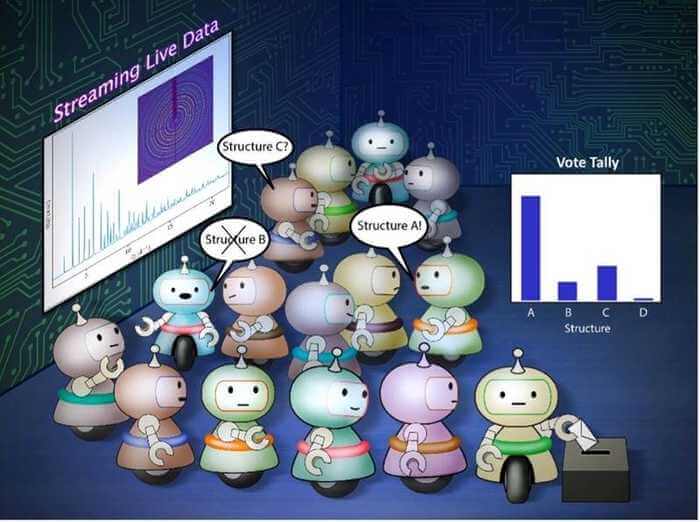 An ensemble of AI agents observes streaming X-ray data, argues amongst themselves, and votes to establish both classification and uncertainty in the prediction. This offers an educated guess about the atomic structure of the material being analyzed.

XRD uses the shifting of X-rays to peer inside the structure of matter. The new approach, called the X-ray Crystallography companion Agent (XCA), assembles a group of AIs that debate each other while analyzing live-streaming X-ray data. The goal is to identify the atomic structure of the material being characterized with the X-rays. Each AI gets to ‘vote’ based on its own analysis. However, the AIs can slightly influence each other. Once the AIs cast their final votes, the XCA approach uses the vote tally to interpret what the most likely atomic structure is and to suggest how confident the researchers should be of the AI analysis.

With ever-growing rates of data collection, the speed at which scientists can analyze that data often lags behind. That’s particularly true at world-class facilities like the Department of Energy’s (DOE) X-ray light source user facilities. In this study, a team of scientists developed a new method of AI-powered autonomous data analysis that can keep pace with today’s data collection rates. Unlike many other AI approaches in this field, this novel ‘ensemble voting’ approach provides both predictions and uncertainties. In effect, this makes the approach a digital expert in XRD analysis. This approach demonstrates how AI and human researchers can work together to address pressing scientific challenges.

To develop new materials, such as better batteries“>batteries, more cost-effective catalysts“>catalysts, or new pharmaceuticals, scientists first need to understand a material’s inner atomic makeup. X-ray diffraction (XRD) is a standard measurement to probe the atomic structure of materials. Unfortunately, analysis of XRD can be difficult and time consuming. In this study, a team of researchers from Brookhaven National Laboratory (BNL), the University of Liverpool, and Ruhr University Bochum developed a new AI agent called the X-ray Crystallography companion Agent that assists scientists by classifying XRD patterns automatically during measurements.

XCA uses a collection of individual AIs—an ensemble—that are trained quasi-independently of each other. Each agent has a slightly different weighting within its neural network, an AI’s mathematical brain. When presented data, each AI votes based on its own interpretation and analysis. Consensus among the ensemble implies confidence in the results, as differing viewpoints still result in a common conclusion. However, strong disagreement can suggest that the analysis was poorly posed, and the researchers should re-examine their assumptions. The study found that XCA can classify the materials as effectively as a human expert, but in fractions of a second. This advancement will accelerate research in many areas, leading to faster discoveries in energy technologies, climate change, and human health.

This research used beamline 28-ID-1 (PDF) at the National Synchrotron Light Source II, a DOE Office of Science user facility located at BNL. Funding for the research was also provided by a BNL Laboratory Directed Research and Development project, the Engineering and Physical Sciences Research Council, the Leverhulme Trust via the Leverhulme Research Centre for Functional Materials Design, and the German Research Foundation.