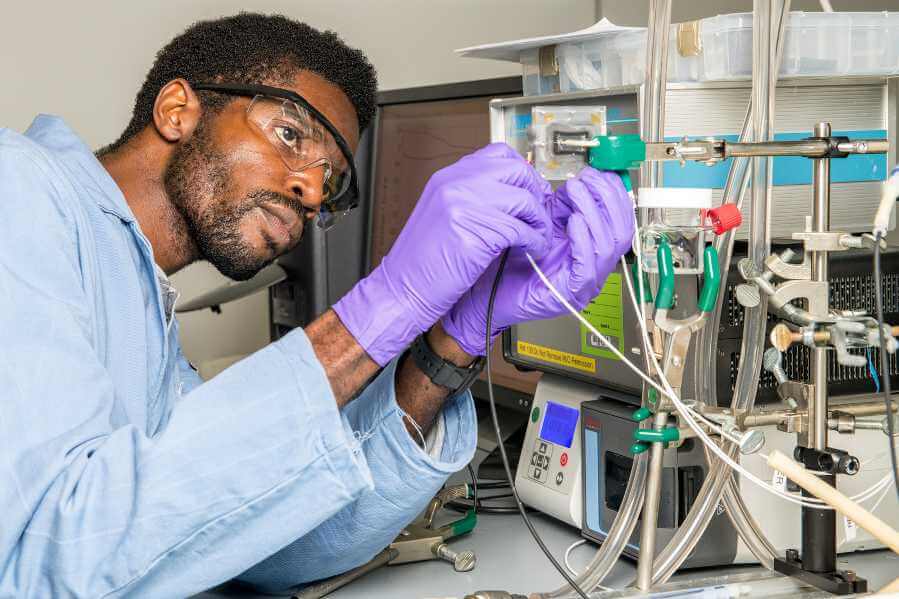 You may be familiar with direct air capture, or DAC, in which carbon dioxide is removed from the atmosphere in an effort to slow the effects of climate change. Now a scientist at Lawrence Berkeley National Laboratory (Berkeley Lab) has proposed a scheme for direct ocean capture. Removing CO2 from the oceans will enable them to continue to do their job of absorbing excess CO2 from the atmosphere.

Experts mostly agree that combating climate change will take more than halting emissions of climate-warming gases. We must also remove the carbon dioxide and other greenhouse gases that have already been emitted, to the tune of gigatons of CO2 removed each year by 2050 in order to achieve net zero emissions. The oceans contain significantly more CO2 than the atmosphere and have been acting as an important carbon sink for our planet.

Q. Can you explain how you envision your technology to work?

It turns out that the bottleneck in the conversion of CO2 to these magnesium and calcium carbonates in seawater is a process that is naturally catalyzed by an enzyme called carbonic anhydrase. It’s not important to know the enzyme name; it’s just important to know that when you add carbonic anhydrase to this seawater mixture, you can basically accelerate the conversion of CO2 to these limestones under suitable conditions.

And so the idea is to scale this up – drawing CO2 out of the atmosphere into the ocean and ultimately into some limestone product that you could sequester.

Q. Fascinating. So you want to turn carbon dioxide into rock using a process that occurs naturally in seawater, but accelerating it. This sounds almost like science fiction. What are the challenges in getting this to work?

To absorb CO2 from the air quick enough for the technology to work, you have to solve the problem of how to provide enough of this enzyme that you could deploy this process at a meaningful scale. If we were to simply try to supply the enzyme as a pure product, you couldn’t do it in an economically viable way. So the question I’m trying to answer here is, how would you do this? You also have to find ways of stabilizing the pH and mixing in enough air to raise and maintain your CO2 concentration in water.

The solution that occurred to me was, okay, given that we know carbonic anhydrase is a protein, and proteins are naturally synthesized by biochemical systems, such as bacteria, which we can manipulate, then we could take bacteria and then engineer them to make carbonic anhydrase for us. And you can just keep growing these bacteria as long as you feed them. One problem, though, is that now you’ve shifted the cost burden onto supplying enough food to produce enough bacteria to produce enough enzyme.

One way around this issue would be to use bacteria that can grow using energy and nutrients that are readily available in the natural environment. So this pointed towards photosynthetic bacteria. They can use sunlight as their energy source, and they can also use CO2 as their carbon source to feed on. And certain photosynthetic bacteria can also use the minerals that naturally occur in seawater essentially as vitamins.

Q. Interesting. So the path to capturing excess CO2 lays in being able to engineer a microbe?

Potentially one way, yes. What I’ve been working on in this project is to develop a genetically modified bacterium that is photosynthetic and is engineered to produce a lot of carbon anhydrase on its surface. Then, if you were to put it in seawater, where you have a lot of magnesium and calcium, and also CO2 present, you would see a rapid formation of limestone. That’s the basic idea.

It’s a small project for now, so I decided to focus on getting the engineered organism. Right now, I’m simply trying to develop the primary catalyst system, which are the enzyme-modified bacteria to drive the mineralization. The other non-trivial pieces of this approach – how to appropriately design the reactor to stabilize CO2 concentrations and pH needed for this scheme to work – are future challenges. But I’ve been using simulations to inform my approaches to those problems.

It’s a fun project because on any given day my co-PIs and I could be doing either physical electrochemistry or gene manipulation in the lab.

Q. How would this look once it’s scaled up? And how much carbon would it be able to sequester?

What I have envisioned is, the bacterium would be grown in a plant-scaled bioreactor. You basically flow seawater into this bioreactor while actively mixing in air, and it processes the seawater, converting it to limestone. Ideally, you probably have some type of downstream centrifugation process to extract the solids, which maybe could be driven by the flow of water itself, which then helps to pull out the limestone carbonates before you then eject the depleted seawater. An alternative that could possibly resolve the pH constraints of mineralization would be to implement this instead as a reversible process, where you also use the enzyme to reconvert the carbon you’ve captured in seawater back to a more concentrated CO2 stream (carbonic anhydrase behavior is reversible).

What I’ve calculated for this system, assuming that the protein carbonic anhydrase behaves on the bacterial surface, more or less, the way it does in free solution, would suggest that you would need a plant that has only about a 1-million-liter volume, which is actually quite small. One of those could get you to roughly 1 megaton of CO2 captured per year. A lot of assumptions are built into that sort of estimate though, and it’s likely to change as work advances.

Erecting 1,000 such facilities globally, which is a small number compared to the 14,000 water treatment facilities in the United States alone, would permit the annual, gigaton-scale capture of atmospheric CO2.