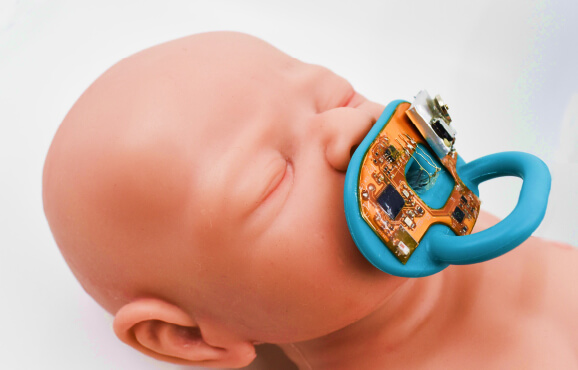 A wireless, bioelectronic pacifier could eliminate the need for invasive blood draws.

This smart pacifier can also provide more continuous monitoring of sodium and potassium ion levels. These electrolytes help alert caregivers if babies are dehydrated, a danger for infants, especially those born prematurely or with other health issues.

Researchers tested the smart pacifier on a selection of infants in a hospital, and the results were comparable to data gained from their normal blood draws. They detailed their findings in a proof-of-concept study published in the journal Biosensors and Bioelectronics.

“We know that premature babies have a better chance of survival if they get a high quality of care in the first month of birth,” said Jong-Hoon Kim, associate professor at the Washington State University School of Engineering and Computer Science and a co-corresponding author on the study. “Normally, in a hospital environment, they draw blood from the baby twice a day, so they just get two data points. This device is a non-invasive way to provide real-time monitoring of the electrolyte concentration of babies.”

The blood-draw method can be potentially painful for the infant, and it leaves big gaps in information since they are usually done once in the morning and once in the evening, Kim pointed out. Other methods have been developed to test an infants’ saliva for these electrolytes, but they involve bulky, rigid devices that require a separate sample collection.

Using a common, commercially available pacifier, the researchers created a system that samples a baby’s saliva through microfluidic channels. Whenever the baby has the pacifier in their mouth, saliva is naturally attracted to these channels, so the device doesn’t require any kind of pumping system.

The channels have small sensors inside that measure the sodium and potassium ion concentrations in the saliva. Then this data is relayed wirelessly using Bluetooth to the caregiver.

For the next step of development, the research team plans to make the components more affordable and recyclable. Then, they will work to set up a larger test of the smart pacifier to establish its efficacy.

Kim said development of this device is part of a broader effort to help make NICU treatment less disruptive for their tiny patients.

“You often see NICU pictures where babies are hooked up to a bunch of wires to check their health conditions such as their heart rate, the respiratory rate, body temperature, and blood pressure,” said Kim. “We want to get rid of those wires.”

Along with Kim, co-authors on this study include researchers from Georgia Institute of Technology, Pukyong National University and Yonsei University College of Medicine in South Korea as well as WSU.