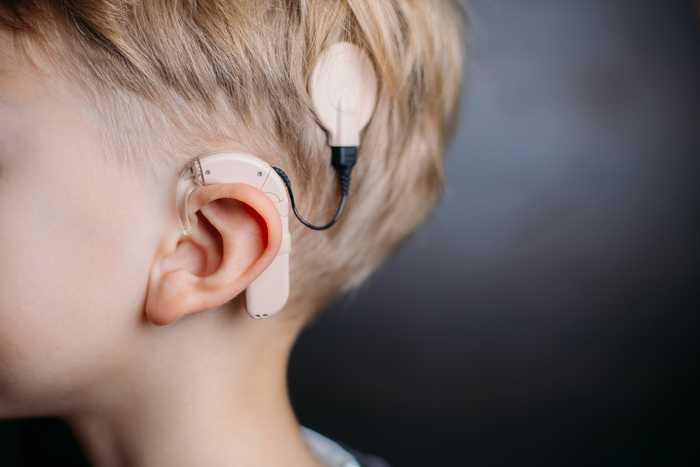 Up to three out of every 1,000 infants in the United States are born with profound hearing loss.

Typically, infants with hearing loss are first treated with hearing aids, and if these fail to help them develop early language and speech skills, they then become eligible for cochlear implants at 12 months or older. Cochlear implants — considered the gold standard of treatment — are small, electronic devices surgically placed under the skin that stimulate nerve endings in the ear to provide a sense of sound.

However, some insurance companies have traditionally denied coverage of cochlear implants to deaf children with severe developmental delays (such as low cognitive skills and low adaptive, or learned, behavior), under the belief that the implants will not help them learn to communicate.

Now, a new study from Keck Medicine of USC has found that infants with hearing loss and severe developmental delays are better served with cochlear implants than hearing aids.

“We demonstrated that cochlear implants improve the skills of deaf children with early developmental impairment across the board in every skill tested — cognitive, adaptive behavior, language and auditory” said John Oghalai, MD, an otolaryngologist with Keck Medicine, chair of the USC Caruso Department of Otolaryngology – Head and Neck Surgery and lead author of the study.

Children were given a baseline assessment in cognition, adaptive behavior, language and auditory skills. (Auditory skills are the ability to notice, compare and distinguish sounds in words.) Some were identified as having learning delays.

All infants began the study wearing hearing aids. From the approximately 200 children enrolled in the study, researchers identified and compared the progress of children who continued to use hearing aids and those who received cochlear implants.

Researchers gave the children repeated evaluations over the next few years. By the time of the final assessment, those with cochlear implants — including children with learning delays — showed up to almost 25% more improvement in the tracked skills than those using hearing aids.

“This study demonstrates that deaf children with developmental impairment should not be overlooked in getting cochlear implants,” Oghalai said. “Cochlear implantation should be considered regardless of the presence of learning delays so all children can develop to their maximum potential.”

Over the course of the study, more insurance providers began covering cochlear implants for deaf children, regardless of developmental impairments. However, according to Oghalai, some insurance providers, as well as some pediatricians and cochlear implant teams, are still unwilling or slow to provide implants to children with developmental delays.

The study was led by the USC Caruso Family Center for Childhood Communication and supported by the National Institutes of Health under award R01DC010075.