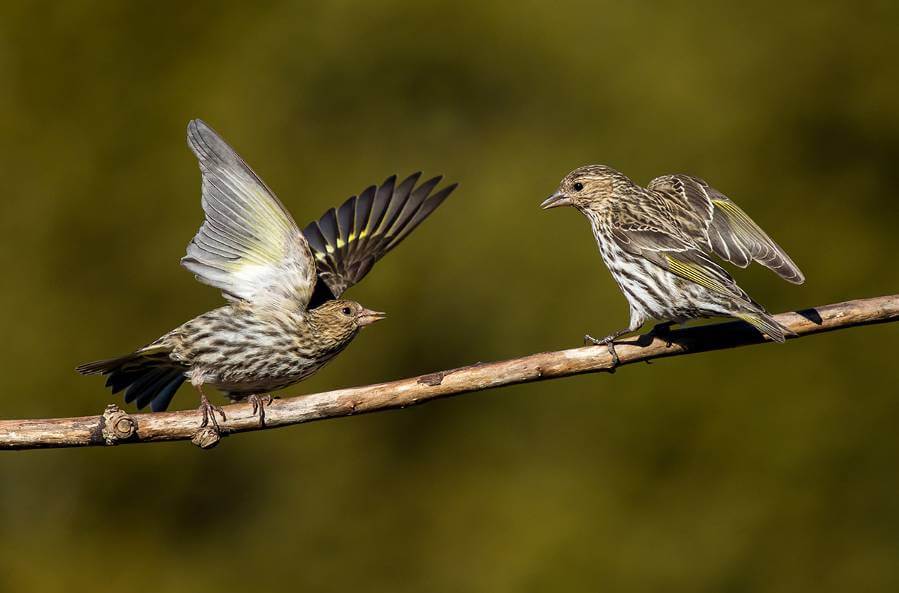 Pine siskins are nomadic migratory birds who appear to take social cues from other birds when deciding to stop migrating. Photo by RT-Images on iStock.

Birds of a feather not only flock together but also appear to settle down together.

A study of nomadic pine siskins, a type of finch often seen on backyard feeders, found that when male migratory siskins were paired with a settled male bird in captivity, they started exhibiting signs of ending migration too. They stopped restless flying and lost body mass, fat stores and muscle size, compared to a control group placed in solo enclosures.

“The presence of another bird that isn’t migratory seems to be a really potent cue to stop migration,” said Heather Watts, a Washington State University behavioral ecologist and corresponding author on the study published in Biology Letters. “We saw changes in their behavior and changes in their physiology associated with the energetics of migration.”

Why pine siskins decide to stop migrating may also give clues to other animals’ nomadic behavior.

“It’s long been thought that social cues or information may be important to not just nomadic birds but to other nomadic animals as well,” she said. “We suspect this is probably a more general phenomenon—that other animals’ attention to social cues may be important in migratory decisions for a whole variety of species.”

The migration of birds and other animals impact ecosystems across the globe, with potential effects for agriculture and disease transmission, Watts said. Some well-known migrating animals have predictable patterns, like geese and Monarch butterflies that travel to the same breeding and wintering areas each year. Not much is known about how the unpredictable nomads, like the pine siskins, choose their destinations.

Yet, just because pine siskins are unpredictable, doesn’t mean they don’t travel far.

“A bird that was banded in Pennsylvania might be found in Washington state the next year, so they’re traveling on the order of the continent,” Watts said.

Studies of migrating pine siskins in captivity have shown they exhibit “nocturnal migratory restlessness.” This means the birds tend to move around a lot at night—jumping, flying, flapping their wings rapidly—at a time they would normally be resting. The birds also gain muscle and put on large deposits of fat to use as fuel in flight which increases their body mass in preparation for migration.

In this study, researchers captured a sample of 44 male pine siskins birds from across the Western U.S. Near the end of the spring migrating season, researchers divided the birds up into migratory and non-migratory birds, placing half of each group in pairings of migratory and non-migratory male birds and keeping the other half as controls. The researchers paired birds of the same sex to eliminate potential influence of breeding cues on the decision to end migration.

The migratory birds placed with more settled birds lost much of their nocturnal restlessness and their body mass, indicating that they were responding to signals to stop migrating. The solo migratory birds in the control group continued to display behaviors and physical signs related to migration.

Many nomadic animals depend on food sources that are variable, which may explain some of their unpredictable migrating patterns, Watts said. For instance, owls have been known to follow boom and bust cycles of rodents. Birds that depend on conifer seeds like pine siskins are probably following the variable “masts” or blooms of conifer seeds since those trees don’t produce seeds every year. They also may be looking to other animals to determine where to land.

“We think these animals probably rely on local cues to assess whether an area is potentially a good site or not,” said Watts. “One type of cue comes from other individuals–if these birds come into an area where there are already birds settled that might tell them it’s a good place to stop.”

This also may be why backyard birders notice that pine siskins suddenly swarm or disappear completely from their feeders, she said.