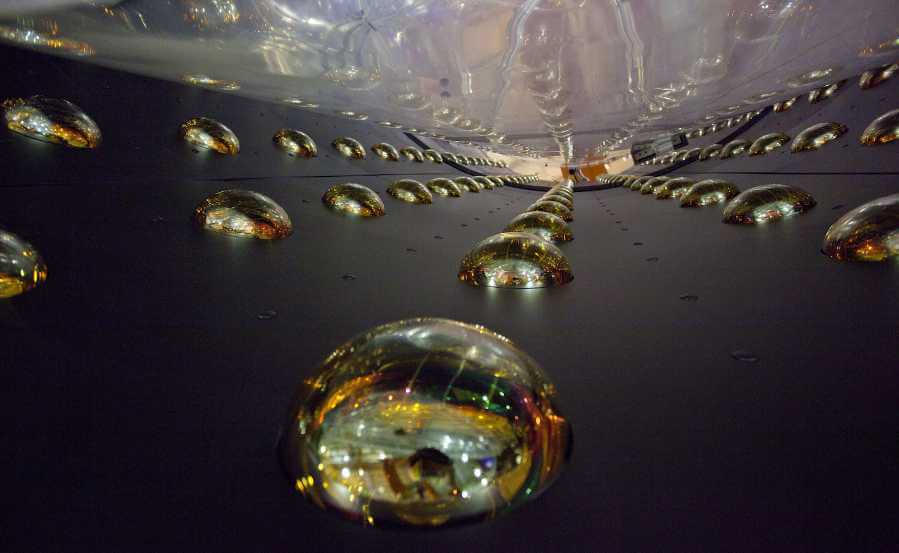 Photomultiplier tubes, designed to pick up faint light signals from particle interactions, line the inside of a detector for the Daya Bay Reactor Neutrino experiment. (Credit: Roy Kaltschmidt/Berkeley Lab)

Over nearly nine years, the Daya Bay Reactor Neutrino Experiment captured an unprecedented five and a half million interactions from subatomic particles called neutrinos. Now, the international team of physicists of the Daya Bay collaboration has reported the first result from the experiment’s full dataset—the most precise measurement yet of theta13, a key parameter for understanding how neutrinos change their “flavor.” The result, announced today at the Neutrino 2022 conference in Seoul, South Korea, will help physicists explore some of the biggest mysteries surrounding the nature of matter and the universe.

Neutrinos are subatomic particles that are both famously elusive and tremendously abundant. They endlessly bombard every inch of Earth’s surface at nearly the speed of light, but rarely interact with matter. They can travel through a lightyear’s worth of lead without ever disturbing a single atom.

One of the defining characteristics of these ghost-like particles is their ability to oscillate between three distinct “flavors”: muon neutrino, tau neutrino, and electron neutrino. The Daya Bay Reactor Neutrino Experiment was designed to investigate the properties that dictate the probability of those oscillations, or what are known as mixing angles and mass splittings.

Only one of the three mixing angles remained unknown at the time Daya Bay was designed in 2007: theta13. So, Daya Bay was built to measure theta13* with higher sensitivity than any other experiment.

Operating in Guangdong, China, Daya Bay Reactor Neutrino Experiment consists of large, cylindrical particle detectors immersed in pools of water in three underground caverns. The eight detectors pick up light signals generated by antineutrinos streaming from nearby nuclear power plants. Antineutrinos are the antiparticles of neutrinos, and they are produced in abundance by nuclear reactors. Daya Bay was built through an international effort and a first-of-its-kind partnership for a major physics project between China and the United States. The Beijing-based Institute of High Energy Physics (IHEP) of the Chinese Academy of Sciences leads China’s role in the collaboration, while the U.S. Department of Energy’s (DOE) Lawrence Berkeley National Laboratory (Berkeley Lab) and Brookhaven National Laboratory co-lead U.S. participation.

Daya Bay physicists made the world’s first conclusive measurement of theta13 in 2012 and subsequently improved upon the measurement’s precision as the experiment continued taking data. Now, after nine years of operation and the end of data collection in December 2020, excellent detector performance, and dedicated data analysis, Daya Bay has far exceeded expectations. Working with the complete dataset, physicists have now measured the value of theta13 with a precision two and a half times greater than the experiment’s design goal. No other existing or planned experiment is expected to reach such an exquisite level of precision.

“We had multiple analysis teams that painstakingly scrutinized the entire dataset, carefully taking into account the evolution of detector performance over the nine years of operation,” said Daya Bay co-spokesperson Jun Cao of IHEP. “The teams took advantage of the large dataset not only to refine the selection of antineutrino events but also to improve the determination of backgrounds. This dedicated effort allowed us to reach an unrivaled level of precision.”

Berkeley Lab postdoctoral fellow Matt Kramer led one of these analyses. The precision measurement of theta13 will enable physicists to more easily measure other parameters in neutrino physics, as well as develop more accurate models of subatomic particles and how they interact.

By investigating the properties and interactions of antineutrinos, physicists may gain insight into the imbalance of matter and antimatter in the universe. Physicists believe that matter and antimatter were created in equal amounts at the time of the Big Bang. But if that were the case, these two opposites should have annihilated, leaving behind only light. Some difference between the two must have tipped the balance to explain the preponderance of matter (and lack of antimatter) in the universe today.

“We expect there might be some difference between neutrinos and antineutrinos,” said Daya Bay co-spokesperson Kam-Biu Luk, a former Berkeley Lab faculty senior scientist, and now Berkeley Lab affiliate, and UC Berkeley physics professor. “We’ve never detected differences between particles and antiparticles for leptons, the type of particles that includes neutrinos. We’ve only detected differences between particles and antiparticles for quarks. But the differences we see with the quarks aren’t enough to explain why there’s more matter than antimatter in the universe. It’s possible that neutrinos might be the smoking gun.”

The latest analysis of Daya Bay’s final dataset also provided physicists with a precise measurement of the mass splitting. This property dictates the frequency of neutrino oscillations.

“The measurement of mass splitting was not one of Daya Bay’s original design goals, but it became accessible thanks to the relatively large value of theta13,” Luk said. “We measured the mass splitting to 2.3% with the final Daya Bay dataset, an improvement over the 2.8% precision of the previous Daya Bay measurement.”

Next-generation neutrino experiments, such as the Deep Underground Neutrino Experiment (DUNE), will leverage the Daya Bay results to precisely measure and compare properties of neutrinos and antineutrinos. Currently under construction, DUNE will provide physicists with the world’s most intense neutrino beam, underground detectors separated by 800 miles, and the opportunity to study the behavior of neutrinos like never before.

“As one of many physics goals, DUNE expects to eventually measure theta13 almost as precisely as Daya Bay,” said Brookhaven experimental physicist and Day Bay collaborator Elizabeth Worcester. “This is exciting because we will then have precise theta13 measurements from different oscillation channels, which will rigorously test the three-neutrino model. Until DUNE reaches that high precision, we can use Daya Bay’s precise theta13 measurement as a constraint to enable the search for differences between neutrino and antineutrino properties.”

Scientists will also leverage the large theta13 value and reactor neutrinos to determine which of the three neutrinos is the lightest. “The precise theta13 measurement of Daya Bay improves the mass-ordering sensitivity of the Jiangmen Underground Neutrino Observatory (JUNO), which will complete construction in China next year,” said Yifang Wang, JUNO spokesperson and IHEP director. “Furthermore, JUNO will achieve sub-percent level precision on the mass splitting measured by Daya Bay in several years.”

The Daya Bay Reactor Neutrino experiment is supported by the Ministry of Science and Technology of China, the DOE Office of Science High Energy Physics program, the Chinese Academy of Sciences, the National Natural Science Foundation of China, and other funding agencies. The Daya Bay collaboration has 237 participants at 42 institutions in Asia, Europe, and North America.

*Physicists measure theta13 in terms of its oscillation amplitude, or what is mathematically written as sin22q13.