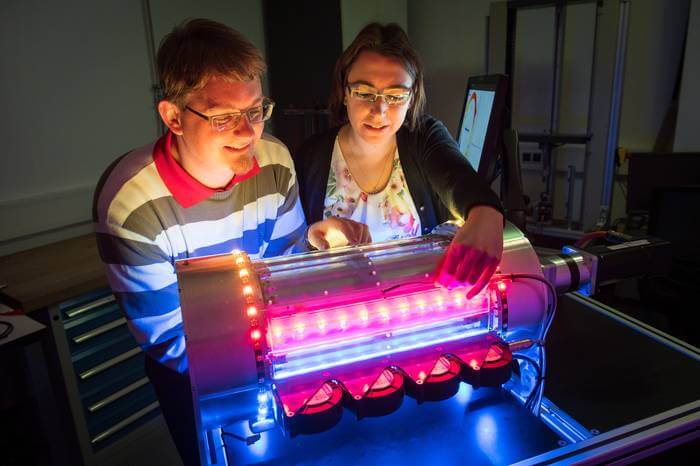 The first ever machine that cools air using ‘muscles’ made of nickel-titanium. Felix Welsch and Susanne Marie Kirsch helped to develop the cooling system as part of their doctoral research projects. The new type of energy efficient, ecologically sustainable cooling technology that does not require the use of climate-damaging refrigerants is currently being developed by Professor Stefan Seelecke and his team at Saarland University.

A new type of energy efficient, ecologically sustainable cooling technology that does not require the use of climate-damaging refrigerants is currently being developed by Professor Stefan Seelecke and his team at Saarland University.

The new technology makes use of shape-memory materials that are also known as ‘artificial muscles’. These materials are able to transport heat by loading and unloading nickel-titanium wires. Seelecke’s team is currently developing the technology for use in cooling systems for electric vehicles. The researchers have been presenting their technology at the Hannover Messe, showcasing the world’s first machine that can cool air by flexing artificial muscles.

From the humble fridge and air conditioner to complex cooling systems for use in industrial processes – keeping cool is a significant part of today’s society. Global warming and a growing world population mean that the need for energy-efficient cooling systems will only get larger. But low temperatures typically signify high electricity consumption, which in turn usually means a high carbon footprint and the risk of emissions of refrigerant gases that often have a high global warming potential. A research team of academic and industrial partners led by Professor Stefan Seelecke of Saarland University and the Center for Mechatronics and Automation Technology (ZeMA) is currently developing an environmentally friendly cooling system.

‘Our process is energy efficient and doesn’t require the use of refrigerants that are harmful to the climate. In fact, our technology is up to 15 times more efficient than systems based on conventional refrigerants,’ explained Stefan Seelecke. The EU Commission and the United States Department of Energy have both evaluated the new process and consider it to be the most promising alternative to the vapour-compression refrigeration technology in use today.

Seelecke’s team has developed the world’s first continuously operating prototype that cools air using this new process. The cooling technology that the team is showcasing at this year’s Hannover Messe uses artificial muscle fibres composed of bundles of ultrafine shape-memory wires made from the nickel-titanium alloy ‘nitinol’. These wires have the special property that they return to their earlier shape after being stretched or otherwise deformed. They are thus able to tense and relax like human muscles.

The reason for this behaviour is to be found within the structure of the metal alloy. The atoms in the alloy are arranged in a crystal lattice structure. If the nickel-titanium wire is deformed or pulled in tension, the layers of atoms in the lattice crystal move relative to one another creating strain within the material. This strain is released when the wire returns to its original shape. These changes in the material’s crystal structure are known as phase transitions and they cause the wires to absorb or release heat. It is this effect that Seelecke and his team are exploiting in their novel cooling system. ‘The shape-memory material releases heat to its surroundings when it is mechanically loaded in its superelastic state and absorbs heat from its surroundings when it is unloaded. And this effect is particular pronounced in the case of nitinol. When pre-stressed nitinol wires are unloaded at room temperature, they cool down by as much as 20 degrees,’ explained Stefan Seelecke, who holds the Chair of Intelligent Material Systems at Saarland University.

‘We exploit this property to dissipate heat,’ said Susanne-Marie Kirsch, who helped to develop the cooling system as part of her doctoral research project. ‘The basic idea is to allow pre-stressed, superelastic shape-memory wires to relax and thus cool the space by removing heat from it,’ explained Kirsch. The heat taken up by the shape-memory wires is then released externally when the wires are re-stressed in the surroundings.

However, the Saarbrücken cooling system is significantly more complex. The team has designed and developed a cooling circuit in which a patent-pending cam drive rotates in such a way that bundles of 200 micron-thick nitinol wires are alternately stretched and relaxed so that heat is transferred as efficiently as possible. Air is blown through the wire bundles in two separate chambers: in one chamber the air is heated, in the other it is cooled. As a result, the machine can cool and can heat. ‘When the wires are mechanically loaded they heat up by about 20 degrees, so that the process can also be used as a heat pump,’ explained Felix Welsch who also worked on the prototype system as part of his doctorate. Depending on the alloy used, the heating or cooling power of this new technology is up to thirty times greater than the mechanical power required to load and unload the alloy wire bundles. That makes the new system significantly better than currently available heat pumps and conventional refrigerators.

The cooling system is the result of many years of research in different projects, numerous award-winning doctoral thesis and close collaboration with the group led by Professor Andreas Schütze of Saarland University. Funding was provided in part by the German Research Foundation (DFG) through its priority programme ‘Ferroic Cooling’. Through a combination of experimental studies and numerical modelling, the researchers were able to optimize the underlying mechanisms and were able to determine how many nitinol wires need to be included in a bundle or what wire loading level was needed to achieve a specific degree of cooling. Building on these results, the research team is now able to customize the system. They have  developed a software package that allows them to simulate, plan and fine tune cooling systems for specific applications.

The Saarbrücken team is currently working on multiple projects aimed at further optimizing the heat transfer process and thus boosting the efficiency of the new technology even further. The objective is to get to a stage where practically all of the energy from the phase transition is being used for heating or cooling.

The researchers in Seelecke’s team are currently working on developing their elastocaloric technology for use as a cooling system in electric vehicles. Since January 2022 the team has been working with academic and industrial partners in the government-financed collaborative project NEKKA that aims to develop a novel elastomeric cooling system. The project will receive a total of €6 million in funding, of which around €1 million will be provided to the Saarbrücken team for their electric car cooling project. ‘Our aim is to develop, mathematically model and validate an alternative air-con system that can be used in all vehicle classes. The system will be able to provide vehicle heating and cooling while also being more efficient, more environmentally friendly and more sustainable than other previously available systems. Our technology will also be compacter, lighter and more cost-effective,’ explained Paul Motzki, a research engineer and managing director in Seelecke’s team.

To develop this and other smart material systems for commercial and industrial applications, researchers at the Intelligent Material Systems Lab have founded the spin-off company ‘mateligent GmbH’.