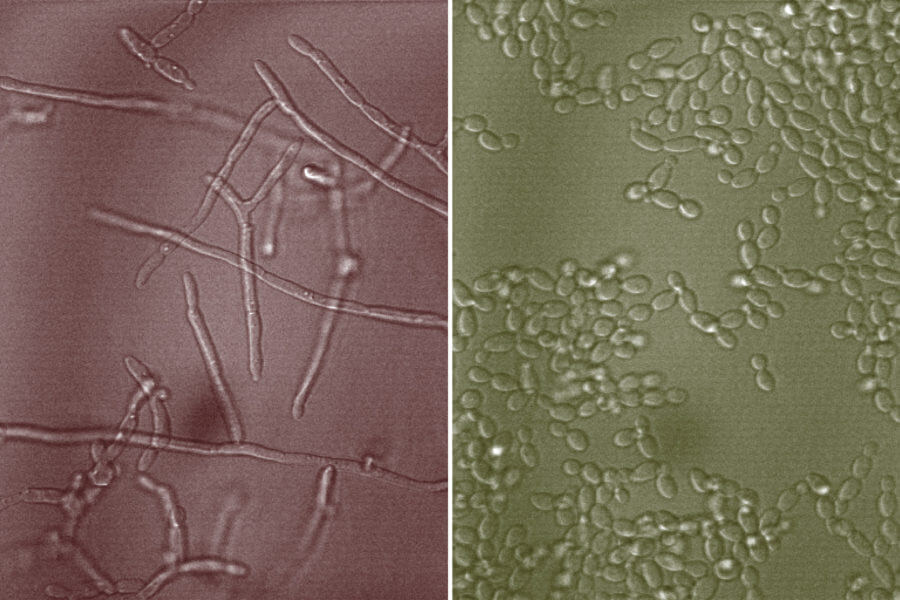 Candida albicans is a yeast that often lives in the human digestive tract and mouth, as well as urinary and reproductive organs. Usually, it doesn’t cause disease in its host, but under certain conditions, it can switch to a harmful form. Most Candida infections are not lethal, but systemic Candida infection, which affects the blood, heart, and other parts of the body, can be life-threatening.

MIT researchers have now identified components of mucus that can interact with Candida albicans and prevent it from causing infection. These molecules, known as glycans, are a major constituent of mucins, the gel-forming polymers that make up mucus.

Mucins contain many different glycans, which are complex sugar molecules. A growing body of research suggests that glycans can be specialized to help tame specific pathogens — not only Candida albicans but also other pathogens such as Pseudomonas aeruginosa and Staphylococcus aureus, says Katharina Ribbeck, the Andrew and Erna Viterbi Professor at MIT.

“The picture that is emerging is that mucus displays an extensive small-molecule library with lots of virulence inhibitors against all sorts of problematic pathogens, ready to be discovered and leveraged,” says Ribbeck, who led the research group.

Taking advantage of these mucins could help researchers design new antifungal medicines, or make disease-causing fungus more susceptible to existing drugs. Currently there are few such drugs, and some types of pathogenic fungus have developed resistance to them.

MIT graduate student Julie Takagi is the lead author of the paper, which appears today in Nature Chemical Biology.

Over the past decade, Ribbeck and others have discovered that mucus, far from being an inert waste product, plays an active role in keeping potentially harmful microbes under control. Within the mucus that lines much of the body, there are densely packed communities of different microbes, many beneficial but some harmful.

Ribbeck’s previous work has shown that mucins can prevent Candida albicans cells from switching from its round yeast form to multicellular filaments called hyphae, which is the harmful version of the microbe. Hyphae can secrete toxins that damage the immune system and the underlying tissue, and are also essential for biofilm formation, which is a hallmark of infection.

In mucus, yeast cells continue to grow and thrive, but they do not become pathogenic.

“These pathogens don’t seem to cause harm in healthy individuals,” Ribbeck says. “There is something in mucus that has evolved over millions of years, that seems to keep pathogens in check.”

Mucins consists of hundreds of glycans attached to a long protein backbone to form a bottlebrush-like structure. In this study, Ribbeck and her students wanted to explore whether glycans could disarm Candida albicans on their own, detached from the mucin backbone, or if the entire mucin molecule is necessary.

After separating glycans from the backbone, the researchers exposed them to Candida albicans and found that these collections of glycans could prevent single-celled Candida from forming filaments. They could also suppress adhesion and biofilm formation, and alter the dynamics of Candida albicans interaction with other microbes. This was true for mucin glycans that came from human saliva and animal gastric and intestinal mucus.

It is very difficult to isolate single glycans from these collections, so Hevey’s group at the University of Basel researchers synthesized six different glycans that are most abundant on mucosal surfaces, and used them to test whether individual glycans can disarm Candida albicans.

“Individual glycans are nearly impossible to isolate from mucus samples with current technologies,” Hevey says. “The only way to study the characteristics of individual glycans is to synthesize them, which involves extremely complicated and lengthy chemical procedures.” She and her colleagues are among a small number of research groups worldwide who are developing methods to synthesize these complex molecules.

Testing done in Ribbeck’s lab found that each of these glycans showed at least some ability to stop filamentation on their own, and some were as potent as the collections of multiple glycans the researchers had previously tested.

An analysis of Candida gene expression identified more than 500 genes that are either upregulated or downregulated following interactions with glycans. These included not only genes involved in filament and biofilm formation, but also other roles such as synthesis of amino acids and other metabolic functions. Many of these genes appear to be controlled by a transcription factor called NRG1, a master regulator that is activated by the glycans.

“The glycans seem to really tap into physiological pathways and rewire those microbes,” Ribbeck says. “It’s a huge arsenal of molecules that promote host compatibility.”

The analyses performed in this study also allowed the resarchers to link specific mucin samples to the glycan structures found within them, which should allow them to further explore how those structures correlate with microbial behaviors, Tiemeyer says.

“Using state-of-the-art glycomic methods, we have begun to comprehensively define the richness of mucin glycan diversity and to annotate that diversity into motifs that have functional implications for both host and microbe,” he says.

A library of molecules

This study, combined with Ribbeck’s previous work on Pseudomonas aeruginosa and ongoing studies of Staphylococcus aureus and Vibrio cholerae, suggest that different glycans are specialized to disable different kinds of microbes.

She hopes that by harnessing this variety of glycans, researchers will be able to develop new treatments targeting different infectious diseases. As one example, glycans could be used to either halt a Candida infection or help sensitize it to existing antifungal drugs, by breaking up the filaments they form in the pathogenic state.

“The glycans alone can potentially reverse an infection, and convert Candida to a growth state that is less harmful to the body,” Ribbeck says. “They also might sensitize the microbes to antifungals, because they individualize them, thereby also making them more manageable by immune cells.”

Ribbeck is now working with collaborators who specialize in drug delivery to find ways to deliver mucin glycans inside the body or on surfaces such as the skin. She also has several studies underway investigating how glycans affect a variety of different microbes. “We’re moving through different pathogens, learning how to leverage this amazing set of natural regulatory molecules,” she says.

“I am really excited about this new work because I think it has important implications for how we develop new antimicrobial therapies in the future,” Nobile says. “If we figure out how to therapeutically deliver or increase these protective mucin glycans into the human mucosal layer, we could potentially prevent and treat infections in humans by maintaining microorganisms in their commensal forms.”